The Absurdity of the New 'Great Game' in Central Asia 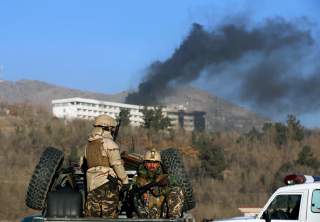 When the American people went to the polls in November 2016, they could be forgiven for thinking they had elected a president who might just bring the troops home from Afghanistan. After nearly seventeen years of grinding war in that poor, desolate and ultimately insignificant country, it seemed that Americans had finally had enough. However, in a classic symptom of what ails the Republic, the common sense instinct to pull the plug on a failed policy was overturned by military and foreign policy elites with a strong vested interest in current practices. As a recent Yale analysis candidly explains: “In the United States, a huge community of defense and civilian personnel earn a living counting on the endless nature of this war without saying so.”

One doesn’t have to be well versed in history to know that Afghanistan has been the graveyard of empires. That an entire British army was eliminated there in January 1842 yielding just a single survivor attests to the immense difficulty of the terrain, as well as the warlike inclinations of the local inhabitants. The Soviets met a similarly determined opponent, and it is a long celebrated plank of the American cold warrior ethos that the “genius” of aid to Afghan insurgents [Моджахеды Афганской войны] put the final nail into the coffin of the sclerotic Soviet leadership. Never mind that this aid seems to have had rather substantial blowback against U.S. national security interests.

Of course, there is the dreadful prospect of yet more Afghan and American casualties. Thankfully, U.S. fatalities have decreased due to the miracle of modern battlefield medicine, but what about the thousands who have suffered grievous wounds? Does anyone seriously believe that the armed forces’ incredibly high suicide rate is unrelated to the nature of counterinsurgency wars with excessive deployment schedules, no visible enemy, nor any endpoint? There is also the problem of wasted resources that now may well exceed $1 trillion. That money could have bought a lot of infrastructure at home—too bad. However, one of the very weakest arguments for “soldiering on” in Afghanistan concerns geopolitics: the soft underbelly of Central Asia, so the argument goes, must be guarded from encroaching Chinese and Russian influence. As on many issues related to this sad conflict, Americans are being swindled.

Occasionally, it has been pointed out that American lives and treasure in Afghanistan are going to protect Chinese investments. More recently, Afghanistan seemed to become yet another front in the “New Cold War” between Washington and Moscow as the Kremlin was accused of supplying weapons to the Taliban. But like many accusations hurled in the ever-more politicized atmosphere of U.S.-Russian relations, this charge seems to lack for any publicly verifiable evidence. Given the parlous state of U.S.-Russian relations, surreptitious initiatives in that direction by the Kremlin cannot quite be ruled out either, despite vehement denials from Moscow. Elsewhere, I have examined China’s unfolding strategy for Afghanistan, but a spate of recent articles in the Russian press, including the January 19, 2018 headline “Afghanistan Initiative Will Allow the Kremlin to Press on Washington” [Афганская инициатива позволит Кремлю надавить на Вашингтон] from Nezavisimaya Gazeta begs the question of Russia’s role in the reemerging “Great Game.”

The article takes up the issue of new negotiations at the UN Security Council, now under the chairmanship of Kazakhstan, regarding the situation in Afghanistan. These talks have been occurring over the last few weeks under the auspices of a C5 + 1 [Central Asia five including Kazakhstan, Kyrgyzstan, Uzbekistan, Tajikistan and Turkmenistan with Afghanistan] type format. Given Moscow’s extensive influence in all these states, it’s probably not an exaggeration to call this a Russian initiative. Moscow is calling for “direct talks” between the Afghan government and the Taliban in order to reach an “end to this fratricidal civil war” [прекращения братоубийственной гражданской войны]. Moscow is ready to offer a site for these talks, apparently, and the article notes that “Russia’s activism is not accidental” [активность РФ не случайна].

The piece dismisses allegations that Russia is supplying weapons to the Taliban as rumor-mongering by uninformed sources and, moreover, notes that “support has been expressed by Putin’s own lips for the continued basing of US troops in Afghanistan” [устами Путина выразила поддержку военному пребыванию США в ИРА]. This analysis does not rule out the possibility that China is partly behind Russia’s new efforts, especially under conditions of increasing “polarization,” wherein India and the United States are becoming closer. The author suggests that Moscow’s effort is an attempt to “seize the initiative from the West” [перехватить инициативу у Запада] with respect to peacemaking. Evaluating the potential of other potential peacemakers—whether Pakistan, Turkey or China—the author concludes that Russia and the Central Asian states actually might be “most appropriate in the peace-making role.”

Undoubtedly, Russians are watching closely to see how and if the Trump administration’s new strategy in Afghanistan could “turn the tide.” A November 24 report, noted with some optimism that Trump had observed that in Kabul an improvement might be in the cards [По его словам, в Кабуле уже открыто говорят о переменах к лучшему]. Now, that optimism seems a bit foolhardy. And indeed, a more skeptical headline appeared in the Russian military press early in 2018, suggesting that “Afghanistan Cannot Support Its Army without Financial Support from the USA” [Афганистан не сможет поддерживать свою армию без финансовой помощи США]. Unsurprisingly, there are numerous Russian reports of NATO ramping up efforts in the country—for example a new deployment of Czech soldiers—and also how NATO helicopters are replacing Russian models in Afghanistan’s Air Force. Like the rest of the world, the Russian press has also actively followed rumors of increasing Chinese involvement in Afghanistan. But in a December 2017 article, Russian expert Leonid Savin explained that China’s increasing presence does threaten Russia, since the two powers have joint interests in countering terrorism, narcotics and developing a peace process with moderate elements in the Taliban. According to Savin, “The financial strengthening of China in Afghanistan does not mean that Beijing will seek to dictate to Kabul. … [China] does not impose its conditions, nor interfere in political processes” [экономическое усиление КНР в Афганистане не означает, что Пекин стремится диктовать Кабулу … не навязывает свои условия, не вмешивается в политические процессы]. Another article suggests that Moscow’s foremost security concern does not actually relate to the other great powers, but rather that ISIS militants fleeing Syria could try to establish a new base in Afghanistan and thus threaten the stability of all of Central Asia. This threat has been noted by both Russia’s Foreign Minister and also the head of the Federal Security Service (FSB) within the last month.

A paradox is partially revealed in the foregoing analysis. Russia has many significant, and one might even say “vital,” interests in Afghanistan. While it does not have a direct border with Afghanistan, Russia is more than a little concerned that instability in the country could spill into into Central Asia. While Moscow is wise enough not to try its hand at military intervention (again) directly in Afghanistan, it has long maintained a sizable garrison in Tajikistan. For its part, China has similarly vital interests in Afghanistan, especially given its Belt and Road strategy, but likewise seems reluctant to commit its own troops to the fray. Some European countries like Germany arguably have a major interest in Afghanistan—that is to say in keeping Afghan refugees out of their respective countries—and so have some “skin in the game.” The absurdity is that the United States does not have significant national security interests at stake—yet pays the cost of being involved in the conflict.

There are no current rationales that justify the United States continuing its fight in Afghanistan. Perhaps the least ridiculous rationale is to try to further stabilize a nuclear-armed Pakistan, but as a wise column in the 28 January 2018 New York Times explains: “… the more violent the Afghan War became … the more it destabilized Pakistan.” While the “Blob” is ever more taken with the theory that pressure on Pakistan can “turn the tide,” this is most surely a pipedream. They must confront the reality that just as the fate of Vietnam was ultimately decided by Vietnamese, the future of Afghanistan will likewise be decided by the Afghan people. To the contrary, if the Afghan Army cannot beat the Taliban with all the help and firepower that have been provided over the last fifteen plus years, there is evidently something deeply rotten and corrupt in this force. Or maybe, like the South Vietnamese Army (ARVN) and other failed armies the United States has tried to build from scratch in Iraq or Syria, this one also finds it much easier to call in the Americans when things get tough.

As in Vietnam, the war in Afghanistan is being fought at least “70% to avoid a humiliating US defeat.” In other words, Washington has not changed much since the early 1970s. In mid-2017, Ted Carpenter wisely wrote that “If Russia wants the Syria mess, let them have it.” The same logic applies to the even more obvious example of Afghanistan.