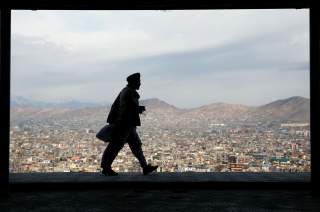 Expectations for an Afghan peace process grew last month with the Taliban’s release of a letter addressed to the American people offering to negotiate. It was followed more recently by Afghan president Ashraf Ghani’s unconditional willingness to recognize the Taliban as a legitimate political party and other significant concessions. Reacting to the two initiatives, many have concluded that the ice has been broken in finding a political solution to the Afghan conflict.

Yet cautiousness if not cynicism is in order. The content of the Taliban’s letter and subsequent messages should leave little doubt of its intentions. Rather than laying the ground for talks, the overture was designed to weaken the resolve of the American public and elected officials to support the continued presence of U.S. troops in Afghanistan and to drive a wedge between the Kabul government and the United States. Displaying a sophisticated understanding of psych-ops, the Taliban’s letter reflects a careful reading of the American public’s debate and frustrations over the Afghan war. By excluding the Kabul government as a participant in negotiations, the well-crafted three-thousand-word message also seeks to fuel long-standing suspicions in Kabul of a deal being struck behind its back.

Several factors seemingly contributed to the timing of the Taliban peace offensive. Appearing just prior to the Kabul conference, the letter offered the opportunity to upstage the twenty-five-nation meeting that Ghani used to reach out to the Taliban. It also followed a comment by President Donald Trump declaring “no negotiations” with the Taliban anytime soon, as well as President Ghani’s declaration, made after a series of deadly terrorist attacks, that the Kabul government would only talk to insurgents with “no blood on their hands.” Both statements allowed the Taliban through its peace initiative to suggest that the onus for prolonging the war belonged elsewhere.

In a more broadly calculating way, the Taliban’s peace offensive also comes after months of a sharply augmented air campaign by the United States that has apparently arrested the momentum of the Taliban insurgency and forced it to adjust its military tactics. By offering the prospect of negotiations, the Taliban may have hoped to restore the terms of military engagement that existed prior to Washington’s proclaiming its new strategic approach last August. Previous policies limited U.S. operations against Taliban forces in Afghanistan to a defensive response to attacks in hopes of encouraging and facilitating negotiations. Even now, while U.S. military thinking believes that only from a clear position of strength can the Taliban be forced to the bargaining table, the Taliban’s Quetta Shura senior leadership continues to enjoy immunity from drone attacks inside Pakistan. The Taliban as an organization also remains conspicuously off the United States and internationally designated terrorist lists.

Almost all of the current attention is focused on getting the Taliban to negotiate as though negotiations were an endpoint rather than the beginning of an almost certainly difficult process. Absent from the discussions is whether there exists enough common ground on substantive issues at present to warrant pushing for talks. The experience of peace processes elsewhere instructs us that negotiations, even those less complicated, are likely to drag on for years. The question also naturally arises as to who can speak for a now more decentralized Taliban movement, much less for the other segments of the insurgency. And can the squabbling political elements composing the Kabul government be expected to agree among themselves on a power-sharing arrangement with the Taliban. Then too, who would enforce compliance with a settlement were one reached?

The language of the Taliban’s letter and its subsequent messages do little to suggest that it has altered its basic objective of achieving the restoration of an Islamic Emirate, whether realized through fighting or political means. President Ghani offers the Taliban an opportunity to compete politically in an open political system and acquire cabinet positions and governorships. But if generous terms for power-sharing were the Taliban’s aims, then these have been on the table for several years, even during the Karzai regime. The Taliban has never disguised its disdain for a pluralistic, democratic system whose constitution it rejects as a foreign import. A Taliban envisioned Emirate would be headed by a religious figure whose absolute authority is legitimized by his piety and not through popular mandate. Although the Taliban promises to have a more tolerant and inclusive regime than during its earlier incarnation, political and social rights would only be guaranteed to the extent they were found in accordance with a Taliban interpretation of Sharia Law. On these, its own terms, the Taliban would probably be prepared to negotiate tomorrow.

In all probability, the various parties to the Afghan conflict will never sit around a table in Geneva or anywhere else and hammer out a grand bargain on Afghanistan. Failing that, the conflict will drag on, ending likely in one of two starkly different ways. The best-case scenario would be a Kabul government, bought time by the United States and its allies, that strengthens militarily and economically, and coheres enough politically to where it can gradually peel off large elements of the insurgency and marginalize the rest. The worst is that international fatigue and subsequent state failure result in a bloody, protracted and chaotic civil war that leaves Afghanistan a devastated, ethnically-fractured state threatening the region and beyond. The latter outcome is so disastrous that the United States, despite the long odds, has little choice but to stay the course in Afghanistan.