The Afghan War Is Not Lost 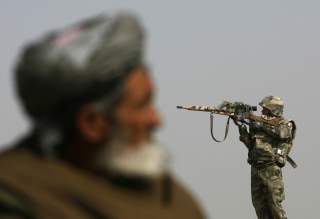 Sixteen years after the United States first sent troops to Afghanistan, U.S. military commanders describe the war there as stalemated. The Trump administration has initiated a major strategy review, and the Pentagon reportedly seeks to add several thousand American troops to the 8,400 already in Afghanistan. More troops can help achieve American objectives in Afghanistan, but only if they are part of a larger and more effective strategy. That will require a change of course.

The current approach is plainly inadequate. Although more Afghan forces are trained and in the fight than ever before, the Taliban today controls more territory than at any time since 9/11. Faced with corruption and exclusionary politics, popular opposition to the government in Kabul is rising, while the Taliban makes inroads in rural areas and, increasingly, near the cities. According to the U.S. government, some twenty insurgent or terrorist groups now operate in the Afghanistan-Pakistan theater, including ISIS, Al Qaeda and the Haqqanis—the world’s highest concentration of extremist networks.

The primary objective of U.S. strategy has been preventing Afghanistan from once again becoming a safe haven from which terrorists could launch attacks against the United States and its allies. As the Taliban and other extremist groups have regained strength, U.S. focus has been to prevent the collapse of the central government while continuing counterterrorism operations. In practice, this has involved training and advising Afghan security forces, coupled with air attacks on Taliban forces and direct action against terrorist networks.

With this approach, the addition of three or five thousand American troops will accomplish little beyond helping to secure the Afghan government’s control over major urban areas. A more effective political-military strategy in Afghanistan would draw on the lessons learned—at painful cost—over a decade and a half of war.

The first lesson is the risk of withdrawal. Some administration officials are reportedly arguing not to increase the American commitment to Afghanistan but to end it. While such sentiments are understandable after so many years of war, they are also dangerous. American disengagement from Afghanistan would risk repeating the catastrophic effect of U.S. withdrawal from Iraq, after which the Islamic State created the largest terrorist sanctuary in history. Indeed, the United States has learned this lesson in Afghanistan itself, which was abandoned by the international community after the Soviet defeat, descended into civil war, and ultimately became the pre-9/11 Taliban-led sanctuary for Al Qaeda.

Second, the military effort must support a realistic political strategy. The reality is that the United States and its allies cannot defeat the Taliban on the battlefield in any reasonable timeframe or with any reasonable expenditure of resources. The only alternative to endless war in Afghanistan is a political settlement that induces the insurgents—or a significant proportion of them—to lay down arms in return for a share of political power. A cease-fire and peace talks should be the eventual aim of U.S. policy. But first, the conditions for success must be set.

The “Afghan-led, Afghan-owned” approach to diplomacy has failed. Rather than exhorting Kabul to talk with its enemies while attacking them where it can, the United States should play a far more direct role in seeking a brokered outcome. The recent resumption of the quadrilateral group that brings together Afghanistan, Pakistan and China with the United States offers the chance for Washington to outline realistic scenarios and actively lead talks. Given the importance of diplomacy to any successful outcome in Afghanistan, the State Department’s decision to eliminate the senior representative for Afghanistan is concerning. An urgent task should be to name an experienced American diplomat to take up these responsibilities.

Third, such an effort requires leverage, and here recent history is depressingly instructive. President Obama’s surge of troops in Afghanistan pushed back the Taliban and, combined with a relentless drone campaign, helped decimate Al Qaeda there and in Pakistan. But the announcement of a withdrawal deadline—for the surge forces and then for all U.S. personnel—undermined the surge’s effectiveness. The Taliban will not negotiate if they believe they can wait out the United States and ultimately win the war.

The centerpiece of the administration’s Afghanistan strategy must therefore be a clear and sustained American commitment to Afghanistan. By forswearing deadlines and making clear that the United States will support the Afghan government and security forces indefinitely and until they are able to hold their own, Washington can telegraph to the Taliban that it will not succeed in retaking the country. It can show the Afghan people that the government in Kabul has an enduring security backstop in the United States and its allies, and demonstrate to Pakistan that its continued ties to insurgent and terrorist groups have diminishing returns. At the same time, aid to Afghanistan should be calibrated: more for a government that rules inclusively and reduces corruption; less for a government that fails in these respects.

Fourth, the training and advising effort must be more effective. Here there is an encouraging lesson: the embedding of U.S. personnel in Iraqi combat units, combined with close air support, has dramatically increased their effectiveness in retaking territory from the Islamic State. A similar approach in Afghanistan would strengthen Afghan security forces, which have proven that they are willing but not fully able to fight for their country. This would require several changes: placing American military advisers down at the battalion level where they can advise Afghan commanders closer to their operations; sending more qualified and better trained advisers (the best adviser for an Afghan battalion commander would be a former U.S. battalion commander, not an officer who has had just two weeks of training to be an adviser); and providing Afghan forces with more intelligence, close air support and fire support to enhance their success in operations.

Fifth, Pakistan’s enduring support and sanctuary for terrorists and Afghan insurgent groups represent an arrow directed at the heart of the American war effort. It’s unlikely that any new pressure will flip Islamabad’s reading of its strategic environment, or its perceived need to hedge against Indian encirclement. But Washington should aim for more modest gains. Less help to fewer insurgents would make a difference, and American aid to Pakistan should be conditional upon such changes. The administration could start by revoking Pakistan’s status as a non-NATO ally. While largely symbolic, this would send a strong message to Pakistan that it will not be treated as an ally if it is not behaving like one. A more severe approach would be to threaten to formally designate Pakistan as a state sponsor of terrorism and sanction the Pakistani military members (and businesses) who have been directly involved in supporting groups like the Haqqani Network unless Islamabad ends its support for groups that are attacking and destabilizing Afghanistan.

Finally, the American people deserve to know and understand any new commitments made on their behalf. The president has delegated the authority to set force levels in Afghanistan to the secretary of defense, but as commander in chief he cannot delegate responsibility for the war. If President Trump is going to send additional Americans into harm’s way, he needs to take ownership of the effort and make the case to the American people. He should explain the theory of success, the stakes and why, after all these years, America’s longest war must persist.

Michèle Flournoy is chief executive of the Center for a New American Security (CNAS) and former undersecretary of defense for policy in the Obama administration. Richard Fontaine is president of CNAS and former foreign-policy adviser to Sen. John McCain (R-Ariz.).