The Agreement That Will Save Ukraine 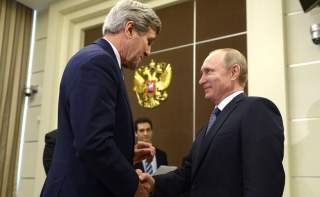 Despite the Minsk-II ceasefire agreement signed in February, the civil war currently being waged in eastern Ukraine between government forces and separatist rebels is all but frozen. In a pattern akin to the gradual collapse of the earlier Minsk-I Protocol, small-scale skirmishes have been frequent occurrences over the past five months, while more-recent battles foreshadow a return to larger, conventional military confrontations.

For those caught in the crossfire, the costs of the fighting continue to mount. To date, the conflict has claimed over 6,300 lives, wounded over 15,500 and displaced over 1.7 million people. The Ukrainian economy isn’t doing well, industrial production is collapsing and the value of the hryvnia has plummeted.

And yet, the war continues. Subsidized by the largess of foreign powers, the flames of civil war still burn. The United States and the European Union promised billions in aid to Kiev, committed military advisers and “nonlethal” aid to government forces and boosted NATO’s military presence in Eastern Europe. Meanwhile, Russia arms separatist rebels, mobilizes its forces on the Russia-Ukraine border and deploys Russian “volunteers” in eastern Ukraine.

These foreign investments in Ukraine’s internal war are motivated by larger geopolitical interests. For Moscow, Ukraine is a critical buffer-state separating the Russian homeland from NATO encroachment; the Black Sea Fleet—Russia’s means of projecting power in the Mediterranean—is based in Sevastopol; and control over Ukrainian pipelines is critical for Russian energy exports, on which the Russian economy relies. For Europe and the United States, a pro-Western Ukraine would represent the geopolitical containment of an increasingly assertive Russia. A consolidated Kiev could serve as an instrument for exerting pressure on Moscow. A government victory over Russian-backed separatists, however unlikely, would provide an important ideological victory for liberal democracy.

To be sure, these are important geopolitical interests for both sides. However, they are instrumental rather than intrinsic interests—they are means to ends rather than ends in and of themselves. The outcome of the Ukraine conflict does not pose an existential threat to Russia or the West, and consequently, there are limits to the costs these external actors are willing to pay to see their respective sides through to victory. While the conflict may warrant investment in the form of arms, equipment and financial aid, external interveners have never entertained the prospect of fighting a war against each other in the name of Luhansk or Donetsk.

Nonetheless, mounting tensions have given rise to mounting fears of escalation. In recent comments to the Russian news agency Interfax, former Soviet leader Mikhail Gorbachev registered his concern that the conflict in Ukraine might spark a larger “hot war” between the United States and Russia. “Unfortunately I cannot say for sure that a cold war won’t lead to a ‘hot’ one,” Mr. Gorbachev explained. “I fear they could take the risk.”

Gorbachev’s concerns have been echoed by former U.S. secretary of state Henry Kissinger. Testifying during a Senate Armed Services Committee hearing, Kissinger expressed his uneasiness about the prospect of “a process of military engagement without knowing where it will lead us and what we’ll do to sustain it.”

Both Gorbachev’s and Kissinger’s remarks reflect the strategic dilemma that underlies the West’s and Russia’s “competitive intervention” in Ukraine; the two sides have conflicting interests over the outcome of the civil war, but they have a common interest in the avoidance of direct confrontation. While the West and Russia are compelled to intervene, they are also simultaneously—and paradoxically—compelled to do so with restraint.

That both sides seek to regulate their competition and control escalation can be observed in the relatively reserved—and arguably somewhat strange—intervention strategies adopted by both sides. For example, the United States has already provided Kiev with over $100 million in “nonlethal defensive security assistance,” including armored Humvees, unarmed drones, and counter-mortar radars, and has deployed hundreds of U.S. advisers to train Ukrainian government troops that will eventually be sent to the front lines of the war. Yet to date, President Obama has been unwilling to provide the Ukrainian government with the weapons it has long requested. Concerns that transferring American-made arms might further provoke Russia and escalate the fighting has necessitated a more careful approach—one that signals restraint by drawing distinctions between “lethal” and “nonlethal” military aid and between “advisers” and “combat troops.”

Likewise, Russia’s deployment of “little green men”—seemingly professional soldiers in Russian-style combat uniforms with Russian weapons but without identifying insignia—and insistence that Russian soldiers fighting in eastern Ukraine are “volunteers” on “holiday” provides a means to annex and occupy Ukrainian territory while controlling escalation. The need to maintain plausible deniability for these foreign interlopers has required Russia to limit the scope of its invasion. It also provides the essential space needed for the West to save face and avoid a forceful counteraction that could spark a wider war with Russia.

The restraint of both the West and Russia is wise, but it is agonizing. It amounts to an intervention on the part of Russia that sustains the rebel insurgency rather than propels it to victory, and a corresponding intervention by the West that prevents the dislodging of government forces from eastern Ukraine rather than ends the civil war. For external actors, “not losing” has become more important than “winning”: neither side is willing to pay for victory, yet neither side is willing to concede defeat.

The implications for Ukraine’s domestic combatants are significant. As long as external actors subsidize the internal conflict, neither the government nor the rebels are compelled to negotiate an end to armed hostilities. Yet precisely because their external backers seek to control escalation, neither side enjoys a decisive military advantage that can serve to win the civil war. The net result is a protracted internal conflict with little hope for compromise or resolution.

Consequently, solving the strategic dilemma that competitive intervention entails is a necessary prerequisite to the termination of the conflict. That means that efforts to end Ukraine’s civil war must begin with an external agreement between interveners—one that goes beyond internal ceasefire agreements like Minsk I and II by explicitly acknowledging both the West and Russia’s legitimate interests in the outcome of the conflict. Such an agreement will require compromise from both sides, including a recognition that Ukraine can be neither a satellite of the Russian Federation, nor a protectorate of the West. It will also require a commitment to end provocative military posturing across Eastern Europe and to cease the flow of military assistance—both “lethal” and “nonlethal,” “volunteered” and “deployed”—to Ukraine’s domestic combatants.

It is only when external powers end their meddling in Ukraine that an internal settlement to the conflict will be possible. Until that time comes, the strategic dilemma inherent in competitive intervention will continue to fan the flames of war.

Noel Anderson is a PhD Candidate at the Massachusetts Institute of Technology and an affiliate of the MIT Security Studies Program. His dissertation examines competitive intervention and its consequences for civil wars.