The AKP’s Worldview: Why Turkey Won’t Change Its Foreign Policy 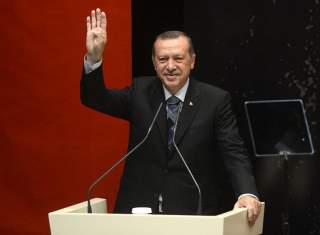 Turkey’s Justice and Development Party (AKP) defied the polls in last Sunday’s election, winning 49.4 percent of the total votes, totaling some 317 seats in parliament. The election came amid considerable unrest in Turkey. In the past six months, a two-year-old ceasefire with the Kurdistan Workers’ Party (PKK) broke down and the Islamic State has carried out five attacks inside Turkey. In neighboring Syria, Ankara remains mired in a proxy war with Iran and Russia, the two major supporters of Syrian President Bashar al-Assad. In other parts of the Middle East, Turkey’s once-promising effort to decrease tensions with regional states has failed, and Ankara now finds itself at odds with a sizeable number of Arab governments.

Despite numerous foreign policy challenges, the AKP is unlikely to change its foreign policy. The electoral outcome has strengthened the AKP’s hold over the Turkish bureaucracy, and bolstered Prime Minister Ahmet Davutoglu and President Recep Tayyip Erdogan. Both men view elections as a key pillar of Turkish foreign policy, and will therefore be emboldened by the party’s resurgent popularity.

The AKP and the “Praised Course”:

Both men believe that the country’s current foreign policy-related problems are temporary and that Turkey will eventually emerge as a regional leader. The AKP’s leadership argues that it is following a course that the Seljuk Empire began in 1071. In numerous public speeches, the AKP has referenced this “praised course,” implied that it is the natural successor to this movement, and that the realization of this mission is critical for realizing the stated objective of creating a “new world order.”

This praised course will unfold in three consecutive stages: first, in establishing the “New Turkey.” This will then lead to the development of a “New Region” in Turkey’s near abroad, which will ultimately result in the creation of a “New World.” To realize the first step, the creation of a New Turkey, the AKP argues that it must first create a strong democracy and strengthen the country’s economy. This will then trigger a similar process in Turkey’s neighboring countries.

To hasten this process, Turkey has sought to deepen its trade relations with all of its neighbors and ease visa restrictions. Thus, once the creation of a new regional order is realized, these interconnected states will be able to act closely together, in order to impose a new world; as a byproduct, this process would eventually result in Turkey having “zero problems with neighbors.” The AKP has chastised the current international order and has repeatedly called for the reform of the UN Security Council, arguing that the current regime has failed to address current world problem. On the campaign trail, Erdogan constantly argues that the world is “bigger than five” (referring to the UN Security Council) and has called for the abolition of Western monocultural dominance and “the return of Muslims to world stage.”

Humanitarian Diplomacy: Zeitgeist of the flow of history

Prime Minister Davutoglu suggests that the Western powers do not understand the current trend in the “flow of history” which began with the Arab Spring—and that their emphasis on realpolitik is incongruent with the needs of the region. Instead of a narrow interest-based foreign policy, Davutoglu favors “humanitarian diplomacy.” This refers to the provision of humanitarian aid and the funding of Islamic projects and NGOs, coupled with a rhetoric that appeals directly to the “Arab street,” instead of relying only on a relationship with a country’s autocratic leadership.

Davutoglu describes the pre–Arab Spring autocratic regimes as “leftovers” of the Cold War era, whereas all policies which do not embrace the amalgam of idealism and realism are considered to be leftovers of the twentieth century. Within this constellation, the AKP views itself as the only political power that has overcome the dichotomy between hard and soft power and therefore, at least in the short term, is prevailing in “principled loneliness,” a term referring to the temporary nature of the AKP’s problems with many Middle Eastern governments.

The West, Davutoglu argued, is dependent on autocratic leaders to maintain its influence in the region, whereas Turkey has the ability to leverage its cultural and historical links to appeal to the Muslim masses. This is linked to the AKP’s understanding of democracy and the idea of “national will” (milli irade) and Erdogan, who has been dubbed “the man of the people” (milletin adamı). These two concepts refer to the AKP’s sidelining of the military in Turkish politics and its marginalization of the secular elites, which the party argues does not represent the Turkish masses.

In reference to this constant struggle, Erdogan has also been dubbed as the “defender” of the “national will” (savunan adam). Hence, the mission to realize the praised course cannot be delegated to another party because they do not represent the national will—and therefore cannot be trusted to create the New Turkey. It also explains Turkey’s understanding of the Arab Spring and Ankara’s dogged support for conservative political parties.

In this context, the Arab Spring was seen as a window of opportunity to introduce the final stage of the so-called normalization of history. The election of Muhammad Mursi and like-minded conservative governments in Tunisia was seen as part of the inevitable “normalization of history”: the aforementioned three-stage process to create a new global order. Thus, even after the coup toppled Mursi in Egypt, AKP officials argued that the deposed president’s popularity would result in his return to power. This argument is underpinned by a steadfast belief that all of the region’s dictatorial regimes are either doomed to fail or be overthrown by “the people,” who will then elect a “man of the people.”

This approach explains Turkey’s Syria policy and its commitment to the Syrian people as well as its steadfast commitment to aiding in the overthrow of Syria’s President Assad. This policy is wedded to the AKP’s conception of humanitarian diplomacy and the idea that the Syrian people will elect a leader of their choosing. Regardless of Assad’s backing by Russia and Iran, it is a matter of time until Assad, as an unnatural leader, is overthrown and replaced by a true man of the people who will be a companion of the AKP, according to AKP’s narrative.

This understanding of the Syrian conflict helps explain Turkey’s policy towards Assad and the future of the Levant. Despite the fact, that in previous speeches Davutoglu refers to the Sykes-Picot agreement as a Western “attempt to make mischief” (fitna) and to alienate the region’s people from each other, it is especially the borders of Sykes-Picot that are essential to realize the Pax Turca under the banner of pan-Islamism. Deputy Prime Minister Numan Kurtulmuş declared in July that the West is trying to create a “Second Sykes-Picot” out of fragmented and failed states to foster its own rule over the region, diametrical to the AKP’s appeal to reunite under the common denominator of Islam.

The AKP’s unofficial allies in the fulfillment of this vision in Syria are Islamist groups such as the Islamic Front, a merger of several factions fighting in Syria that includes the Salafi Ahrar al-Sham, which are discredited by the West and the US. The Islamic Front released a letter of congratulation on Twitter addressing the AKP’s victory on November 1, after election results were announced.

Consequently, this notion explains the AKP’s grip to power which is directly related to its foreign policy vision and resistance to any changes in foreign policy. Within this conception, a Turkish political landscape without the leadership of the AKP after the November 1 elections was never existent for Davutoglu and Erdogan, since it is only with the AKP and their like-minded “brothers” from the ranks of political Islam that “history will finally find its normal river bed.” All obstacles to the fulfillment of this praised course are abnormal irritations of history that might postpone, but never will halt the irreversible proper flow of history. The November 1 elections seem to prove exactly this AKP narrative.

Nuray Atmaca is an expert on Turkish foreign policy based in Geneva. Currently she is working as researcher and assistant to the Senior Executive Team at the Geneva Centre for Security Policy (GCSP).