The Balkans Will Be America and Russia's Next (Virtual) Battlefield 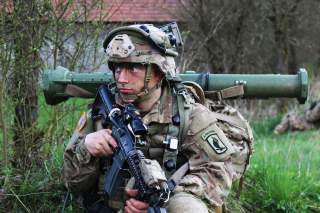 U.S. interest in the Balkans has waxed and waned. It is time for wax on.

The Balkans have been on America’s back burner since the end of the Clinton era. Investing some attention and exerting some influence on the region should be more than a second-tier item on the administration’s foreign policy agenda.

Few would argue that the peace and stability of western Europe shouldn’t be a vital interest of the United States. The greatest external threat to a stable Europe is Putin. The Balkans is a playground for bad actors—and likely will be an increasing priority for them. Stopping these misadventures before they spin out of control just makes sense.

In the Shadow of the Kremlin

Russia has meddled extensively in Europe, and Moscow’s attitude toward the United States has become “explicitly belligerent.” That said, Putin has limited opportunities for further provoking the West. That makes the Balkans a more likely target for Russian interference.

Ukraine is an active and debilitating conflict, but it is, in some ways, a frozen one. Putin has failed to live up to his obligations under the Minsk Agreement, and there is scant prospect that the 2015 deal, often called Minsk II, will bring peace. Certainly it doesn’t preclude more war.

At present, however, Minsk II is all that is on the table. Meanwhile, the United States and the Europeans have clearly signaled that, while the sanctions on Russia tied to implementation of the agreement will be reviewed periodically, the near-term prospects for sanctions relief are nil.

At the same time, U.S. officials have signaled continuing support for Ukraine. In February, Trump told a prominent Ukrainian parliamentarian that the United States wouldn’t push for lifting sanctions anytime soon. Only a week later, Trump included a statement of support for Ukraine in a letter to the Lithuanian president. More recently, Secretary of State Rex Tillerson has made similar pledges. A recent survey of experts concluded that, “two months into his presidency . . . the Trump administration [is] talking tough and taking diplomatic positions akin to those of his predecessor Barack Obama.”

These developments leave little space for the Kremlin to ratchet up its antics in Ukraine without further antagonizing both the Europeans and the Americans.

Nor do Putin’s prospects in the Baltics look any brighter. Russian activity—from military deployments in Belarus, to energy blackmail, to cyber shenanigans, to aggressive disinformation and active-measure campaigns—have alarmed to the region to no end.

Indeed, talk of military intervention from Moscow has reached levels unmatched since the end of the Cold War. “Russia has developed the capability to launch an attack on the Baltic states with as little as 24 hours’ notice,” a Lithuanian intelligence assessment recently concluded. That dire warning dovetails with a report from RAND that concluded Russia could capture most of the Baltic states in a matter of days—even with a NATO intervention.

On the other hand, the transatlantic community has responded with reassurance that it will not countenance greater Russian rumblings in the region. The Nordic nations have made it clear that they consider the Baltics to be their security doorstep. NATO has beefed up deployments and military exercises in the region and stepped up its Baltic air-policing mission.

In short, Russia has drawn attention and support to the Baltic states like iron filings to a magnate. That significantly raises the stakes for further poking around from Putin.

His prospects in Georgia are also uncertain. Nine years after the Russo-Georgian War. Moscow still illegally occupies about 20 percent of Georgia’s territory. The occupied regions of Abkhazia and South Ossetia are slowly being integrated into the Russian Federation.

But despites Russia’s efforts to slow down Georgia’s integration into the Euro-Atlantic community, Georgia has made good progress. It has a close relationship with NATO, is an official candidate country and was recently granted visa-free travel by the EU. When Russia recently moved to allow South Ossetia soldiers to join the Russian military, the announcement earned a sharp rebuke from the United States.

Outflanking Europe through the greater Middle East also looks less likely. Even though Russia has established a large military footprint in Syria, it is hard to see how Putin expands his presence further in the region. Even while the Russians have been more prominent in Libya of late, these efforts seem more like probing for weakness than anything else.

The problem for Putin is that future U.S. policy in the Middle East isn’t looking like anything we have seen in the last eight years. Rather than pulling out, the United States looks to be moving back in, bolstering an anti-Iran coalition and making a more robust effort to tackle extremism in the region. As the United States reemerges as a dominant player in the Middle East, Putin’s place will shrink.

Battle for the Balkans

Should Putin opt to follow the path of least resistance, then the Balkans look like his best bet. They contain a number of locations that he could turn into real trouble spots. Here are some of the top concerns:

• Standoff in Serbia-Croatia-Kosovo. Talk of a miniature arms race may be overblown, but there is no question that tensions have ] ratcheted up. Serbia recently announced that it would receive additional armed helicopters from Russia. Kosovo has been threatening to stand up its own military. And nearly five thousand NATO troops are parked in the middle of all of this.

• Messiness in Macedonia. Russian meddling, corruption, squabbling with Albania and a muddled U.S. response have made for a toxic cocktail. Moscow seems intent on using the unrest to pry the tiny nation away from the West.

• Battling in Bosnia-Herzegovina. A burgeoning separatist movement in the Republika Srpska threatens to rekindle divisions that have simmered since 1995 and the Dayton Peace Accord. Putin seems happy to pour gasoline on the smoldering ashes.

Time for America to Up Its Game

The United States must tamp down Russian meddling on many fronts. In several key areas, the new administration has already demonstrated its resolve to protect U.S. vital interests—including the defense of the transatlantic community. But the Balkans remain a soft spot in U.S. transatlantic policy. We need to be more proactive there—and sooner rather than later.

There are a number of places where the United States should step up. Rather than butting heads with Russia head-on, however, much of what America can and should do to squeeze Putin’s malignant efforts out of the equation ought to focus on the region itself rather than on the Kremlin’s misbehavior.

• Improving Governance and Reducing Corruption. The United States and the European Union might team up to energize efforts to build stronger, more democratic, effective and resilient public and private institutions in the region.

• Combating Transnational Crime. Human trafficking, drug running, money laundering and other forms of organized, transnational crime are rampant in the Balkans. This activity is highly destabilizing and needs to be tackled.

• Preventing Transnational Terrorism. Islamist extremists have their eyes on the region as well. Italian police recently busted an Islamist terror cell that included at least one Kosovar. Several hundred individuals from the region have fought as jihadis in Iraq/Syria. Cooperating with the counterterrorism operations of Balkan countries should become routine.

• Managing Refugee Movement and Migration. Uncontrolled mass migration poses a grave and potentially destabilizing threat to the region, as it does with Europe as a whole. The transatlantic community ought to work in partnership to address humanitarian concerns in the Middle East and to reduce destabilizing conflict and human-smuggling enterprises that feed the flow from south to north.

Between indifference and military intervention lies a constructive space where the United States could accomplish much with a modicum of effort. Taking steps within that space to impede Russian attempts to destabilize western Europe should be a higher U.S. priority.