The Baltic Dilemma of Power vs. Order 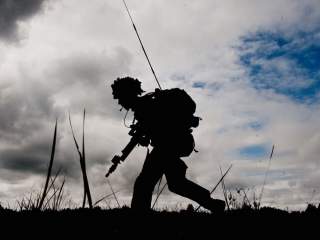 Last week, A. Wess Mitchell took to these pages to argue that a deterrence-by-denial approach for NATO’s most exposed frontline states (Estonia, Latvia, Lithuania and Poland) would make it militarily much costlier for Russia to attack our allies. In essence, Mitchell pleads for beefing up those states’ conventional defensive capabilities through training and equipping standing irregular forces, through supply of modern defensive equipment and milking favorable parts of geography, i.e., through flooding of transit routes in times of an attack. According to Mitchell, this localized miniature-type of deterrence by denial would “make it harder for an opponent to keep whatever territory he takes.”

While Mitchell deserves credit for highlighting the concerns of NATO’s frontline states, he misses two important aspects. First, he forgets to analyze which deterrence means are really needed from the perspective of those four states. A recent study found out that all frontline states would favor additional U.S. and multilateral (NATO) force deployments to their region—maybe even beyond the agreed measures of the 2014 Wales Summit. Disputes occurred, according to the authors of the study, mainly over the question of having permanent bases or persistent deployments instead. Interestingly though, Mitchell spends very little time on these important facts and suggests instead that the states in question should just prepare for a lonely struggle. This sends a very questionable signal and basically lets all other NATO countries off the hook on their support for frontline states.

Second, Mitchell’s proposal misses the need to create room for diplomacy, both within the alliance and vis-à-vis Russia. Particularly the latter point is surprising given that the custodian of modern deterrence theory, Thomas Schelling, always viewed the diplomacy tool of arms control as an inherent part of the deterrence logic. It is also surprising because NATO’s most successful defense strategies, such as the 1967 Harmel Doctrine, were combinations of elements of power and engagement.

The Dilemma of Power vs. Order

Mitchell’s sole concentration on deterrence by denial puts him in the corner of those who prefer a pure power response to the Russian aggressions. On the other side there are those who plead for more limited reassurance measures along the lines of the Wales Summit decisions, a resumption of high-level NATO-Russia dialogue, and a staunch commitment to the last remaining pillars of institutionalized order in Europe. Germany, but also Italy, Spain, Belgium and The Netherlands are amongst those allies that support a cooperative security order vis-à-vis Russia which relies on institutionalized arms control and confidence- and security-building measures as much as on strengthened defense. These states basically fear an unchecked build-up of arms in Europe.

At the surface, the question is whether allies should still feel bound by the commitments NATO undertook when signing the NATO-Russia Founding Act in 1997. Back then, allies confirmed that they had no plans, “in the current or foreseeable security environment,” for the “additional permanent stationing of substantial combat forces” on the territories of new member states. Russia committed to “similar restraint in its conventional force deployments in Europe” in return. Some analysts, mainly in the United States, argue that Russia has already violated the spirit of the Founding Act with its illegal actions in Ukraine and that therefore allies are no longer bound to it. Particularly Germany vividly opposes this stance.

Below the surface, NATO’s Baltic dilemma is a dilemma of either giving preference to power or giving preference to order. Especially the understanding of what constitutes order and how allies define order differs amongst NATO allies. NATO’s Western European allies such as Germany remember the Cold War as an extreme period of constant threat and its demise as the result of the successful combination of American military commitments (power) and arms control policies (order). The former helped to deter a Soviet attack; the latter helped to avoid the worst unintended consequences of the military standoff. This collective memory has led those states to startle in pain every time another arms control treaty collapsed during the last years. It makes them cling to the last remains of institutionalized order and to define security not solely in terms of power.

In contrast, NATO’s Central and Eastern European members do not share this experience. Theirs’ is a memory of Soviet aggression and repression. For them, order is predominantly dependent on the actions of the most powerful. That is why these states do not look to Berlin but to Washington every time Russia issues a new threat.

In Washington, meanwhile, a new foreign and security policy elite starts to emerge which is very much detached from the Cold War narrative of the successful combination of military power and institutionalized order. Pundits like Mitchell are much quicker in suggesting security through power than security through order because they have no experience with managing a highly dangerous and potentially deadly adversarial relationship.

In essence, NATO is still in search of the right strategy to confront Russia and to better defend allies—a strategy which brings together proponents of power and supporters of order. The upcoming NATO Summit in Warsaw should address this dilemma.

The good news is that NATO does not need to choose between power and order. It can pursue a policy that aligns those two elements. To begin with, NATO allies should remember an important lesson from the Cold War days. When the Soviet Union started to massively deploy its new three-warhead SS-20 ballistic missile from the mid-1970s onwards, NATO’s deterrence concept of flexible response came under enormous pressure. Not only did the Warsaw Pact enjoy superiority in the conventional realm, but the new nuclear deployments also tipped the balance in the realm of intermediate-range missiles. Confronted with this dual threat, NATO allies decided for a two-prong approach. As its name implies, the dual-track decision had two components. On the deployment track, NATO threatened to introduce 108 newly-built Pershing II ballistic missiles and 464 GLCMs to Europe. On the arms control track, NATO reached out to the Soviets and offered to forego deployment of the missiles if only Moscow would acquiesce and agree to negotiations aimed at achieving a balance at the lowest possible level.

As history tells us, the first round of negotiations (1981-1983) ended without any result and in November 1983 the first weapons were introduced to West Germany. When Mikhail Gorbachev took office in March 1985, INF talks quickly resumed. Only two years later, both sides finally achieved what almost no one would have expected when they met for the very first time. On December 8, 1987, Ronald Reagan and Gorbachev signed the INF Treaty which eliminated a whole category of nuclear weapons.

This historical example provides the blueprint for solving NATO’s Baltic dilemma. If the security situation around the Baltics does not change to the better, allies should pursue a new policy of dual-tracks – but this time in the conventional realm. Such approach would have a number of significant benefits.

NATO would play the ball back to the Russians by confronting them with an either-or-option. Either, Russia would agree to arms control talks for the Baltics with the clear goal of a mutual and verifiable restraint regime for the Baltic region (in that case NATO would forego deployment) or Moscow would face a considerable build-up of permanently stationed, defensively-oriented, multilateral NATO forces close to its border. By doing so, NATO could force Russia to the table to negotiate a sub-regional arms control regime, consisting of mutual geographically limited measures of military restraint, coupled with intrusive confidence- and security-building and transparency measures. Such dialogue could even open up the way for broader discussions about European security, the wars in Ukraine and Syria as well as potential cooperation to counter common threats like Daesh.

NATO would have enough time to publicly communicate to Russia (and to other countries concerned) the size and intention of its defensive deployments. By doing so, Russia would not face a fait accompli and could not portray it as treachery. By realigning the two grand approaches to security, that is power and order, NATO allies could close the ranks and make sure that the alliance remains unified in their responses to the Russian threat. A military means-only approach would leave important allies such as Germany extremely unhappy.

By setting a deadline, NATO would avoid endlessly protracted consultations which Russia could use to distract NATO’s attention away from the overarching goal of reassuring our Baltic allies. If talks were to run aground because of Russian intransigence, NATO could still deploy without having to carry the international blame for its allegedly ‘aggressive’ policy. More likely Moscow would be viewed as the main spoiler in the game. Even if consultations would not yield an immediate outcome, allies could still continue the dialogue with Moscow in the hope that more favorable conditions might emerge in Russia. As we know from the INF-experience, nothing is impossible in ‘Mother Russia’.

While all suggestions from the ranks of power-embracing pundits of how to secure the Baltics and deter Russia have certainly their merits a responsible foreign and security policy should never ignore the benefits of diplomacy and communications. Experts like Mitchell seem to think that beefing up defense itself is enough. But history suggests that the mix of defense and engagement can be much more productive. An arms control offer, coupled with a deployment threat, is the best way to defend NATO’s frontline states, to deter Russia and to kick-start a dialogue with Moscow which could lead to laying the foundations for a more peaceful West-Russian coexistence.