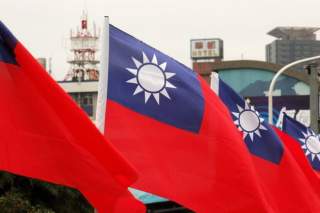 Leaders of the Chinese Communist Party (CCP) and the Kuomintang (KMT) will meet in Beijing on Monday to exchange opinions on “issues of mutual concern.” At the top of the list will be the KMT’s prospects for presidential and legislative elections scheduled for January 2016, and contingencies should the KMT lose.

That symbolic breakthrough was the last dose of positive news for the KMT and the Ma Ying-jeou administration. President Ma, who stepped down as KMT Chairman in December following devastating losses in local elections in November, has witnessed a wave of social protests, a student occupation of the legislature and the demise of an economic agreement with China that was intended to be the keystone policy of his second and final term.

The depth of Taiwanese people’s disapproval of President Ma has severely damaged the KMT’s chances of retaining the presidency. The scrimmage to succeed him has exposed a lack of viable candidates and the escalation of factional battles and grim succession politics raises the specter of splits that have historically afflicted the party. Not only does the KMT face the impending loss of the presidency, there is a chance that the China-leaning Pan Blue alliance in which it is the major partner may lose control of the legislature for the first time. It is a prospect that should provide plenty for Chu and Xi to ruminate on.

The CCP and KMT have a long and tangled history and the contemporary impasse over Taiwan’s status and its relationship with China is to a great extent a legacy of ideological (and at times bloody) battles between the two parties. In recent years, the two old adversaries have discovered common ground—as they did many years ago in the fight against Japanese imperialism. Both oppose “Taiwan independence” and both believe that increased economic interactions are inevitable and good for Taiwan.

For some among the KMT, and unanimously in the CCP, the hope and expectation is that economic interaction will draw the two sides together, facilitating eventual political union. The common ground between the CCP and KMT is embodied in the shared endorsement, if not understanding, of the so-called “1992 Consensus” (“one China, separate interpretations”). This face-saving conceit has proven useful as the basis for the détente policies of the last seven years. It has also ossified as the major distinction between the DPP and KMT. Since China’s bottom line is acceptance of the one China principle and the DPP rejects the “1992 Consensus,” the KMT portrays itself as the only party that can deal with China—simultaneously Taiwan’s most important economic partner and an existential threat.

Given the KMT’s current weaknesses in other sectors (like the economy, previously a strength), the party will try to increase the salience of cross-Strait relations in the run up to the 2016 elections. Chu’s meeting with CCP general secretary and Chinese president Xi Jinping helps that cause.

The KMT has attacked the DPP’s traditional blind spot on China policy to a greater or lesser extent during every presidential election campaign. Seeking reelection in 2012, President Ma scored points by attacking Tsai Ing-wen’s untested “Taiwan consensus.” In light of that defeat, the DPP launched a party-wide drive to address the perceived weakness of their China policy.

The heterogeneity of positions across the party meant that the ultimate policy recommendations did not radically differ from the “Taiwan consensus” (which urges caution in cross-Strait affairs and establishing bipartisan agreement and supervision before pursuing further economic policies with China). However, Tsai, who has again secured the DPP’s nomination, appears much more confident in her understanding and delivery of the DPP’s position.

At a party meeting in April, Tsai expressed her support for “maintaining the status quo” and “stability in cross-Strait relations,” remarks that won praise from officials in the United States. Earlier this week, though, President Ma used a long address to the Mainland Affairs Council to question how Tsai expects to achieve these goals while rejecting the “one China” principle and “1992 Consensus.” Tsai’s response should provide food for thought for Chu and Xi as they meet in Beijing: the Taiwanese people, she said, do not share Ma’s preoccupation with the intricacies of the “1992 Consensus” because they are too busy worrying about a swathe of economic and social ills.

If Tsai’s moderate rhetoric is sufficient to convince the electorate (and opinion polls suggest it is) that the DPP’s China policy won’t be a dangerous liability, the KMT has nothing left to fight with. Outside of championing the “1992 Consensus,” the KMT is bereft of ideas.

While President Ma delivered ECFA and a number of other practical, mainly economic agreements, the hopes that the CCP put in him to bring Taiwan and China closer together face a substantial setback. Suspicion of the KMT’s quick embrace of China and the failure of promised dividends coincides with surveys showing record (and increasing) levels of self-identification as Taiwanese and support for preserving Taiwan’s autonomy and continued separation from China.

Ma’s presidency has not only poisoned the well for the KMT, it has poisoned it for China’s integration-unification project (not that there has ever been a clamour for unification in Taiwan). No wonder the CCP is eager for a face-to-face meeting with KMT Chairman Eric Chu—the only man who has a chance to dig the KMT out of the hole it is in. Having retained his position as mayor of Taiwan’s largest metropolitan area, Xinbei City, by the skin of his teeth, during the carnage of local elections last November, Chu is the only KMT candidate with at least a chance of beating Tsai to the presidency. He is the only candidate with sufficiently broad support in both his party and the electorate. To date, Chu has been steadfast in his refusal to run.

Chu’s reluctance is strategic. Relatively young and very ambitious, he knows that mounting a challenge in 2020 is better than fighting a losing cause in 2016. Chu’s earlier promise to his Xinbei constituents that he wouldn’t relinquish his Mayorship to run for president provides him the cover to stand firm. By not running, Chu looks like a man who honors his promises and someone else will have to endure a thankless campaign.

If Chu sticks to his guns, the KMT’s prospects are bleak, and the lack of viable candidates may yet force his hand. House Speaker Wang Jin-pyng enjoys a measure of popular support and appears to be ready to throw his hat in the ring.

But Wang is embroiled in a civil war with President Ma’s faction and his nomination would provoke rebellion on the harder pro-China wing of the party. Other names include a motley crew of has-beens like Wu Den-yih and princelings who would be a liability in an election the DPP will try to center on economic-justice issues. As a measure of the KMT’s desperation, in recent days, the minority People First Party leader James Soong, who split from the KMT ahead of the presidential election in 2000 and polled 3 percent in 2012, has been mentioned alongside the likes of central banker Perng Fai-nan, Foxconn founder Terry Gou and Taipei Mayor Ko Wen-je. None of these are actually members of the KMT, nor have they expressed any enthusiasm to stand for the party in the presidential election. There are less than two weeks left until the deadline to enter the KMT primary—enough for Chu to change his mind.

The CCP will surely want to hear from Chu what the KMT intends to do to win the upcoming elections. However, noises coming out of Beijing in recent times suggest that the CCP is already working on contingencies, should the DPP win. Warnings about the gravity of accepting the “one China” principle are clearly aimed at the DPP—and Taiwanese voters.

Giving Chu a face to face meeting with the CCP could burnish his bona fides as a man they take seriously and can work with. This impression will dovetail with the joint recommendations and policies that are routinely announced at the KMT-CCP Forum which Chu will attend in Shanghai the day before.

For the Chinese side, with the political logics that prevail in the CCP, it is inconceivable that Chu won’t eventually throw his hat in the ring. But even if Chu does decide to run, the more likely outcome is that the next ROC President will be the DPP’s Tsai Ing-wen. Xi Jinping is more familiar with Taiwan than any previous Chinese leader and he will be aware of that. The key question is thus what the KMT and the CCP intend to do if the DPP wins the presidency, and in the worst-case scenario, controls the legislature, too.

During the last DPP presidency—Chen Shui-bian’s two terms from 2000-2008—the KMT successfully used its legislative majority (in concert with allies) to obstruct everything that the DPP tried to achieve domestically. For their part, the CCP refused to speak to Chen and did everything it could to strangle Taiwan’s external space. The KMT-CCP Forum itself was established as a means to allow the two sides to bypass the DPP. Evolving out of a think-tank set up by KMT Honorary Chairman Lien Chan, the forum paved the way for Lien to visit China in 2005, where he acted and was treated as if he were Taiwan’s elected leader, notwithstanding his actual defeat to Chen in two successive presidential elections.