The Bear Has No Claws: Is Russia's Massive Military Modernization Over? 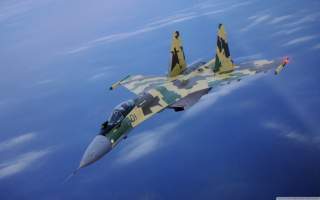 Russia's ambitious, decade-long plan for the modernization and expansion of its military capabilities is imperiled by current trends in the global economy. Economic slowdowns combined with more sources of supply—especially as previously inaccessible reserves have come online as a result of new technologies—are producing a glut of both oil and natural gas on world markets—decreasing prices and thus the export tax revenue which sustains the Russian federal budget. On top of that, the current expenses being generated as a result of Russian policy on Ukraine—the costs of absorbing Crimea (and the potential expenditures to support the separatist regions of southeastern Ukraine) plus the spending needed to cushion the impact of Western sanctions—are growing. In addition, sanctions are likely to shave at least 1 percent from Russia's planned economic growth for 2014, putting the economy into recession. Russian finance minister Anton Siluanov has bluntly noted that, in reviewing the defense program, the government needs “to reconsider the amount of resources devoted in the course of this new program, so that they are more realistic.” At the same time, however, Deputy Prime Minister Dmitry Rogozin, who oversees the Russian military-industrial complex, has vowed that the plan will stay on schedule.

The defense program is controlled directly by President Vladimir Putin, and the allocations cannot be changed by the Finance Ministry, so Siluanov's announcement appears to have been designed to send a shot across the bow and force a discussion of what choices ought to be made. In theory, the Kremlin could cut spending in other areas to keep funding for the defense buildup unchanged, yet that might imperil other critical initiatives—among them, the generous largesse designed to try and keep a lid on social unrest in the North Caucasus as well as the ambitious plans for developing the Russian Far East. It will certainly reopen the debate over how quickly and how extensive subsequent rounds of privatization of state assets and enterprises ought to be—but that carries with it other unintended consequences, such as loss of control and patronage by the Kremlin over key industries and sectors and the possibility that the main beneficiaries would be Chinese firms who have, in the past, been deliberately kept at arms length to limit the degree of influence they could extend over the Russian economy. Deficits in the budget can be funded, to some extent, by relying on the more than $90 billion stashed away in various reserve funds, but this does not provide a long-term solution.

Much depends on how far oil prices will slide. The Russians may have some reassurance that key swing producers like Saudi Arabia—who can impact prices by quickly bringing on or taking off the market their considerable excess capacity—need an oil price of $89 for their own budget to break even, and Riyadh has seen considerable expansion in their spending both to placate an increasingly restive populace at home and to support neighbors and friends. Most assessments state that Russia can maintain its current level of federal spending as long as oil prices do not fall below a mid-$80s/barrel benchmark. Another silver lining is that a sustained drop in oil prices will make a good deal of the shale/nonconventional oil currently responsible for the present glut in supply more expensive to produce. So Putin might be prepared to live with somewhat-lower energy prices and accept "deficit spending" as a result, drawing down on the reserve funds, for the foreseeable future.

But decreases in Russian state income will add pressure to find cost savings and efficiencies in the defense buildup. Here, the series of Western sanctions imposed on Russia because of Ukraine may exact a cost. A number of off-the-shelf technologies, as well as defense platforms that the Russians were expecting to buy on open markets are currently not available. It will take both time and cost to develop in-house, indigenous replacements.

It will also increase pressure on the Russian defense industry to continue to find overseas customers who will help defray the costs for research, development and production. India remains a leading customer for Moscow's arms exports, but the United States has been cutting into Russia's margins. Other rising powers—Brazil among them—are being courted by the Russian defense industry—but competition from Western firms is fierce. Countries like Vietnam and Venezuela remain reliable purchasers, but do not have the budget to bankroll major increases.

The real question is whether Russian defense firms can become leaner and more efficient—guaranteeing that Rogozin's schedules can be met on time, even with lessened budget outlays; in other words, finding ways to reduce the per-unit cost of equipment being delivered to Russia's armed forces. Given that this sector of the economy has never been known for efficient utilization of resources, and with little incentive to pursue serious anti-corruption efforts in the defense industry (where it has been easier to simply spend large amounts of money and accept some of it will end up diverted), it does not seem realistic to expect significant savings through reform.

Where this may lead, in the end, is to the 80-percent solution. As long as a majority of the defense rearmament and modernization targets are hit, exact fulfillment on the existing schedule may be left by the wayside. This may be done either through reducing the size of procurement, or spreading out the program (currently expected to conclude in 2020) out along a longer time horizon. The Russian defense establishment may also learn to become comfortable with less—and decide, as in the case of nuclear weapons, that they can ensure their security with less. If, even despite the crisis in Ukraine, there is no significant increase in either spending or procurement on the part of the European NATO nations, then Russia may be able to relax some of its targets.

Last October, I noted that "any major collapse in the price of energy imperils" Russia's ambitious defense-spending plans, but if they "are not met in full, the Russian military [will grow] stronger." Even with Russia's current economic woes, this assessment still stands.