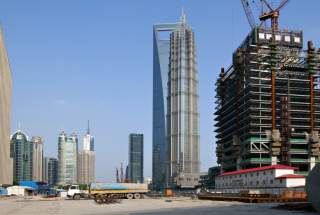 For some time now, a number of analysts have been warning that the boom in China’s housing sector could be the catalyst for a major economic collapse in that country. Such warnings are probably overdone, however, for the simple reason that the Chinese housing market is neither free, nor does it really reflect market forces. But that does not mean that the slowdown in China’s housing sector is not an ominous development.

Since the economic crisis began in the United States and Europe in 2008, the global economy has undergone a massive change, with exports by the developed nations falling and nations such as China scrambling to adjust to this reality. In order to avoid the paramount threat of political instability implied by falling export earnings and employment, China launched into a period of massive internal investment and development that not only caused a bubble in domestic housing prices, but distortions in global markets for commodities and even housing around the world.

China’s National Bureau of Statistics reported a surge in home sales after the 2008 subprime crisis, followed by a collapse in volumes that saw sales actually fall in the first half of 2013. Much of the construction and sales of housing in China was fueled by a vast increase in credit provided by China’s state-controlled banks and companies, this again following the imperative of creating growth in order to offset the decline in earnings from exports.

Esther Fung of The Wall Street Journal reports that the slowdown in China’s housing market has had a ripple effect throughout the economy, causing a decrease in spending for goods and services that runs counter to official targets for growth and employment. But the sad fact is that much of the housing construction activity in China over the past several years was neither rational in economic terms, nor sustainable in terms of basic financial mechanics. But that does not mean that China is facing a Western-style financial correction, much less a collapse.

Empty buildings and whole cities testify to the massive misallocation of resources in China, all steered by an authoritarian regime that is concerned first and foremost with political stability as opposed to economic sustainability. China’s housing market, which has only existed for the majority of Chinese since the mid-1990s, has been fueled by new construction driven by a natural desire of Chinese to improve their standards of living. After 2008, when economic activity in China actually fell, government agencies at all levels frantically targeted housing as a key part of the economic rescue plan.

The decision by Beijing in 2009 to spend nearly four trillion yuan on investments in basic industries was mirrored by regional governments, creating a massive increase in domestic spending that helped to blunt the effect of the global recession on China’s economy. In that year, nearly one-third of the credit provided by Chinese banks was related to real estate, and this allocation, if anything, has only increased since then. But Western observers should be careful not to think that a surge in “lending” by state-controlled banks and companies will necessarily lead to a Western-style correction, as bad loans cause capital losses. In China, the Communist Party simply allocates more resources to paper over credit problems.

Much of the investment in China from 2009 onward came from the government’s direct and indirect purchases, rather than from the banks and state-sector enterprises, but this huge injection of demand-side stimulus had the effect of also bolstering housing. Incomes were supported, allowing China’s citizens to participate—and speculate—in the increasingly liberalized housing sector. The subsequent loosening of Chinese monetary policy only helped to propel the housing sector even faster. By 2009, monetary growth was in excess of 25 percent (if official statistics are to be believed). But the key point to understand is not economic, but rather that the political decision was made by the Communist Party to push consumption.

Government intervention had not only cushioned the decline of housing prices in China in the 2007-2008 period, but by 2009, housing sales volumes and prices had returned to pre-crisis levels. After four years of torrid growth, however, a number of experts on the region see China heading into an inevitable period of “adjustment.” But again, don’t be fooled into thinking that this change in the rate of increase in housing prices and construction will be like that seen in Western market economies.

“We had a colossal credit bubble in China,” Marc Faber told Bloomberg TV earlier in 2014. “This bubble is now being gradually deflated and will bring about problems in the real-estate market and among some major players in commodity markets.” Faber is correct that some private firms in China may go bust due to a slowdown in housing, but don’t expect the kind of dislocation seen with the U.S. subprime crisis.

Foreign observers of China rightly note that the Chinese financial system is overleveraged; that nonbank companies and state-owned enterprises have become involved in the nation’s real-estate sector to a massive degree. This is just one reason, in fact, why the central government in Beijing has directed a slowdown in real-estate investment, part of a larger effort to cool speculation in real estate generally. But this does not suggest that China’s leaders actually have a coherent economic plan for the future. Author and longtime China observer James Rickards notes:

China’s problem is an over-reliance on investment to the exclusion of consumption. Investment makes up 45 percent of Chinese gross domestic product compared with about 20 percent in the U.S. Investment can be sustainable if it results in improvements to productive assets such as ports, roads and other critical infrastructure. China’s problem is that much of its investment is wasted on white elephant projects such as empty cities, monumental train stations, and unused airports.

Rickards notes that it is widely assumed that China will continue to grow at about 7 percent without interruption and will, in time, surpass the United States as the largest economic power in the world. But the real threat in China, both to its own people and to the world economy, comes from the fact that the economy remains largely a function of the state’s priorities, rather than a self-correcting, relatively free market system. If the politically motivated but economically worthless spending on housing and other infrastructure is subtracted from China’s GDP, in fact, the economy would be smaller and growing at a far slower rate.

The other aspect of China’s “great leap forward” in real estate since 2009 is the degree to which the massive increase in government spending by Beijing has leaked into the global economy, causing price increases in everything from raw commodities to foreign real estate. Chinese officials and business leaders now compete for pricey urban real estate in cities such as New York, London and San Francisco. Whereas China’s reinvestment of export earnings in mortgage-backed securities helped fuel the subprime boom prior to 2008, today capital flight by Chinese Communist Party cadres is helping to boost prices for luxury condominiums in Manhattan and homes around the United States.

The original intent of Beijing’s spending boom was to stabilize domestic markets and thereby avoid domestic political unrest, but the surge of investment and spending in China also has a profound inflationary impact on foreign-asset prices. Millions of Chinese have immigrated in recent years and more than half of the country’s wealthiest households want to depart, mostly for the United States, reports the Washington Post. The deceleration in Chinese spending on domestic investment may, at the end of the day, not only see a decrease in the domestic economy and real estate prices, but also have a significant impact on prices for a variety of assets in markets around the world.

Christopher Whalen is the author of the 2010 book, Inflated: How Money and Debt Built the American Dream, now in its second edition from John Wiley & Sons. He is coming out with a new book co-authored with Frederick Feldkamp entitled “Financial Stability: Fraud, Confidence & the Wealth of Nations” which is scheduled to be published by John Wiley & Sons in the second half of 2014. He tweets at @rcwhalen.