The Biggest Myth about North Korea 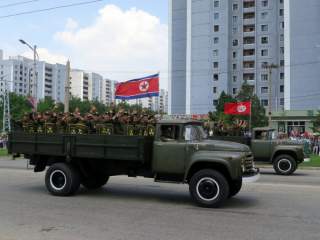 A million lives and a trillion dollars. Experts in the 1990s predicted that the costs of war with North Korea would reach at least this magnitude. While this is probably true of a worst-case scenario, and estimates would doubtless be even higher today, pundits and officials alike have allowed it to cloud reasoned judgment about North Korea. A strawman argument has taken hold that any actions against North Korea will lead to cataclysmic death and destruction.

This is wrong. Alliance military actions against North Korea will not automatically trigger a nuclear holocaust or the annihilation of Seoul. Fear, risk aversion and a misunderstanding of North Korea have allowed the most dangerous scenario to be conflated with the most likely one. Rather than being paralyzed by the fact that anything is possible, alliance policy and military planning needs to recognize a simple reality: no matter what North Korea threatens, it will assiduously seek to avoid war-triggering actions. North Korea’s own historical behavior and its widely presumed goal of regime survival confirms as much.

It isn’t hard to find pundits who would have us believe North Korea is prepared to immolate the Korean Peninsula in a blaze of glory at the first hint of conflict. One argument goes that offensive military action “likely would trigger a war which would devastate South Korea.” Another offers that even an “extremely limited” preemptive strike “…risks sparking a major military conflict…that might have devastating consequences for the [United States], Korea, and beyond...” Still others argue that there’s nothing the United States or South Korea can do because North Korean artillery aimed at Seoul prevents even minor military actions, implying that any attacks on North Korea will trigger the worst scenario imaginable. One analyst even pointedly remarks that using force against North Korea would be worse than allowing its nuclear program to expand.

Nor is this illogic limited to pundits; successive U.S. administrations have fallen prey to the same fear-based, rather than logic-based, thinking. During the George W. Bush administration, the prevailing view “…was that if any kind of military strike starts against North Korea, the North Koreans would invade…and they will cause enormous destruction of Seoul.” And former secretary of defense Robert Gates wrote in his memoir of the Obama administration’s hyperventilating pleas with the highest levels of the South Korean government not to retaliate against North Korea for its November 2010 artillery attack on Yeonpyeong Island.

Widespread fear of a North Korean total war is a pathology based on an imaginary North Korea. No matter one’s political leanings, right and left alike agree that North Korea’s primary goal is regime survival, meaning that North Korea will not only take actions to safeguard its regime, but also avoid taking actions that put its survival at risk.

This bears out in sixty years of observing North Korean behavior—even during the so-called “second Korean war” of the late 1960s, North Korea never escalated beyond isolated military attacks. Today, North Korea threatens South Korean NGOs that send propaganda balloons into its territory, yet fires at the balloons and not the people launching them. In repeated naval clashes with South Korea in the Yellow Sea, North Korea strikes some blows and suffers others, but it never escalates beyond the local clash. North Korea has had countless opportunities to escalate or broaden conflicts in a crisis, yet has consistently chosen restraint. Whatever North Korea’s rhetoric and motivations for violence, its track record shows a preference for not taking actions that would jeopardize the regime, and the North Korean escalation that everyone fears would do precisely that.

Even if North Korea responded with violence when attacked or retaliated against, there is a massive difference between responding with limited or tit-for-tat violence (its historical modus operandi) and responding with the most devastatingly lethal response it can come up with, like a nuclear first-strike or artillery barrages against Seoul. The latter are regime-ending actions, while the former may demonstrate resolve against the alliance and allow both sides a chance to sue for peace.

To be clear, we’re not saying conflict with North Korea is impossible. On the contrary, North Korean military adventurism may become more likely as it feels its expanding nuclear and missile capability affords it greater protections from retaliation. But such conflicts won’t escalate to an all-out war, even if the alliance responds to North Korean violence with a limited counteroffensive. We are also not calling for preventive strikes on North Korean nuclear facilities at this time. A disarming first-strike against North Korea requires answering many questions. How confident are we of destroying 100 percent of the targets? How far would a first-strike set back North Korea’s nuclear capabilities? How can we disabuse North Korea of the perception that the alliance is pursuing regime change (the one scenario that would trigger devastating North Korean retaliation)?

But we are arguing that it’s a mistake for alliance policy and military plans to be made on the assumption that any preventive or retaliatory strike inevitably escalates to total war and regime change. Not only is that contrary to North Korea’s own primary goal, it’s the kind of thing that paralyzes the alliance when faced with North Korean aggression.

Just because something is possible, doesn’t make it probable. As a matter of historical observation—not rational assumption—North Korea’s primary goal is regime survival, and its foreign policy is bounded by a logic of consequences. If we accept those two propositions, then we must plan and formulate policy not on the assumption that North Korea will escalate in response to any offensive or counteroffensive alliance action, but rather with the expectation that North Korea will seek to keep any military friction limited for the sake of regime survival.

The biggest risk facing Korea is not inadvertent war or North Korean escalation. It’s allowing Kim Jong-un to think North Korea has achieved a nuclear deterrent that gives it freedom of action on the Peninsula.

Van Jackson is a Visiting Fellow at the Center for a New American Security, a Council on Foreign Relations International Affairs Fellow, and author of the forthcoming book Rival Reputations: Coercion and Credibility in U.S.-North Korea Relations (Cambridge University Press). http://vanjackson.net.

Hannah Suh is Program Coordinator for the Asia-Pacific Security Program at the Center for a New American Security.