The Bizarre Reason Ukraine Could Be Facing a Legitimacy Crisis 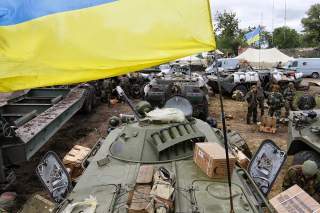 While political Washington is absorbed in its quest to figure out how Vladimir Putin managed to get Donald Trump elected president of the United States, Ukraine is facing a dire political crisis.

Since mid-December, about a hundred veterans of the volunteer military battalions, along with two members of the Ukrainian parliament, have been blockading rail transport in and out of the regions of Ukraine currently under rebel control. Ostensibly they are doing so to highlight the fact that, while the country is at war with Russia, trade is continuing with eastern Ukraine. Ukrainian soldiers are dying, they say, while other Ukrainians are reaping a handsome profit from the current situation.

All true, but this is only part of the story. While the Ukrainian government routinely speaks of war, it has carefully designated the current conflict as an “anti-terrorist operation” within Ukraine, leaving the legal status of the conflict with Russia as a separate, undetermined issue.

This has allowed the government to continue to trade with rebel regions, and to buy coal from there via companies incorporated in Kiev that are paying taxes to the Ukrainian government. The current status quo is the product of an inconvenient truth that few hardcore Ukrainian nationalists are willing to admit—that Donbass coal remains essential to Ukraine’s energy supply and overall economic well-being.

Many experts predict that, without Donbass coal, Ukraine faces the risk of rolling blackouts, with major industrial facilities and large cities such as Kiev, Chernihiv and Kharkiv most at risk. Economic growth will certainly take a hit. The government’s projected 3 percent GDP growth for 2017 risks being cut in half—with the loss of seventy-five thousand jobs to boot. And the government’s scenario is in fact rather optimistic. Depending on how long the blockade lasts, some independent economists predict the economy might actually contract by 0.5 percent. In any case, the government will need to find another $1.5 billion for its already ballooning budget deficit. Should this be the case, the deficit targets agreed to with the IMF will not be met, and IMF funding for Ukraine imperiled.

The blockade, which is now entering its third month, has thus exposed the ugly reality underlying the current conflict. War is profitable. The political and economic elites on both sides of the front are busy making money from the contraband of goods and services. One scheme, unearthed last year by Ukrainska Pravda, shows how government officials bought coal that was purportedly from South Africa, through a Hong Kong company, that was in fact Donbass coal shipped through Russia.

This scheme is not unlike the one Ukrainian government officials are currently using to claim that the country no longer purchases gas from Russia. Nowadays, Slovakia is asked to request additional supplies. Russian gas is then shipped through Ukraine to Slovakia and, after traveling a few hundred meters, reversed from there back into Ukraine. The higher price for this “Slovakian gas” is partially funded by loans from Western banks guaranteed by the World Bank. Everybody wins, except the Ukrainian consumer.

In the current crisis, however the same actors stand to lose money by having their schemes disrupted. The question is why the government—which has tens of thousands of military and paramilitary forces in the area—doesn’t simply remove this small handful of activists, who then calmly go about their business, and even vow to expand the blockade to all railroad traffic between Russia and Ukraine.

Analysts offer a variety of reasons for the government’s failure to act, including Kiev’s concern about bad publicity, the blockade’s popularity with the public, fear of civil conflict near the front lines, or even the risk of a wider attempt to remove the government by force—something far-right groups like Right Sector and Azov have previously threatened.

Whatever the actual reason, though, the current crisis shows how easy it is for a miniscule number of committed radicals to hold the entire nation hostage. While many analysts in Kiev now predict early parliamentary elections, such elections will not address the fundamental issue the blockade has revealed: the government’s inability or unwillingness to enforce state authority against unsanctioned vigilantism. Whether cutting ties with the occupied territories makes sense or not, the issue should be decided in the councils of government rather than by armed vigilantes.

There is no simple solution to this existential problem. To resolve it, the government must demonstrate it possesses the political will to impose respect for the rule of law. No amount of foreign assistance, political support, or even military aid can provide it with that will. Without it, however, there can be little hope for a united and prosperous Ukraine.

Nicolai Petro is Silvia-Chandley Professor of Peace and Nonviolence at the University of Rhode Island. He was a Fulbright Scholar in Ukraine from 2013–14, and is the editor of the forthcoming book Ukraine in Crisis (Routledge, 2017). Josh Cohen is a former USAID project officer involved in managing economic reform projects in the former Soviet Union. He contributes to a number of foreign-policy-focused media outlets.