The Black Sea: How Russia Is Looking to Cause Chaos for NATO 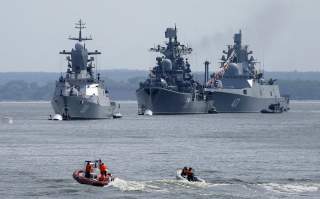 At the end of her long mission, the EP-3 “Aries” naval surveillance aircraft slowly entered a southbound turn to return home. Suddenly the operator chatter in the cabin increased noticeably and the flight deck was informed of a fast moving contact approaching them from the northeast. An imperceptible groan went around: another “routine” Russian interception was bound to delay their return. Sure enough, the tiny speck speeding in from the north soon took on the familiar shape of a Sukhoi SU-27SM interceptor, probably from Belbek air base near Sevastopol. As the light blue Sukhoi curved gracefully in an arc over the EP-3 to gain a position astern, the Aries captain wondered how aggressive its pilot would be. Things had become increasingly tense since a number of near misses had made national news back home. As he ordered the inevitable checks to be made on the plane’s navigational systems, he didn’t have long to wait to find out. With a burst of afterburner the Sukhoi came up the port side of the larger Aries and quickly flipped across the nose before leveling out and speeding off ahead. The intense turbulence caused by the jets shook the older propliner, causing dust to fall from the air conditioner vents and overheads. “Damn fool,” the captain grunted as he grabbed the yoke firmly, gunned the throttles, and cranked the Aries into a forty-five degree bank. The sound of cheers and laughing reached him from the operators cabin behind. “Easy for them,” he thought. “Their necks aren’t on the line!”

Not to be cheated, however, the nimble Sukhoi was soon astern again, intent on repeating the warning maneuver. Whether he simply misjudged his approach or else was intentionally trying to get even closer, it was obvious to both pilots in a flash that the Russian was going to be perilously close. With a staccato series of impacts, the Russian fighter’s belly scraped the tips of the inboard prop before, with a sickening thud, the long tailcone hit the roof of the cockpit. Instantaneously the flight deck was filled with condensation and the howl of escaping air caused by the rapid decompression. Alarms sounded everywhere and the pervading smell of shorting electrics filled the cabin. Both Aries pilots were temporarily blinded, but they swiftly leveled the falling plane as instinct took over. With their blades out of balance, the port engines were vibrating wildly and the flight engineer had no choice but to shut them down. As the old airliner spiraled downwards, it was clear that they were in a mess. Beyond the failing engines, the pressure cabin was clearly compromised in various places, the windscreens were glazed over, smoke had begun to fill the flight deck and the onboard power systems were failing. Absent a miracle, the best they could hope for was enough control to execute a controlled ditching. Firing out a series of warnings to the crew, the flight deck struggled to level the craft just in time to flop into the cold Black Sea waters, which had rushed up hungrily to meet them.

The plight of the Aries had not escaped attention from below. The watchkeepers on the bridge of the DDG USS Carney, could scarcely believe their eyes as the four-engined aircraft emerged from the low cloud base trailing smoke and promptly pancaked into the rough seas—not even five miles away. Unfortunately, the Grisha III Corvette from the 181st anti-submarine ship division they were shadowing, was even closer. Both vessels responded immediately, increasing speed and turning towards the aircraft. Beyond the immediate lifesaving issues, the Captain of the DDG was under no illusions as to the value of the wreck and the tenuous and difficult situation that they faced. It was clear that the Russians would arrive first, but where exactly was the position of the ditched plane? They were close to the territorial limit, he knew that, but how close? As he unlocked and pressed the klaxon for General Quarters, all sorts of questions swirled in his mind as to how far he could go and what to tell his crew.

Sounds far fetched? Something from a novel? Maybe—but with an increasingly bullish Russian response to the presence of western navies in the Black Sea in recent months, incidents and accidents like these cannot be ruled out. They also illustrate a simple fact: that sometimes a country is prepared to use risky tactics and even deadly force, thereby risking a potentially unlimited and uncontrollable escalation of violence in defense or pursuit of its national interests. So, just what are those interests in the case of Russia and the Black Sea? Having already considered Russian interests at the strategic level, this article takes that question a step further; looking at an important region where our interests may clash, to try to anticipate the likely behavior in each case.

The Black Sea region is vitally important to Russia, sitting as it does at a nexus between her geopolitical, economic and cultural interests. From a geopolitical standpoint, the sea itself sits right in the middle of what Russia currently sees as a necessary security or “buffer” zone that stretches from Azerbaijan in the East, across the Caucasus and Georgia, over the waters of the Black Sea, and into Ukraine and Moldova to the West. In an ideal world, this security zone would be filled with countries that are broadly sympathetic to Moscow’s world view. In some cases, Moscow has so much influence over the policies of certain countries that they are essentially “client” states, just as they were in the old Soviet days. Armenia would perhaps be the closest example. The Maritime Doctrine of the Russian Federation makes it clear that “an accelerated modernization (of the Black Sea Fleet) and comprehensive reinforcement of the strategic positions (security belt) of the Russian Federation” remain the goals in this region.

Of course the concern with these “client states” is that, since they cannot exist independent of their stronger patron, should they ever decide to part, they effectively have to become a part of another strong competitor’s satellites. This is one of the reasons why Moscow fears NATO’s encroachment into its near abroad, and why, after the loss of Romania and Bulgaria in 2004, it took such a strong stance against the announcement at the Bucharest Summit in 2008 that both Georgia and Ukraine will at some point become members of NATO. To combat these “break-aways,” Russia has developed a combination of military pressure and aggressive political interference on the ground, using all means, including cyber, to destabilize any political entity within these states that Russia deems to be a threat to its erstwhile control. Its ongoing actions in Transnistria region of Moldova and the Donbas region of Ukraine are typical in this regard.

Allied with this, Russia fears that these neighboring countries can also serve as a convenient entry point for hostile powers attempting to shape Russia’s information space. The theory goes that hostile intelligence services in her near abroad are seeking to destroy Russia’s unity and territorial integrity by bombarding her citizens with western propaganda. From this perspective, any radical political changes threatened in her near abroad must be thwarted at all costs, even if this leads to conflict. Although appearing hostile to other international powers, it is important to appreciate that Russia views such actions as being purely defensive in nature. Georgia (2008) and the Crimea/Eastern Ukraine (2014) are both examples of this. It is also worth noting that the aim of these interventions is invariably to gain leverage over the ruling power without necessarily overthrowing the regime. For example, the war against Georgia in August 2008 gave Russia a firm foothold in the breakaway quasi-states of South Ossetia and Abkhazia, placing Russia’s Iskander short-range ballistic missiles within striking distance of Georgia’s vital economic centers. Similarly, in Moldova, Russia’s ongoing political influence is, to a large extent, explained by the heavy military presence in the separatist region of Transnistria.

Finally on the geopolitical side, Russia sees it as vital to keep pressure on the coastlines and activities of her nearest NATO member states; states like Turkey, which have immensely important choke points like the Bosporus and Dardanelles straits, as well as the oil-drilling activities of states like Bulgaria. Turkey is perhaps the biggest prize here and the S-400 agreement must be seen as a brazen attempt to sow discord within the NATO alliance, a strategy entirely in line with Russia’s overall goal of breaking Western institutions apart. Beyond the unconventional, “hybrid” techniques, her Black Sea fleet operating out of the former Ukrainian-Russian naval base of Sevastopol, plays an important role here, as it does for the more distant power projection mission into the Eastern Mediterranean and Middle East.

In fact, the Black Sea fleet and its associated Caspian Sea Flotilla, almost alone among major naval formations, has attracted a steady and consistent investment over the last decade. As a result, it has undergone some remarkable changes since 2010, all aimed at improving the reliability and reach of its multirole platforms, but in particular, its ability to conduct cruise missile attacks within the Caucasus region and the broader Middle East. Key capabilities added have been the incorporation of all the Buyan-M class small missile ships (corvettes) of the Project 21631 and the Admiral Grigorovich class frigates (Project 11356M). While modest in size and tonnage, these units pack a considerable punch with their Kalibr cruise missile capability. In the past four years, the Black sea fleet has also received six new submarines of the Improved Kilo class (Russian designation Varshavyanka), a sure sign of their quest for improved survivability in the face of the expected NATO dominance at sea.