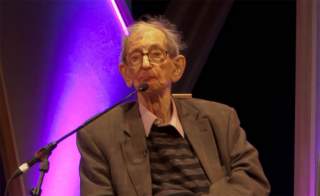 IN A FAMOUS exchange in 1994, Michael Ignatieff asked Eric Hobsbawm whether the vast human costs inflicted by Stalin on the Soviet Union could possibly be justified. Hobsbawm replied, “Probably not. . . . because it turns out that the Soviet Union was not the beginning of the world revolution. Had it been, I’m not sure.” Do you mean, Ignatieff pressed him, that “had the radiant tomorrow actually been created, the loss of fifteen, twenty million people might have been justified?” Hobsbawm answered, “Yes.”

Two years after Hobsbawm’s death at the age of ninety-five, his lifelong, unapologetic Communism remains for many the most important thing about him. To his critics on the right, it discredits him, pure and simple. On the left, even some commentators who took more admirable stances on Communist tyrannies treat his steadfast commitment to the USSR as, to quote Perry Anderson, “evidence of an exceptional integrity and strength of character.” They refer with something approaching reverence to the justification he formulated in his 2002 autobiography, Interesting Times: “Emotionally, as one converted as a teenager in the Berlin of 1932, I belonged to the generation tied by an almost unbreakable umbilical cord to hope of the world revolution, and of its original home, the October Revolution.”

But in what ways did Hobsbawm’s politics really shape the voluminous writings that made him one of the most famous historians of the past century? Certainly, the dynamic and destructive energies of capitalism constitute the central theme of his most famous work: the grand quartet of general histories that proceed from The Age of Revolution, 1789–1848 to The Age of Extremes, 1914–1991. Without whitewashing Stalin’s crimes, the last of these nonetheless argued that the Soviet example led directly to the West’s adoption of Keynesian economics and the welfare state. Yet the books offered anything but a rigidly Marxist interpretation, and generally eschewed sharply polemical language. It is doubtful that a true Stalinist ideologue could have been saluted at his death (admittedly, by the Guardian) as “arguably Britain’s most respected historian of any kind,” or received the title of “Companion of Honour” from Queen Elizabeth II in 1998. Niall Ferguson (hardly an ideological soulmate) called him a “truly great historian.” Among the members of the left-wing student group called the Cambridge Apostles, it was Kim Philby, not Eric Hobsbawm, who actually went to work for Stalin, and lived out his final decades in lonely, crapulous Moscow exile.

Hobsbawm’s posthumous book of essays, Fractured Times, gives considerable insight into the factors other than Communist politics that shaped his outlook—and that shaped it more strongly. Like most such collections it is something of a mixed bag, with forgettable book reviews and superficial lectures jostling for space with several trenchant and beautifully written essays. At first glance it also seems to be detached from the main themes of Hobsbawm’s historical work—namely, capitalism, revolution, war and the “primitive rebels” against the social order whom he examined in his 1959 book of that title (the book that first brought him real fame). Fractured Times deals mostly with high culture in the twentieth century, in an unapologetically elitist tone. But it is precisely this subject matter and this tone that reveal something often overlooked about Eric Hobsbawm. For all his commitment to international Communism, he was also profoundly, if paradoxically, bourgeois, and in a distinctly Jewish way.

HOBSBAWM’S UPBRINGING was certainly that of a bourgeois Jew. His father came from a Jewish trade background in the East End of London; his mother was the daughter of a Jewish Viennese jeweler. Born in Alexandria in 1917, Eric spent his childhood in Vienna and then, from 1931, after the death of his parents, with an aunt and uncle in Berlin. Although English was the language of his homes, his larger middle-class milieu was characterized by a deep reverence for German high culture: Goethe and Schiller, Mozart and Beethoven. In Berlin, amid the misery of the Depression and the turmoil accompanying the collapse of the Weimar Republic, the teenage Hobsbawm was swept into street politics. He later compared the intense experience of “participation in a mass demonstration at a time of great public exaltation” to sex. But after Hitler’s seizure of power the family relocated to London, where Hobsbawm finished his secondary education at that most middle-class of British institutions, the grammar school, and spent his spare hours reading Romantic poetry and listening to jazz, along with selling Communist Party pamphlets. From there, it was off to Cambridge, and his exceptionally long and productive intellectual career.

Politics, in fact, shaped this career less than many of Hobsbawm’s obituaries suggested. His membership in the British Communist Party and on the editorial board of the party’s main organ Marxism Today may have kept him from a glittering Cambridge professorship, and made travel to the United States difficult, but his position at Birkbeck College, University of London hardly amounted to Siberian exile. Nor did he do much of the actual street-level work—leafleting, picketing, organizing—of ordinary Communist militants (he famously chastised fellow left-wing historian and peace activist E. P. Thompson for neglecting historical scholarship in favor of political organizing). Like most intellectuals who had come of age in the thirties, Hobsbawm also had trouble taking the political and cultural upheavals of the sixties seriously. Rather than making common cause with the British New Left, he talked about the impending death of socialism and supported the New Labour movement eventually headed by Tony Blair. He proudly boasted that he had never worn blue jeans, and once attributed the success of rock and roll to “infantilism.” His own musical passion remained jazz, which for many years he reviewed with great flair, under the pseudonym Francis Newton, for the New Statesman.

The essays in Fractured Times that deal with Hobsbawm’s formative bourgeois Jewish milieu do so not just with insight, but also with respect. They take as a starting point the intense identification that middle-class European Jews of the late nineteenth century felt with their countries’ high cultures: French, Russian, Hungarian and especially German. Throughout Central Europe, Jews seeking emancipation from the “self-segregation” of the shtetl (it was not, of course, entirely the Jews’ own choice) found in German culture a path toward professional and social distinction. Embracing it, Hobsbawm notes, also proved the most effective way of separating themselves, in their own eyes as well as those of their gentile neighbors, from the uneducated, religious, Yiddish-speaking Jewish masses to the east. Hobsbawm also makes, quite keenly, another point: “The passion of emancipated Jews for the national languages and cultures of their gentile countries was all the more intense, because in so many cases they were not joining, as it were, long-established clubs but clubs of which they could see themselves almost as founder members.” What we now see as German high culture, at least in philosophy, literature and the visual arts (Kant, Goethe, etc.), took shape in the late eighteenth and early nineteenth centuries, just as German Jews were first gaining civil rights and prominent positions in gentile society. In the great multilingual stew of Austria-Hungary, the Jewish passion for everything German was unrivaled (although in Hungary itself, some Jews did prefer the local vernacular). Hobsbawm offers as an example (twice!) the heavily Jewish town of Brody, in Galicia, once Austro-Hungarian, and subsequently Polish, Soviet and Ukrainian. In the nineteenth century, its principal languages were Yiddish and Ukrainian, but the Jewish town fathers nonetheless insisted that its schools adopt German as their language of instruction.

In these essays, Hobsbawm dwells on past Jewish achievements with something approaching ethnic pride. He enumerates Jewish Nobel Prize winners, and gives long lists of Jews who dominated their respective fields (“Heine, Mendelssohn Bartholdy, Ricardo, Marx, Disraeli. . . . Modigliani, Pascin, Marcoussis, Chagall, Soutine, Epstein, Lipchitz, Lissitzky, Zadkine”). He speaks of the “enormous oilfield of [Jewish] talent . . . waiting to be tapped by the most admirable of all human movements, the Enlightenment.” And this refugee from Hitler says of German culture: “Only those who have experienced the force, the grandeur and the beauty of that culture, which made the Bulgarian Jew Elias Canetti write in the middle of the Second World War that ‘the language of my intellect will remain German,’ can fully realise what its loss meant.” It is no wonder that Hobsbawm was a devotee of Joseph Roth, the Jewish novelist who composed that piercing elegy for the German-speaking Habsburg Empire, Radetzky March.

Hobsbawm also perceptively notes that in many cases, Jews did not simply embrace high culture, but also ended up giving it a distinctly Jewish flavor. In Vienna, where the Jewish population soared from less than four thousand in 1848 to 175,000 in 1914, Jews played an outsized role in shaping middle-class institutions, artistic genres and forms of humor (the same, it might be noted, was true of Budapest and, later, New York). By the twentieth century, Jewish writers and artists were weaving more and more recognizably Jewish themes into their work. Hobsbawm muses that when it comes to Jewish cultural creativity, “a certain degree of uneasiness in the relationship between them and non-Jews has proved historically useful,” pointing out that the end of the nineteenth century—the years of the Dreyfus Affair in France and the anti-Semitic Mayor Kurt Lueger in Vienna—was in fact a time of “maximum stimulus for Jewish talent.”