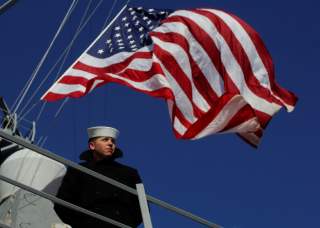 If there is a distinct American conservative political tradition, which there certainly is, there is also modern foreign policy tradition that grows from it. Far from anything resembling the policies of American-first Republicans of the 1930s—and since then allied to the Republican party only though circumstance of history—it is characterized by commitment to peace through strength, the primacy of national sovereignty and support for liberty under law.

This age-old adage was used to best effect by President Ronald Reagan to give context to America’s military modernization in the 1980s. In today’s world, armed force remains the final arbiter of American interests. For this reason, it provides indispensable context for American diplomacy. When security issues are discussed in Asia, or Europe, or the Middle East, the United States has a seat at the table, because as a last resort, it has the capability to impose our will, and failing that, impose costs on our enemies.

This is not as Hobbesian as it sounds—for two reasons.

One, the use of American military power is mitigated by the U.S. Constitution. The president’s powers as commander-in-chief are not the sole factor in determining the use of that power. Congress funds the military. It has oversight, legislative power over the military bureaucracy and confirmation powers. It ratifies security treaties. And it has the power to declare war.

How Congress exercises its powers in relationship to the president ebbs and flows over time. Generally, during times of grave, imminent threat, Congress errs on the side of deference; in more peaceful times, it asserts itself. The relationship also varies according to the confidence Congress has in the president’s leadership.

This is sometimes overlaid with partisanship—as was the case in the debates over the Vietnam War—but not always. It was a Democratic Congress that rallied opposition to President Carter’s attempt to pull American ground forces out of Korea. And in 1993, a Democratic Congress was instrumental in pressuring President Clinton to withdraw from Somalia.

Congress rarely formally declares war. And there are debates over what sort of authorization a president requires from Congress to wage war, and when. But Congress is always a factor in a president’s decision. Through Congress’s involvement in his decision, the values of the American people come to bear. Their values—and the values of the servicemen from whose ranks they are drawn—dictate an unwritten, imperfect sort of “just war.” A war that violates the values of the American people will ultimately lose support of the people’s representatives in Congress, and Congress will, in turn, impose this perspective on the president.

The second mitigating force on the American use of force is interaction with allies, themselves mostly democratic republics. The global presence that the United States requires to tend to its interests requires allies. And the most effective use of force requires their acquiescence, if not support.

Opposition to a war in the Western Pacific from Japan, host of the U.S. Seventh Fleet, would be a potentially debilitating obstacle. A major use of force in the Middle East would require the use of American bases in Europe. And of course, a war in Europe itself would call for consultations with our NATO allies. The more encompassing the war effort, the greater the need for allied support, but even the case for a very limited war is strengthened by the expressed support of our allies.

The most distinguishing feature of conservative thinking on the use of force may be its trust in the American institutions of government to deploy it properly and prudently. Trust of American power is derived from faith in constitutional government. That trust, and not the approval of international bodies such as the United Nations, is the ultimate determinate of whether the use of American power is legitimate or not. A UN resolution may be useful, and support of allies practically necessary, but for American conservatives, the support of the American people is sufficient to justify its use of force.

America has demonstrated repeatedly, especially over the course of two world wars and their aftermath, that it can be trusted with singular power as a global leader. Allies and friends seek the protection of American power. They don’t fear it. The only ones who fear it are illiberal regimes that that threaten their neighbors and the global order of peace and security.

The Primacy of National Sovereignty

Conservatives put a premium on state sovereignty in the international system. This, in turn, makes an American statesman’s first order of business protecting and promoting the national interest. Such a system also has the best prospect for allowing all states to do so peacefully. Global institutions such as the United Nations tend not only to advance domestic policies that often are odds with democratic self-governance and the rule of law. They also often one-sidedly use their influence to undermine the singular and exceptional role America has to play in the world as a leader.

The conservative interest in sovereignty does not mean going it alone or isolationism. The historic lessons of isolationism were painfully learned at the outbreak of World War II, and they should never be forgotten. Peaceful, diplomatic interaction among sovereign states promotes cooperation on common national interests. Bilateral diplomacy in Asia created the network of American security alliances that has underwritten the peace of the region. Diplomacy with our former wartime allies did the same in Europe with NATO. And U.S. diplomacy elsewhere in the world, from Latin America to Africa to the Middle East, has helped preserve the freedom and security of countless millions more. Historically, there have been no stronger supporters of American collective defense commitments than conservatives.

Beyond bilateral diplomacy, sovereign states can agree severally to abide by common rules in how they conduct themselves internationally. It is the interest of the United States to shape these rules. U.S. representatives should attend the UNGA, the G-7, G-20, APEC, ASEAN meetings and others to this end. These interactions can be very complicated. Coalitions of countries often operate at cross-purposes from the United States. But the fact that they’re difficult is no reason for the United States to stay away. The world is messy, and conservatives expect nothing less.

However rules are created, as long as the United States has determined them to be in its national interests, it should make a sovereign decision to abide by them. The United States has done this to exemplary effect when it comes to the law of the seas. The United States observes these rules because they are virtually universally accepted—if not adhered to—and because they serve America’s historic interest in freedom of the seas. It need not sign a convention, and subject itself to provisions that compromise its sovereignty, to do so.

Conservatives believe in individual freedom, and the natural law from which it derives. They believe in a rule of law that is democratically established and constitutionally limited. The rule of law is both an organizing principle of society and the moral basis of America’s political traditions, and as such, changes only slowly and prudently. Conservatives care deeply also about freedom of religion, speech and press, and the right to property. They believe that republican forms of government are the best guarantors of these rights. For these reasons, conservatives cannot but view the legitimacy of states in the international system on their adherence to the same values.

Any movement rooted in the works of Edmund Burke’s Reflections on the Revolution in France, however, is bound to be suspicious of social upheaval. An instinctual fear of the mob and respect for the lessons of history are reminders to conservatives about how poorly they can turn. Liberty may grow out of spasms of violence and overthrow. But more often, it does not.

Unlike the French Revolution, which was violent social revolution, the American Revolution was a political movement to establish an independent civil government to guarantee rights denied by a faraway and increasingly foreign power. History has shown time and time again what happens when radical social movements, whether from the right or left, take over a revolutionary cause. The end result of Cuba’s 1959 overthrow of existing order, for instance, resulted not in freedom but oppression. In fact, “revolution” during the Cold War often meant greater oppression (think Maoism in China and Cambodia). In the current era, skepticism concerning revolution has been borne out in places like Egypt and Libya. Today, chaos—not communism—is the chief threat that lies on the other side of revolution. In the Middle East, authoritarian Islamism is another.

Most Americans are instinctively believers in the “democratic peace theory”—the idea that as liberal values spread, the likelihood of war decreases. Conservatives are no exception. Where they differ with some of their countrymen is that they know human nature precludes ideal outcomes. This is why they are skeptical of international organizations. Conservatives know that attempts to achieve perpetual peace through organizations such as the United Nations are subject to corruption, to the detriment of American sovereignty, interests and even the ideals they purport to advance.

Conservative commitment to human liberty extends to economics. They are philosophical descendants of Adam Smith, Friedrich Hayek and Milton Friedman; they believe that the “invisible hand of the market” is a far superior instrument for allocating resources among individuals than governments. This applies to commerce between people across national borders, as well as within them. Ideally, this would involve sovereign governments unilaterally discovering the magic of free markets. Those that do would reap benefits for their peoples; those who do not would suffer the consequences.

Disinclined to believe in utopia, however, conservatives know this will be a rarity. As firm believers in the sovereignty of the nation-state as the fundamental building block of international order, they also know that such decisions, in reality, are mediated by national governments with varieties of national and regime interests.

The most practical way to expand free markets and maximize comparative advantage in the international economy is for the U.S. government to engage other governments in the pursuit of market reform. The nature of economic agreements reached between governments cannot but be imperfect. What distinguishes the conservative approach is its commitment to the freest trade possible. It seeks mutual commitment to freeing markets—including its own—not reciprocal protection of industries, or commerce choking regulation in areas such as labor and environment. Free-trade agreements should not be about governments trying to managing international commerce.

Neither does conservatism treat economics as an instrument of national power. This naturally leads to industrial policy and mercantilism. Government has no responsibility for where, in what sectors and under what terms companies invest, either at home or abroad. American companies are materially responsible only to their owners, shareholders and investors. Free trade is good, not because it creates jobs for exporters, but because it creates the greatest good for the greatest number. Exports are no better than imports; inward investment no better than outward.

Conservatism is a political philosophy with as much application to foreign policy as domestic policy because it derives from the same impulses, belief in the imperfectability of man, in transcendent and temporal order, in liberty, and in tradition. It is as relevant to international relations today as it was when Edmund Burke made his commentaries on the French Revolution and Adam Smith penned The Wealth of Nations. Statesmen would do well to rediscover its roots and recommit America to conservatively defined global leadership.