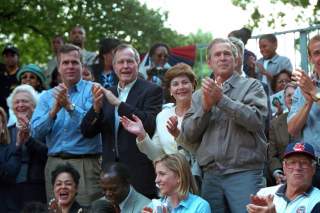 THE BUSH family is quite possibly the ideal political dynasty for an angrily populist age. The one aristocratic trait the Bushes sometimes exhibit, a kind of all-purpose cluelessness, contrasts pleasingly with the Snopes-like single-mindedness of so many twenty-first-century politicians: the Clintons (with their air of arriviste entitlement), the Pauls (père and fils burning alike with libertarian passions), Chris Christie (blustering self-aggrandizement). We got a fresh taste of the peculiar Bush antimagic last December, when Jeb Bush announced he will “actively explore the possibility” of running for president in 2016, gingerly picking up the torch his father and older brother each fumblingly cradled all the way to the Oval Office. Though bland and bromidic, Jeb’s statement worried conservatives. Rush Limbaugh warned of a fresh assault by the GOP “donor class” on salt-of-the-earth, “hayseed, hick pro-lifers,” while the policy analyst Henry Olsen cautioned in National Review that “a business-oriented Republican who seems to value bosses over workers” would antagonize the GOP base. They had a point. The Bushes do indeed have deep ancestral roots on Wall Street, which ceased to be a site of social conservatism sometime during the reign of the Baptist teetotaler John D. Rockefeller, “a money grubber plus a theologian,” as H. L. Mencken once described him. But Bush-style conservatism isn’t only about upholding the plutocracy. It’s about money as a lubricator of “free enterprise” in the varied forms Bushes themselves have pursued through the generations: banking, oil, real estate, baseball team owning. As this history has enriched the family, it has also broadened its political reach. Among the current field of presidential aspirants only Jeb Bush has enduring ties to campaign pros in Texas and Florida—both electoral gold mines, both part of the giant Bush domain—and at the same time can count on family friends to organize a fund-raiser in Greenwich, Connecticut.

If the Bushes seem unruffled by Tea Party opposition, perhaps it is because they have been fending off charges of elitism for many years. “They say I’m a patrician,” the elder George Bush told voters in the Iowa caucus in 1980. “I don’t even know what the word means. I’ll have to look it up.” (This from a Phi Beta Kappa Yale graduate who completed his studies in two and a half years.) A generation later, George W. Bush, a more natural campaigner, turned two presidential contests, the first against Al Gore, the second against John Kerry—both prep-school and Ivy League products like himself—into an Animal House fracas, with Bush cast as the togaed partier John Belushi and his opponents as the buttoned-down prigs.

Much of this involved pandering, of course. But pandering is an essential discipline of presidential campaigning, with its hazings and abasements to which the upper classes seemed uniquely suited, reared as they are in “the code of the athlete, of the tough boy . . . that curious mixture of striving, asceticism, and rigor,” as Saul Bellow wrote (in his novel Dangling Man) in 1944—a year after the eighteen-year-old George H. W. Bush had become the navy’s youngest pilot.

But programmatic ordinariness exacts a cost. The “first” families of an earlier time cultivated an air of superiority: the Adamses, with their intellectual and literary gifts; the Roosevelts, with their ebullient noblesse; the Kennedys, with their tragic glamour and conquest of diverse milieus, from Boston to Hollywood. The Bushes make no such appeal to the imagination. It is not easy to picture the Ken Burns miniseries about them, unless it emphasized the wives—the sharp-tongued Barbara, the dreamily sensitive Laura. At age ninety, Bush 41 seems less the honored statesman than an amiable great-grandfather. And he bears the stigma still of repudiation, one of only two presidents elected since 1968 (the other was Jimmy Carter) who was denied a second term; the incumbent Bush got a smaller percentage of the vote in 1992 than Herbert Hoover did in 1932. George W. Bush slipped through to a second term, but he needed help from Supreme Court conservatives to get there in 2000; Gore received roughly 540,000 votes more than he did. And he returned to private life trailing more bad feeling than any departing president since Richard Nixon.

GEORGE W. Bush’s post-presidency has been attractively old-fashioned. He has withdrawn from the public stage in the way statesmen did a century ago. Critics find his paintings interesting. And his new memoir, 41: A Portrait of My Father, with its repeated references to “public service” and its muffling of ideological fervor, has an almost courtly traditionalism. Its central theme is the parallels that unite the two Bush presidencies, especially on the topic of war. Time and again, Bush 43 quotes examples of his father’s anguish at sending troops into battle, though that anguish is oddly self-referential. “I’m thinking about the kids, those young 19 year olds who will be dropped in tonight,” Bush Sr. wrote just before he decided to invade Panama in December 1989. The action involved some twenty thousand troops, making it, as the son notes, “the largest deployment since the Vietnam War.” It was also, he says, a “secret mission”—meaning his father did not consult Congress, the United Nations or the Organization of American States before deciding to act. At the time there was little protest, because the body count was tolerable: twenty-three Americans killed, three hundred wounded. “On New Year’s Eve, Mother and Dad visited a military hospital in San Antonio, where some of the wounded from Panama had been sent for treatment,” the younger Bush writes.

But Bush 43, like his father, remains silent about Panamanian casualties, whose number remains unknown. Intense fighting, followed by major fires, had occurred in the poor, densely populated slum around Manuel Noriega’s headquarters. In a story published just after the war, the New York Times reported that Red Cross workers had been “struggling for days to correlate names of missing civilians with bodies.” The Bushes leave this part of the story unsaid. The schoolboy code, as Bellow pointed out, “does admit of a limited kind of candor, a closemouthed straightforwardness. But on the truest candor, it has an inhibitory effect.”

The ousting of Noriega, in any case, was only the rehearsal for a strike against a bigger despot, Saddam Hussein, another former asset initially built up as a useful strongman (in this case as a check against Iran) until his ambitions in the region collided with ours. January 2015 marked the twenty-fourth year since Apache air strikes opened the war, which initiated the Bush family’s most enduring legacy, its father-and-son belligerency in the Persian Gulf. This episode too provided an occasion for limited candor. In a letter to his children, before Operation Desert Storm, Bush 41 wrote, “I guess what I want you to know as a father is this: Every human life is precious. When the question is asked ‘How many lives are you willing to sacrifice’—it tears at my heart. The answer of course, is none—none at all.”

The Iraqi death count also remains unknown, though one diligent researcher, the social scientist Beth Osborne Daponte, puts the total at more than 150,000, including those massacred in Shia and Kurdish uprisings, which, in the aftermath of Saddam’s defeat, were encouraged by Bush’s war team. Part II of the invasion, ordered by Bush 43 in 2003, would cause four hundred thousand or more Iraqi “excess deaths”—including pregnant women who couldn’t get to hospitals and civilians who drank contaminated water amid the brutal insurgencies. At the peak level of violence, before the daring and well-executed surge, an average of 1,629 Iraqi civilians were killed each month, as James Mann notes in George W. Bush, his concise new biography, an entry in the American Presidents book series. Mann, who has written impressively on Bush’s foreign policy, briskly reviews the Iraq disaster, “a strategic blunder of epic proportions, among the most serious in modern American history.” The failure is all the more dismaying for coming after sixteen months “of planning and preparation,” as Mann reminds us.

The trouble was “a series of faulty assumptions” that Bush’s war cabinet aggressively promulgated. One was that regime change in Iraq would bring stability to the region; another, that Iraq had a direct connection to the 9/11 attacks. Bush administration hawks ignored all warnings that the Iraq invasion would inflame an already-volatile region, summoning forth fresh waves of jihadists. The martial dogma they embraced struck many as new. In fact, it was an offshoot of the rollback or “liberationist” doctrine espoused by militant anti-Communists in the 1950s and 1960s. At the time, this approach was rejected as irresponsible by Democratic and Republican presidents alike. But it flourished on the right. Its first major political spokesman was Barry Goldwater. “In addition to keeping the free world free, we must try to make the Communist world free,” he declared in The Conscience of a Conservative. “To these ends, we must always try to engage the enemy at times and places, and with weapons, of our own choosing.” This crusading foreign policy was later taken up by neoconservatives in Bush 43’s administration and at outposts like the Defense Policy Board and the Weekly Standard. Together, they created the Bush Doctrine, which was Goldwaterism revived. “Deterrence, the promise of massive retaliation against nations, means nothing against shadowy terrorist networks with no nation or citizens to defend,” George W. Bush said at West Point in June 2002. “Containment is not possible when unbalanced dictators with weapons of mass destruction can deliver those weapons on missiles or secretly provide them to terrorist allies. . . . We must take the battle to the enemy, disrupt his plans and confront the worst threats before they emerge.”