The Case for Congagement with China 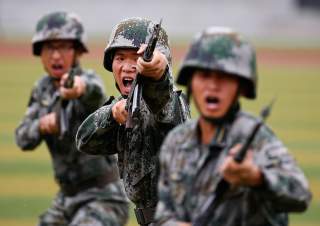 It is imperative to assess China’s current and planned capabilities, its objectives and strategy. Unlike in its recent history, China is now a rising global power. Its economy is the second largest in the world, directly behind America’s. The United States supported China’s rapid industrialization after President Richard Nixon’s opening. Later, it took advantage of the U.S.-backed liberal international order, including the global trading system, to export goods in enormous volume to markets around the world. China has also committed economic espionage against America, using cyber and other tools to steal intellectual property. Additionally, China is using regulations to compel U.S. firms to share their core technologies as a condition for gaining access to Chinese customers, even as relatively unfettered access to American markets continues to fuel Chinese growth.

China’s economic growth has brought hundreds of millions of its citizens out of poverty, but not without negative consequences: among them the long-standing one-child requirement, large-scale environmental pollution, and the growing gap between the very rich and everyone else.

China holds more than a trillion dollars in U.S. debt, and has become America’s largest trading partner. In 2015, U.S. trade with China totaled $659.4 billion—with the American trade deficit standing at $336.2 billion. Access to the American market has been vital for China’s spectacular growth and remains vital for its future.

China has leveraged its economic power to build up its military capabilities, including space and counter-space; information and electronic warfare; nuclear submarines and other systems needed to sustain a robust second-strike capability; aircraft carriers; amphibious ships; destroyers; transport aircraft and a number of different missile systems. It has the resources to further expand these capabilities and acquire new ones.

As China’s power has grown, it has developed a huge ambition: to return China to greatness and to replace the United States as the world’s dominant power. Beijing sees the domination of Asia as a necessary step to achieve its ultimate projection of global predominance. In the immediate future, China seeks to preclude any U.S. military intervention along its maritime periphery. Operationally, Beijing’s aim is to exclude others up to the “first island chain,” and seeks to project power all the way to the “second island chain.”

The two-island concept has both defensive and offensive dimensions. Defensively, China considers the island chains important for avoiding hostile encirclement. Offensively, they could enable an invasion of Taiwan. Beyond Taiwan and self-defense, China seeks not only to deter and defeat hostile intervention in the area, but also to minimize the U.S. regional role, and to gain dominance over Asia—first Southeast Asia and, over time, Central Asia.

China’s regional strategy has a military and economic prong. Clearly, China aims to acquire the capability to use decisive force to defeat threats to its interests and resolve territorial disputes quickly, while precluding timely U.S. intervention. According to Rodrigo Duterte, Xi Jinping threatened war over disputed areas in the South China Sea.

The second prong is economic. China wants to bring into its orbit a network of countries in Europe, Asia and Africa. The One Belt, One Road (OBOR) plan and the Asian Infrastructure Investment Bank are key instruments in the service of this objective. Greater economic interdependence with regional powers is meant to undermine U.S. alliances by creating incentives to not follow the American lead. Beijing also warns authoritarian Asian friends that ties to Washington make them vulnerable to U.S. interference in the name of democracy promotion and human rights. In contrast, China’s policy is not to interfere in their domestic affairs.

While China’s near-to-mid-term focus is on projecting power in Asia, its long-term ambitions go well beyond the region. China’s ultimate goal is global preeminence. Beijing is already establishing a permanent naval presence in the Indian Ocean. It is acquiring facilities in the Persian Gulf and in the Mediterranean, and exploring options for a naval presence in East and West Africa.

As it builds its military power, China wants to avoid the Soviet mistake of placing an unbearable burden on its economy due to excessive military spending. But as its economy’s size approaches that of the United States’, it likely will also want a comparable military capability and to become a true superpower, with the clout to shape the international order.

CHINA’S TRAJECTORY has important implications for the United States. As Graham T. Allison argues in his new book, Destined for War, when rising powers challenge dominant powers, the result is often war. A strong China likely will behave assertively, especially in its territorial ambitions, its claim on Taiwan and its demand for deference from neighboring countries.

Three factors will be particularly important in how Chinese foreign policy unfolds.

At the same time, Chinese leaders see the United States as a country in decline and unable to sustain its global preeminent role over time. This encourages Beijing to pursue its objectives patiently. (There have been exceptions to this patience, however. After the financial crisis a decade ago, perhaps believing that U.S. decline had accelerated, it pursued its regional goals more aggressively.)

Second is in internal instability. A healthy economy has helped China sustain stability, but there are multiple sources of potential instability. The perpetuation of the gap between economic and political progress could produce increased demands for political freedoms, and the government’s refusal to accommodate these demands could produce a dynamic leading to instability. There are also regional and ethnic sources of instability. A serious downturn in the economy could accelerate instability and even lead to conflict and fragmentation—especially if the downturn affected different regions or subsets of the population unequally.

No matter the cause, significant political instability would alter China’s economic viability and its foreign and national-security policies. Predicting the nature and extent of such an impact is, of course, difficult. The result could be a China that grows more slowly and is more inward looking, but also a China that is externally more aggressive. Such aggressiveness could function as a means of distracting an unruly populace from domestic illegitimacy.

Third are regional developments and Chinese responses. Many Asian countries are alarmed by the surge of Chinese power and Beijing’s push for hegemony under Xi Jinping. Some convey their concerns openly. But others, including some U.S. allies, exercise restraint because they do not want to jeopardize economic ties. Japan, Vietnam and India are among those expressing the most alarm. Moscow seems more ambivalent, opting to cooperate with China to avoid isolation in the face of its deteriorating relations with the West. Russia is also concerned, however, that the balance of power is shifting significantly in favor of Beijing. Indeed, the two countries are competitors in Central Asia.

Regional concerns about China’s aggressive policies can produce responses that ought to constrain Beijing. Already, neighboring powers are aligning with the United States to balance against China. It is not outside the realm of possibility that China could miscalculate and become involved in a protracted and costly regional conflict.

A STRATEGY review is one thing. Developing a long-term strategy that protects and enhances U.S. interests is another entirely. Like China watchers and strategists outside of government, those within the Trump administration may be divided. Some may believe in enhanced engagement—expanding economic and political consultations with China, with the aim of achieving a lasting partnership and mutual accommodation. Others may argue for a blend of prevention and containment.

While each of these approaches has merit, they both suffer from serious limitations. Engagement could secure Chinese cooperation on current issues of importance, such as North Korea and access to the Chinese markets for American goods and services. It banks on the belief that continued Chinese economic development, combined with U.S.-China cooperation on issues of mutual interest, has the potential to transform China into a more democratic nation. Advocates of engagement might argue that, with increased Chinese participation in the international system, Beijing could gradually come to the conclusion that the system and its norms serve its interests. Some recent statements by President Xi, such as in the 2017 meeting of the World Economic Forum and his May 2017 New Silk Road speech in support of globalization, can be interpreted as a positive indicator. Engagement advocates inside the Trump administration might argue that, by the time China becomes strong enough to challenge the international order, it could already have become coopted by it.

But relying on engagement alone is risky. Expanded U.S. engagement would further help China develop economically and, thus, militarily—enabling it to catch up and even surpass the United States sooner than would otherwise have been the case, and raising the risk of war.