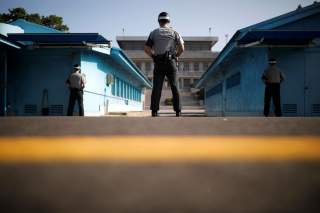 THE ABOVE example is just one of the most basic ways in which North Korea could respond asymmetrically. If we broaden our consideration of what a total war would look like, we find ourselves staring into the nuclear abyss.

Several years ago, I took part in a series of computer-based war games at a reputable think tank in Washington to examine what might happen if North Korea and America engaged in a nuclear conflict. Over the course of a few days, we simulated three scenarios to explore what a war with North Korea would look like, focusing on nuclear-weapons use, and conducting one full war per day in a fast-paced exercise.

The first of these exercises—a small nuclear war, if such a thing exists—imagined a conflict in coming decades, in which North Korea launches conventional weapons in a surprise attack on U.S. and allied forces on the Korean Peninsula, responding to reports that America is considering building up its military might in northeast Asia for a possible attack and regime-change operation.

Kim starts this Second Korean War with an artillery strike on Seoul while firing hundreds of small- and medium-range missiles on targets all over northeast Asia. U.S. and allied forces counterattack, focusing mostly on Kim’s weapons of mass destruction, wiping out what they think is all of them.

Allied forces then move their way up the Korean Peninsula. But Kim, even with his forces battered and bloody, hid four nuclear weapons deep underground. He makes the ultimate decision: to launch a nuclear strike on Seoul and Tokyo. While the allies go on to win the war, Kim’s nuclear attacks—with one warhead each making it past allied missile defenses, detonating in each city—result in over one million people dead and millions more wounded.

From here it gets even worse. As though the above wasn’t bad enough, we pressed forward into a second scenario that begins with North Korea starting a conflict using nuclear weapons in a sort of atomic Pearl Harbor. In this exercise, we assume that U.S. forces are building up in the Asia-Pacific in preparation for a possible regime-change invasion of the North, responding to a demand from the international community for Pyongyang to give up its nuclear weapons. Sound familiar?

But Kim Jong-un is no fool. He knows that once U.S. forces are in place, they will try to take out his weapons of mass destruction, first from the air and then moving across the thirty-eighth parallel. Kim takes a gamble, and decides that his only course of action is to strike first with his most powerful of weapons. Kim, in what thankfully was just a war game, launches nuclear attacks on Seoul, Pusan, Incheon, Tokyo, Sendai and Nagoya, with one nuclear weapon hitting each city. Over two million people perish in the atomic fire before Kim is defeated.

WHAT IS to be done? There are five potential pathways to mitigating the North Korea challenge. None involve a unilateral military strike; rather, they all embrace the idea that containing Pyongyang is our best and only option.

First, the Trump administration needs to be honest with itself and the problem it faces. There is no room for thinking we have more time to “stop” North Korea from getting nuclear weapons and long-range missiles, a line constantly repeated by experts across the political spectrum. The truth is that Pyongyang already has them.

Second, we need to embrace a financial-containment strategy—limiting the amount of illegal money going into Pyongyang’s atomic and missile programs—as the only way to slow and potentially halt any further advances of North Korea’s missile programs. We should insist that all nine UN Security Council resolutions are not only followed to the letter of international law, but strengthened every time North Korea tests another missile or nuclear weapon.