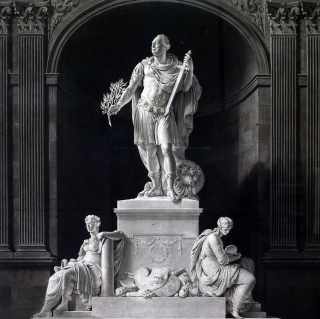 IN ONE memorable scene in the Hollywood spectacular The Patriot, Lord Cornwallis, the corpulent, pompous, preening servant of King George III, unleashes a volley of abuse at his subordinates. He denounces them for their inability to deal with the “farmers with pitchforks” (Mel Gibson among their ranks) who comprise the American revolutionary forces. Cornwallis himself appears more concerned about the whereabouts of his dogs (gifts from the king that had been kidnapped by the insurgents) and his tailored coat and tails (held up at sea because of the need to send rearmaments instead) than about his own men. In sum, the old boy is the epitome of ancien régime loucheness and absurdity—part villain, part bumbling buffoon.

The movie’s depiction taps into a familiar vein of hostility toward him—every American schoolchild knows that 1st Marquess Cornwallis was sent by George III to snuff out the American Revolution, and that his surrender to George Washington at Yorktown on October 19, 1781, effectively signaled the end of the Revolutionary War. As Cornwallis sailed back to the Old World, the ideas of the Declaration of Independence were realized, signaling America’s birth into nationhood and its successful struggle for freedom, which would make it a beacon for many others in the world. There the tale ends.

Or does it? To dismiss Cornwallis so thoroughly comes at the expense of the next quarter century of his life—a panoramic and fascinating career that took him to India, Ireland, France and India again, in a series of bloody sagas, all of which were of world-historical significance. It also saw him play an integral part in setting the foundations for British global power for the next century and allowing Britain to recover from a defeat in America that many feared would be catastrophic—and perhaps even the beginning of the end.

It is not that Cornwallis has been misunderstood, or even so much that he has been caricatured. It is that his life has been strangely neglected. In this regard, the scant attention he has received from British historians is a more important factor than any vilification he has suffered in the United States. Despite being one of Britain’s most important generals—and certainly one of the most politically able—he has no great, iconic victories to his name. Later contemporaries such as the Duke of Wellington or Admiral Nelson have tended to steal his thunder in terms of martial glory. And despite his accomplishments as a statesman, too, he is often relegated to the role of supporting cast in the era of the Revolutionary and Napoleonic Wars. The British public prefers the swashbuckling heroes of the period. British academics, meanwhile, are much more taken with the leaders, intellectuals or ideologues—the William Pitts, Edmund Burkes and Thomas Paines. Cornwallis seems to fall between two stools in the historical imagination.

Those interested in the various phases of Cornwallis’s life are still best served by the three-volume edition of his correspondence that was edited by Charles Ross and published in 1859. No British historian has ever attempted a comprehensive biography. The likelihood of this changing has actually decreased because of the way the historical profession has been increasingly divided into fields of domestic, foreign and imperial history—categories which would have made no sense to those who lived in Cornwallis’s era but which the aspiring historian of today is expected to operate within. The last sustained discussion of Cornwallis’s life was provided by an American couple, Franklin and Mary Wickwire, whose 1970 volume Cornwallis: The American Adventure was followed ten years later by Cornwallis: The Imperial Years, a sturdy examination of his career after the Revolutionary War. More recently, Andrew Jackson O’Shaughnessy gave him a sympathetic treatment in his award-winning 2013 book, The Men Who Lost America: British Leadership, the American Revolution, and the Fate of the Empire. O’Shaughnessy suggests that he enjoyed the most successful postwar career of any of the British generals who served in America.

Yet these efforts go against the tide. As William Anthony Hay noted in his National Interest review of O’Shaughnessy’s book, “British historians neglected a defeat that complicated the story of their country’s rise to imperial greatness, while Americans operated within the prejudices and assumptions of nineteenth-century patriotic writers.”

So the man who lost America (despite doing a better job than all of his predecessors), secured India for the British Empire, defeated the Irish Rebellion and briefly made peace with Napoleon is in danger of slipping off the historical radar as a result of Yorktown.

This is not to say that Cornwallis was some sort of undiscovered military or strategic genius, whom historians have denigrated unfairly. But the longevity of his career, the breadth of his experience and the lessons he learned along the way do provide some useful historical instruction—not least his ability to learn from the mistakes made in one politico-military theater and apply them in a different one. One need not conjure up a staunchly revisionist version of Cornwallis as a hero, then, in order to have reason to reconsider his career. The case for Cornwallis is simple: he presided over the stabilization of the British Empire after its greatest defeat, combined minute military maneuvers with a broader political objective, and wove together tactics and strategy. That he saw British power in operation firsthand across its various global fronts—and was able to reflect on the weaknesses and strengths of the British global system—is perhaps less relevant to modern British strategists, who are dealing with a rather more trim model these days. But it may just spark some interest among theorists of American power in the twenty-first century, still struggling with the implications of American empire, and hoping to create a sustainable version of global power.

CHARLES CORNWALLIS was born the sixth child and first son of Earl Cornwallis in London on New Year’s Eve in 1738. He studied at Eton College, then Cambridge University, before seeking a military education on the Continent. He began by receiving tutelage under a senior Prussian officer and then moved to the respected military academy at Turin. He first saw action fighting for the defense of Hanover, the German protectorate of the British royal family, and fought as a volunteer in the army of Frederick the Great of Prussia during the Seven Years’ War. In 1759, he received a commission as captain and rose to the rank of lieutenant colonel before the age of twenty-two.

The Cornwallis family had made its name and fortune through unstinting loyalty to the Crown over previous centuries. Yet it was not uncritical of the monarchy and leaned toward the Whig side in politics. Cornwallis took up his father’s earldom in 1762, meaning that he sat in the House of Lords and maintained a close interest in matters of state as his military career developed. He sided with a group called the “Rockinghamite Whigs,” a powerful opposition faction led by the 2nd Marquess of Rockingham. It was as a spokesman for this group that Edmund Burke made his name. On two of the defining issues of the mid-eighteenth century, the Rockinghamites were known for their opposition to George III and his government. The first was the trial of John Wilkes, a radical MP and journalist prosecuted for sedition by the government, something the Rockinghamites regarded as a tyrannical abuse of royal authority. The second was their condemnation of the Stamp Act of 1765, a direct tax imposed by England on newspapers in the American colonies, which was fiercely opposed by the colonists.

Cornwallis’s opposition to the government’s American policy was well known to George III before the war broke out in 1775. Nonetheless, as a career soldier, he offered his services to the king and was entrusted with a senior command, arriving in Cape Fear River in North Carolina in May 1776. Cornwallis was initially reluctant to condemn his superiors, Sir Henry Clinton and Sir William Howe, though their mistakes had given the revolutionaries the early impetus. The Wickwires go so far as to claim that, had Cornwallis arrived in America sooner, Washington may have been defeated—perhaps even “crushed.” This is a moot point, however. Cornwallis made colossal errors of his own, such as his failure to capitalize on his victory at the Second Battle of Trenton, where Washington escaped under the cover of darkness. Despite some of Cornwallis’s notable successes, such as his victory at the Battle of Brandywine in September 1777, Washington generally got the better of him in their encounters—culminating at Yorktown in October 1781.

FOR CORNWALLIS, the lessons of the American experience were as much political as they were military. The war had been caused by bad policy, and bad policy had made it extremely difficult to fight effectively. While the British won most of the conventional military engagements, they were operating in a hostile environment, partly of their making. Their local allies—the loyalist militias—were not only hapless on the field; their reckless behavior helped to create a growing number of irreconcilables to swell the revolutionaries’ ranks.