The Case for Monarchy in Libya 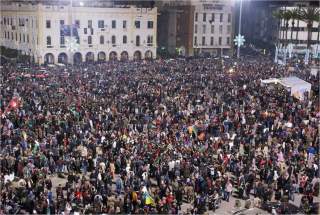 As Libyans were rushing to the polling stations under the sweltering sun on June 25, Salwa Bugaighis, a prominent lawyer and the country’s most vocal human rights activist, was leading the ‘get out to vote’ campaign on Facebook. A savvy observer of the Libyan political scene and symbol of the 2011 revolution, she tried to inspire a disillusioned electorate to keep the democratic flame alive. And for that she paid with her life. That evening, five gunmen forced their way into her house, shot Salwa in the head and then stabbed her to death. Her husband is missing, believed kidnapped.

It is no wonder then that only 600,000 Libyans showed up for an election that is pivotal for the country’s future.  One voter summed up the general mood as “we will keep voting until we get the right people in”. But just who are “the right people”?

The Tyranny of Cousins

Now that the votes have been cast, the incoming parliament, the 200-seat House of Representatives, will have eighteen months at its disposal to carve out a Constitution inclusive enough to bring back into the fold the multitude of splinter elements that make up the Libyan society. Just by looking at the country’s map, a vast rugged landscape made up of endless deserts, it’s easy to understand why the society is divided in some 140 main tribes (and countless other subtribes).

Under these circumstances, tribal relations, the bedrock of Libyan society, function differently from region to region. If, in the East (the province of Cyrenaica), what Ernst Gellner called ‘the tyranny of cousins’ dictates the course of the individual’s life—whom one marries, how one behaves—belonging to a tribe in the urban centers of Benghazi or Tripoli only serves to provide the individual with his core identity.

On the other hand, Libya’s tribes have been essential throughout history in maintaining the country’s security, acting as buffers against radical Islam (especially Salafism and Wahhabism). Rather than waging an endless war on the jihad movement, tribal leaders have repeatedly reached out to radical elements to incorporate them into the local councils and other institutions. With the fall of Gaddafi, however, fundamentalism has become a growing problem.

No Way In, No Way Out

Democracy cannot exist in a vacuum. With no democratic history and the absence of any form of well-functioning institutions, continuing down this road we risk a whole generation of Libyans becoming disillusioned with democracy. The low turnout in the latest elections expresses the apathy that has befallen the Libyan society and their overall disdain for democratic rule. As one top leader of a militant federalist group active in Benghazi quipped, “Western concepts of democracy do not work in Libya".

Just to get an idea of how bad things are now on the ground, a training facility set up by the United States with the goal of training the nascent Libyan security apparatus has been taken over by one of Osama Bin Laden’s associates and trusted lieutenants, Ibrahim Ali Abu Bakr Tantoush. The base, located twenty-seven kilometers outside of the Libyan capital of Tripoli, is now used to train wannabe jihadists, before sending them off to sure martyrdom in Syria or Iraq.

On the other side, a former Gaddafi henchmen turned freedom fighter after living for two decades outside of Washington D.C., General Khalifa Haftar, is in command of a rogue army involved in anti-fundamentalist skirmishes in the country’s East. The seventy-year old renegade even tried to impose military rule in February 2014, after appearing on live television and announcing that the Libyan central government had been suspended. Loyalists then stormed the Libyan parliament in Tripoli, before being repelled by Islamist-led militias summoned by the Prime Minister.

Faced with this chaotic series of events, some voices have even argued for breaking up the country according to its three historic regions (Tripolitania, Fezzan, Cyrenaica). This non-solution is unworkable—Islamists are ideologically against dividing the country as it would breach their ummah goal of a Pan-Islamic state. What’s more, Cyrenaica is responsible for almost 80 percent of Libya’s GDP, since it is home to the country’s main oil refineries and ports. Cash-strapped, the two other regions would soon descend into more chaos and bloodshed.

Democracy Out, Monarchy In

In short the country is split between a swathe of different tribes, which harbor opposing views and wield more power than the central government, thanks mainly to their powerful kinship links. Responsible both for Libya’s internal fragmentation and the fight against fundamentalism, these tribes hold the key to “winning the peace”. The question is: what can unite them?

The answer can be found in Libya’s past, before a twenty-seven-year-old Gaddafi launched his Green Revolution and turned the country’s political system to dust: constitutional monarchy. Indeed, even if the majority of Libyans are too young to remember, the country used to be called the Kingdom of Libya (between 1951 and 1969) under the rule of King Idris. A member of the very influential tribe and religious order called the Senussi brotherhood, King Idris commanded the respect of all other factions making up the Libyan population. Thanks to their considerable influence, the Senussis found the common denominator between the various strains of Islam and the multitude of Libyan tribes. What’s more, they have maintained their clout to the present day, as many tribal leaders are open to the idea of establishing a constitutional monarchy.

Unfortunately, this idea hasn’t gained much traction in the ongoing debate over Libya’s future, as pundits discounted any alternative other than creating a liberal democracy. It comes as no surprise then that when Libyan Foreign Minister Mohamed Abdel Aziz floated the idea for a return to monarchy earlier in April, his speech fell on deaf ears. The Minister argued that a constitutional monarchy would act as a uniting symbol for the nation, a ‘political umbrella’ that would ensure the legitimacy of the institutional process. This could be achieved by reverting back to the original 1951 Constitution, creating a bicameral Parliament and a technocratic government led by a Prime Minister.

The Western intervention in Libya that ousted Gaddafi came at the price of emboldening some of the least democratic elements in the Arab world. With policymakers now looking from the sidelines as the country slides further into chaos, maybe they should finally understand that ‘humanitarian interventions’ just create power vacuums, which are intrinsically incompatible with the rigid Western ideals of a liberal democracy. It might just so happen that, ironically, ‘the right people’ for Libyan democracy at the moment are actually the ones you can’t elect.