The Case for U.S. Support of Lebanon 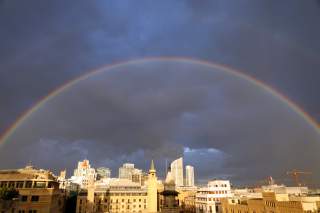 When Saudi Arabia’s Crown Prince Mohammad bin Salman (MbS) met with President Trump in Washington in March, the two leaders discussed regional issues ranging from the Iran nuclear deal to the ongoing wars in Yemen and Syria. But notably absent from readouts of their conversations was Lebanon and its internal stability—possibly because MbS is still recovering from Saudi Arabia’s controversial detention of Lebanese prime minister Saad Hariri in November. Additionally, MbS and the Trump administration share the view that Lebanon is already lost to Iranian influence. At a time of greater Saudi regional activism, the United States should encourage Riyadh’s attention on renewed investment and constructive engagement in Lebanon, instead of retreat and defeat.

Hariri’s house arrest was widely viewed as a misstep that only resulted in a surge of nationalism from many Lebanese bristling at what they saw as Saudi Arabia’s political interference and violation of their sovereignty. Still, MbS and the Trump administration believe the only option that remains is to use aggressive political and economic action to defeat Hezbollah. But U.S. military officials in the region and numerous regional experts remain convinced that the only realistic way to contain Hezbollah’s influence in Lebanon is a more assertive investment in its military, national institutions, and Hezbollah’s political opponents.

The possibility of another war between Israel and Hezbollah has become more likely, and would destroy any prospect of a strong Lebanon. Moreover, experts predict that Lebanon’s parliamentary elections, currently scheduled for May, will increase Hezbollah’s influence in the government. Similarly, if the Trump administration withdraws from the Iran nuclear agreement in May, this could provide a boon to Iran and Hezbollah’s anti-U.S. propaganda. Should the United States and Saudi Arabia have any interest in competing with Iran and maintaining a constructive relationship with Lebanon, the window for a fresh push in that direction is closing.

In an ideal world, American and Saudi policy would cut Hezbollah out of the Lebanese political system entirely. This understandable but overly ambitious goal sets up Lebanon—and U.S. and Saudi policy—for failure no matter the outcome of May’s elections. The United States and Saudi Arabia should instead minimize the potential damage of May’s elections and build a long-term plan to bring Lebanon back from political isolation.

While Hezbollah may make significant gains in May, Lebanon’s internal politics are not entirely in its favor. The Hezbollah-led political coalition includes Maronite president Michel Aoun’s Free Patriotic Movement and Speaker of the Parliament Nabih Berri’s Shia political group, Amal. Yet recent incidents shook the Lebanese public and exposed underlying tension between these political allies. In January, for instance, a video leaked showing Foreign Minister (and son-in-law of President Aoun) Gebran Bassil describing Speaker Berri as a “thug.” Just before the incident, Hezbollah also finalized an agreement to share a number of parliament seats with Amal at the expense of the Free Patriotic Movement.

Hezbollah smoothed tensions between the two parties reasonably well, but made it clear that supporting Amal leader Berri was its priority—possibly alienating its Christian political allies. Many Christians look to Hezbollah for protection from Sunni extremists in the region, but recent events have Lebanese Christians questioning whether Hezbollah will support their long-term interests. Lebanese Christians also fear that Hezbollah could use its political power to overhaul Lebanon’s confessional power-sharing system and give itself greater representation at their expense.

The first priority for the United States and Saudi Arabia should be to exploit existing political divisions and convince lukewarm Hezbollah allies that the two countries have more to offer Lebanon than the terror group. Washington and Riyadh should quietly reach out to Christians and others who have grown alarmed by Hezbollah’s growing political influence. In past elections, both Saudi Arabia and the United States have provided support to Hariri’s Future Movement and its allies. Even if the impact is minimal, it may be worth resuming this support to rebuild ties to Lebanese political parties opposed to Hezbollah.

Electoral support and relationship-building with the Future Movement and other parties, such as the nonsectarian Beirut Madinati coalition and the Christian Kataeb party, is an important component of this approach. Lebanon’s revised electoral laws, and greater weariness about Hezbollah, could provide a greater opportunity for independent parties and candidates to make gains in parliament. For its part, the United States has not allocated assistance funds to this critical issue in 2018, and only allocated paltry funds in previous years. In 2019 and beyond, the United States and Saudi Arabia should repair this shortfall and also boost funding for civil-society support grants, exchange programs, and local infrastructure projects that build ties to Lebanese society.

Second, on the security front, the United States and Saudi Arabia should resume funding for the Lebanese Armed Forces. Riyadh cut off this assistance in 2016 after the Lebanese government did not condemn attacks on Saudi diplomatic missions in Iran. Though the United States cut off Foreign Military Financing for Lebanon in 2018, it resumes that financing in 2019 and currently provides funding and training to the country’s armed forces through other sources. However, U.S. military officials were not able to point to a single meaningful example of assistance, or even engagement, between Lebanon’s armed forces and other Arab militaries. This regional isolation remains a serious obstacle to strengthening the Lebanese state and its ability to confront Hezbollah. The United States and Saudi should also tap Jordanian training facilities and expertise to build a stronger bridge between the Lebanese military and another critical U.S. partner.

Saudi will prove difficult to convince in this regard, but the Trump administration should use all tools necessary to win it over. The administration used its close relationship with MbS to generate renewed Saudi attention and involvement in Iraq. Similarly, the administration has requested $4 billion in stabilization aid from Saudi Arabia for Syria—though MbS has not publicly agreed to or rejected this request to date.

Third, the United States and Saudi Arabia should work with local journalists to highlight Iran’s influence in Lebanon. The best way to do so is to promote media freedom in Lebanon through material and technical support to independent news outlets and journalists. Lebanon is home to the most open and robust media landscape in the Arab world, but mainstream journalists have recently faced legal charges for criticism directed at the Lebanese and Saudi governments. Outlets sympathetic to Hezbollah or operated by the terror group remain popular, but they have lost followers in Lebanon, especially among Sunnis and Christians, because they are increasingly viewed as a mouthpiece for Iran. This presents a clear opportunity to support outlets with progressive and independent views that can compete with pro-Hezbollah voices.

U.S.-Saudi cooperation in Iraq and Syria could greatly enhance efforts to promote regional stability and counter Iran, but the two countries should find ways to expand this collaboration to Lebanon. For all its own imperfections and Hezbollah’s influence, Lebanon remains a rare example of pluralism and political openness, and a bulwark in a region where many societies have succumbed entirely to internal chaos and war. As MbS seeks to reform Saudi Arabia’s own social landscape and counter extremist forces in the region, Lebanon should not be let go without a fight.

Washington policymakers have long advocated for bilateral relationships that reflect a broader strategy in the Middle East. To pursue U.S. and Saudi interests in the region in earnest, any regional approach must include engaging Lebanon—even if both countries view it as a last-ditch effort.

Alia Awadallah is a research associate for National Security and International Policy at the Center for American Progress.