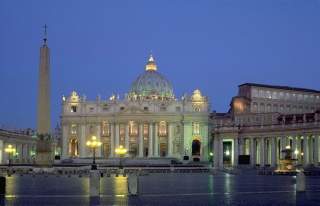 With great fanfare, before a crowd of 800,000, with 1,000 bishops and 150 cardinals in attendance and a TV audience of several millions, the Vatican recently added two new saints to its pantheon. Pope John XXIII and Pope John Paul II were canonized for having effected medical miracles that saved the lives of three women who had begged their intercession for, respectively, Parkinson’s, internal hemorrhages, and a brain disease.

Those were, obviously, marvelous outcomes for these three individuals. But pull back the lens just a bit and the mood of jubilation appears ill placed. In light of what is happening to Catholics in the Middle East, the crowd should have been praying for miracles on an entirely different scale.

In Iraq, Syria and Egypt, Christians face a relentless campaign of murder, kidnapping, arson, bombings and persecution. In Turkey, Lebanon and Palestine, the anti-Christian violence is less overt, but there, too, intimidation and discrimination have fueled a huge exodus. Islamic extremists and fundamentalists are determined to drive Christianity out of its birthplace in the Middle East—and they are succeeding. A few decades ago, 20 percent of the Middle East was Christian; today that is down to 4 percent. Iraq alone has lost 80 percent of its Christians during just the last ten years. By any standard, this is ethnic cleansing.

But the numbers, however dramatic, can’t express the human cost. The sectarian war and the random violence in Iraq and Syria are bad enough, but Christians face special targeting. Their churches are regularly mortared and firebombed, congregants killed by suicide bombers or assassins just for attending mass. In Iraq, I met priests who had been kidnapped, tortured and beaten. Their teeth had been knocked out with revolver handles and their spines broken with hammer blows, until finally, a ransom was scraped together and they were dumped on the street half-dead.

And what is Rome doing about all of this? Not very much. One almost gets the impression that religious persecution is too messy for today’s modern, ecumenical church. Consider how it has sanitized sainthood. Formerly, the path to sainthood was martyrdom—you became a saint by enduring agonizing trials and torments before being killed in horrific ways, all the while holding firm to your faith. Today you can live out your life in comfort, die a natural death, then heal an ailing person from beyond the grave, and be declared a saint. That’s much more civilized, but it obscures the harsh fact that Christians are still being hunted, tormented and killed in horrific ways, yet are heroically holding steadfast to the faith. Instead of being an inspiration, one feels that they are seen as a sort of embarrassing blemish on the pretty contemporary face of interfaith dialogue.

Consider, for instance, the statement by the Assembly of Catholic Ordinaries, in which they finally ventured to address the issue at all. Well yes, they acknowledge therein, Christians are being persecuted…although maybe the word persecuted is too strong…True, they are being murdered and driven from their homes…but they can take comfort from the words of Jesus, “happy are those who are persecuted for righteousness’ sake”…which is not to say, of course, that Christians are necessarily righteous! …waffle, waffle, waffle.

‘Persecuted’ is too strong a term? Tell that to the parents who lost their children when a convoy of school buses, ferrying students from the Christian area of Nineveh to their classes in Mosul, was ambushed. Tell that to the survivors of the massacre at Our Lady of Salvation in Baghdad, who—with the words “you are all infidels”—were taken hostage by armed gunmen who went on to execute fifty-eight of the worshipers, including small children. Tell that to the hospital director in Mosul who was told that her position is too high for a Christian and she and her family would be killed if she did not voluntarily resign. Tell that to the Christians in the rebel-held Syrian city of Raqqa, who have been informed that they are now “dhimmis” and must pay a special tax for the privilege of staying alive in “Muslim lands”, though they may not maintain churches or give any public sign of Christian observance.

The situation in Syria and Iraq is volatile, explosive and tragic, and remedies are not readily at hand. Still, there is much that Rome could and must do for its own.

Before we begin that discussion, though, we must remember that the Vatican is not just a prayerful, spiritual place—it is a political powerhouse of the first order. It commands an army of top-notch analysts and diplomats. Its diplomatic corps officially goes back to the year 1500, but its experience at navigating even the most Machiavellian corridors of worldly power predates that by centuries. Popes were not just moral authorities and observers of secular happenings, they were weighty players, shaping events in Europe, the colonies, and the world. Certainly, this formidable institution could come up with some effective strategies if it wanted to and hardly needs our advice. But here goes, anyway:

First, and beyond a doubt, Catholics are currently the victims of ethnic cleansing and religious persecution in the core historic region of the faith, and it is essential that Rome raise awareness about the issue. If nothing else, this would boost the morale of the afflicted, whose sense of abandonment and isolation is extreme. Visit Christian enclaves in these places, and you will constantly be asked: don’t other Christians know? Don’t they care? Why isn’t anyone helping us?

Secondly, this elevated attention would likely produce some helpful action, over time. It took years for the international community to take steps against the ethnic cleansing in the Balkans, but without consistent media attention and moral outrage, the Bosnians would have had no chance at all.

Third, the Vatican maintains powerful networks of influence. Its humanitarian organizations and NGOs are among the most effective in the world. Its legates are respected mediators. Though—by its own choice—it restricted itself to observer status at the United Nations, still its influence there is significant. Its emissaries could act on multiple levels to protect, resettle, and otherwise assist and advise the flock.

Fourth, Rome should reach out to moderate Muslim opinion leaders and political figures, who generally take pride in their region’s long history of religious and ethnic diversity and tolerance. Most Muslims regret the loss of their Jewish communities, and do not wish the Christian minority to experience the same fate. They will forcefully tell you that Christians and Christianity are part of the fabric of their societies, which they do not want replaced with some radical Islamist vision of a Caliphate. These are natural allies and should be consulted for tactical, strategic and moral counsel and help.

Indeed, some Muslim leaders have stepped forward to push back against the ethnic cleansing of Christians. This is most dramatically the case in Iraqi Kurdistan, which has become a safe haven for that country’s Christians. In Erbil, the local Christian community—one of the oldest Christian settlements in the world and a bishop’s seat since the year AD 100—can count on the protection of the Kurdish Regional Government, but more than that, the government has welcomed Arab Christians fleeing from Baghdad, Mosul and Kirkuk. The Kurdistan Regional Government funded a beautiful, modern Catholic primary and secondary school and has given land for a Catholic University. They provided a new home for the Baghdad Seminary after that facility was destroyed. They have stood up, armed, trained and are paying the salaries of a Christian volunteer self-defense force in embattled neighboring Nineveh. They are hosting an order of Indian nuns, come to set up a nursing program. They have refurbished villages for displaced Arab Christian farmers. Bashar Warda, formerly Archbishop of Baghdad and now Archbishop of Erbil, is free to build as many churches and erect as many crosses and statues of the Virgin Mary as he likes; it is his decision to build apartments for refugees and young families instead and make do with the large, splendid, highly visible St. Joseph Cathedral, smack in the middle of Erbil. And why are the Kurds doing this? Not for good PR, apparently, as their efforts are going unremarked and unheralded, and they do not boast of them. Prime Minister Nichervan Barzani says tersely, of course he protects Kurdish Christians. “They are our citizens like everyone else.” OK, and the non-Kurdish Arab refugees? His Minister Ashti Hawrami has a simple, compelling answer. “As Kurds we know what it means to be persecuted,” he says, apparently having less trouble reaching a diagnosis of persecution than the Assembly of Catholic Ordinaries.

Fifth, the Church should appreciate and encourage remarkable—and courageous—policies like the one in Kurdistan. With advice from moderate Muslim leaders, it should identify other potential Middle Eastern footholds for displaced Catholics, and support their efforts to take root there. It should assist the Erbil School of Nursing and the planned Catholic University and similar institutions that are useful to the public, regardless of faith, and thus help solidify positive social bonds.