The Celebrities Who Sell Iran's War in Syria 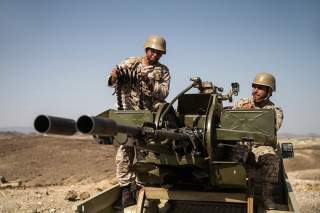 How does Iran sell its engagement in the Syrian conflict to its own public?

Celebrity TV hosts, actors and rich kids come in handy when pitching a farrago of nationalistic and religious causes to justify Iran’s involvement in the Syrian conflict.

Iranian officials rarely mention bolstering Syria’s Bashar al-Assad or maintaining access to Hezbollah in Lebanon as reasons for Iran’s intervention in Syria. Instead, defending the Shiite shrines and keeping ISIS away from Iran’s borders are the official theme vindicating Iran’s presence in Syria.

And a rather peculiar method is employed to peddle Iran’s message: formerly or currently banned celebrities now receive coverage from Iran’s conservative outlets, in exchange for offering favorable views on Iranian policies in Syria.

Reza Golzar was a leading actor in Iran, with a huge fan base among young teenagers. He was put on a blacklist and his picture was banned in movie theatres intermittently for sixteen years. That is apparently because his lifestyle was out of step with what the Islamic Republic’s rulers deemed acceptable. But his views on Syria are conforming to Iran’s policy.

In an interview with TV Plus, he opined that Iran’s intervention in Syria served its national interest. “If these prized people don’t fight in [Syria] they will have to fight with them near our borders and a number of them will slip into [the country].” But he stressed that his information on Syria was “incomplete,” and that he did not expect to get a work permit in exchange for articulating his position on Syria. “I am barred from working for the longest period in the history [of Iranian cinema] and I am not supposed to get anything.”

Formerly banned TV host Reza Rashidpour—well known for his tough interviews with Iranian politicians and entertainers—was also enthusiastically covered by conservative outlets for trying to dampen the perception in the society that financial incentives are the main motive for Iranian fighters to go to Syria.

Rashidpour, in his program on state TV, showed a portrait picture of a slain Iranian soldier in Syria who apparently missed his entrance exam for graduate school. He then complained about spiteful comments on his Instagram page that the “defenders of the shrine” were fighting in Syria for money. “Who is willing to get money for missing his graduate school entrance exam?” he asked. “Which of us is willing to get money for being struck in the hand with a bullet?” he added.

Of note, Rashidpour once invited Mehdi Karroubi—a Green Movement leader who is currently under house arrest—to his program months before the presidential election, which led to a widespread protest due to allegations of vote rigging. Karoubi didn’t mince words in the interview, and implied that the first-term election of Iran’s then president, Mahmoud Ahmadinejad, was also fraudulent. This and other candid comments by guests led to the suspension of Rashidpour’s program. He was eventually sacked from state TV and only recently reinstated as a host.

To counter the notion that the financial incentives are a key factor for Iranians to fight in Syria, FarsNews—believed to be linked to Iran’s Revolutionary Guards—alludes to a tale of a person from the new, conspicuously wealthy generation—a group in whose lifestyle the establishment has tended to find fault. Iran’s supreme leader, Ali Khamenei, once poured scorn on them after deadly car crashes. “I hear that young people from the generation of wealth, a generation intoxicated by their money, are driving luxury cars and parading in the streets, making the streets insecure,” he said, as quoted on his website.

But in a documentary-style video posted by FarsNews, the narrator, who fought in the Syrian war, had something unusual to say. On his cellphone, he showed a picture of his slain comrade in Syria, Mehdi Shirmohammadi, sitting on the trunk of a convertible BMW, describing him as a well-off individual who was living in Shahrak-e Gharb, a posh area of Tehran. “How much they should pay to convince him [to go to Syria]?” the narrator asked, concluding that it couldn’t be for money.

Yet, in the absence of credible polls in Iran, it is unclear what Iranians think of their country’s policy in Syria or to what extent the efforts of conservative outlets have been able to sway public opinion.

The traces of disapproval, however, over Iran Syria’s policy can be found in the social media, where the government had no direct control over them. An Instagram post by the celebrated Iranian actress Anahita Nemati was met with harsh criticism from her followers for claiming, “If it were not for the defenders of the shrine, Tehran would become like Paris,” referring to Paris terror attacks in November 2015. One comment accused Nemati of being “naïve” and a number of others wished Iran to become a place like Paris, suggesting the French capital is actually a better place to live than Tehran.

The numerous comments, however, suggesting that Iranians mostly fight in Syria for cash forced Nemati, in a subsequent Instagram post, to urge her followers to be fair and refrain from judging. “Ask yourself, would you be willing to be beheaded for money?” Nemati wrote, referring to the brutal method of ISIS’s executions in Syria.