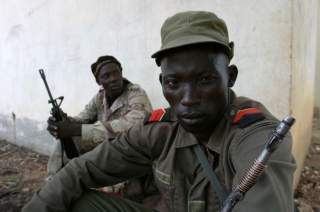 In July 1994, the Rwandan Genocide ended after Hutu extremists attempted to extirpate the Tutsi population and killed approximately 800,000 people. Westerners, those precious few who were paying attention, bowed their heads, vowed that nothing like this would ever happen again, and averted their eyes.

But the slaughter didn’t stop; it just moved next door. Militant Hutus fled to neighboring Zaire, exacerbating tensions with the Tutsi population there. This began an intricate chain reaction that destabilized the nation now called Congo and ignited two wars. Estimates vary, but one count puts the number of deaths from the Second Congo War at 5.4 million, giving it the dubious honor of killing more people than any conflict since World War II.

That violence continues today. And now another country in central Africa is coming apart at the seams.

The Central African Republic (CAR) is larger than France and has a population of nearly five million. It’s majority Christian with a small cohort of Muslims concentrated in the north. This religious and geographic divide is reinforced by the weather: during rain season, heavy flooding makes the roads impassable, isolating Muslim communities from the rest of the country.

General Francois Bozizé became president of the Central African Republic in 2003 after a coup overthrew his predecessor. Bozizé promised reform, but was unable to tame both his fiscal books and paramilitary fighters.

Discontent over Bozizé led in 2012 to the formation of the Séléka, meaning “alliance” in the native language of Sango. The Séléka was comprised mostly of Muslims fed up with the north’s isolation—those roads were still flooding and often plagued by bandits, too. As one Séléka commander later told the New York Times, “We wanted to develop the country, but the ex-president, Bozizé, he ignored our projects.”

The Séléka made quick inroads into the CAR heartland, assisted by mercenaries from neighboring Chad and the dreaded Janjaweed génocidaires from Darfur. The group signed a peace agreement with Bozizé in January 2013. But they later accused the president of refusing to abide by its conditions, after which they rampaged south to the capital of Bangui where they decapitated the regime and forced Bozizé to flee.

In his place, the Séléka installed Michel Djotodia, who had been made defense minister under the aborted peace deal. The first Muslim president of CAR, Djotodia dissolved the government and promised a transition to elections. He called for the disbanding of the Séléka, but the militiamen refused and their killings increased.

Those killings were carried out with an indiscriminate sadism that brings to mind the haphazard slaughter of Rwanda two decades earlier. Babies were fed to snakes. Men were fed to crocodiles. Civilians who strayed into fields were murdered by lurking gunmen. Thousands of child soldiers were recruited. Entire towns were emptied as their residents fled to churches, often the only dry spots in a country awash in blood.

One of those was a Catholic mission in the town of Bossangoa. A Guardian reporter who was offered a tour found a crush of 34,000 refugees who, despite their numbers, were keeping the facility impeccably clean. The presiding priest at the mission, Father Frédéric Tonfio, called for international intervention. “The Christians feel betrayed by the Muslims and are starting to feel vengeances in their hearts,” he said. “This is a very big challenge for the church.”

Tonfio’s warning would prove horribly prescient. CAR’s Christians, needing to defend themselves against constant assault, began forming militias they called “anti-Balaka,” meaning “anti-machete” in Sango as a rebuke to the Séléka’s weapon of choice. With the silent majority awakened, suddenly Djotodia was forced out of office, a Christian president was installed and the Séléka fled northwards. It was a vertiginous turnaround, but one thing remained constant: the slaughter. Despite their peaceful moniker, the anti-Balaka quickly became as murderous as their enemies against whom they retaliated with sanguinary massacres in the Muslim neighborhoods of Bangui.

One anti-Balaka child soldier explained the confoundedly simple cycle of violence to Vice News: “We are out for revenge,” he said. “My parents are okay with it because [the Séléka] killed my uncle.” Though the sectarian momentum has shifted, fear of the Séléka lingers in CAR. One of the most memorable moments of Vice’s documentary is when an anti-Balaka militant beats a guard who had fled his post because he thought their incoming van was carrying Séléka fighters. The guard was carrying a gun.

Despite these fears, it’s the anti-Balaka that is terrorizing the Central African Republic now. The militias have zeroed in on Muslim communities in the northwest, resulting in a massive Muslim exodus. Amnesty International has accused the anti-Balaka of trying to ethnically cleanse CAR. The United Nations, coated in molasses as always, got around to releasing a report earlier this month that concluded ethnic cleansing was occurring in CAR, but not genocide. (The UN may be ineffective at many things, but splitting hairs isn’t one of them.)

After he was left with only 270 meagerly equipped troops to try to prevent a genocide in 1994, General Romeo Dallaire, who commanded the UN Assistance Mission for Rwanda (UNAMIR), wrote in his memoir: “If UNAMIR had received the modest increase of troops and capabilities we requested in the first week, could we have stopped the killings? Yes, absolutely.” Yet despite the smaller scale of the carnage in CAR, international troops haven’t restored order. France deployed 2,000 troops to disarm the Séléka (CAR is a former French colony), but they completely underestimated the anti-Balaka, leading Muslims to accuse them of favoritism. The UN deployed a peacekeeping mission, but Amnesty International says it “failed to stop the violence.”

And challenges continue to mount. The UN is now warning that CAR, one of the poorest countries in the world, is facing a food crisis that affects as much as 30 percent of its population.

Last week, those who keep up with their Facebook feeds likely saw a friend post a story about Boko Haram with a rueful appended comment about how the West needs to wake up. But even most of those sitting bolt upright in bed when it comes to Nigeria aren’t aware of the chaos just across the sub-Saharan. Americans deplore violence, but have a gaping blind spot over central Africa, one of the most violent parts of the world. The region only seems to pique our interest when it’s trendy, like the spectacularly slacktivist #StopKony campaign, now buried for all time under a mountain of Starbucks cups and puppy videos.

This is understandable. The Middle East holds our attention, because we have both security and economic interests there, while central Africa, though glistening with gold and diamonds, has little strategic importance. But there’s still something curious about an America that postures as a missionary for human rights while blotting out one of last year’s most deadly episodes. Even France, fresh off an intervention in Mali, is growing weary of its African adventures. Mass killings, it seems, will do that to you.