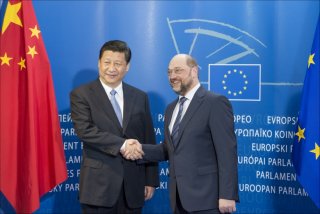 Chinese foreign policy has been stuck in a rough patch for the last two years. In East Asia, its territorial and maritime disputes with its neighbors have growing more ugly and dangerous. The all-important Sino-U.S. ties are seriously strained because of cyber espionage, Washington’s support for China’s defiant neighbors, and rising strategic distrust.

But for Beijing, there is at least one bright spot on the external front: its relations with major European countries have never been better. One can gauge Chinese success in wooing Europe by the number of European leaders who have jetted off to Beijing in recent years.

The Sino-European lovefest is by no means a one-way street. The latest Chinese charm offensive in Europe was led by President Xi himself. In April of this year, he swung through the Netherlands, Germany, France, and Belgium on a highly publicized state visit and became the first Chinese president to be hosted by the European Union at its headquarters in Brussels. In June, China’s number two, Premier Li Keqiang, was in Britain (where he was given an audience with the Queen, an unusual gesture that broke British royal protocol because Li was not a head of state).

Beijing’s diplomatic success in Europe has as much to do with China’s Machiavellian tactics as with European weaknesses. Chinese leaders have long spotted Europe’s well-known Achilles’ heel—lack of policy coordination, rivalry, excessive belief in its soft power, and desperate urge to compete with American firms for deals in China. In addition, unlike the United States, which as the guarantor of peace and stability in Asia unavoidably has conflicting security interests vis-à-vis China, Europe blissfully is far removed from the geopolitical tensions generated by China’s growing military power and assertive foreign policy.

As a result, Chinese leaders seem to know which buttons to push to produce desired response in Europe. With European economies either growing more dependent on exports to China (such as Germany) or desperately trying to strike new deals with China as a source of growth (that’s everybody else), China is seen in many quarters of Europe as something akin to its economic savior. As two-way Sino-EU trade in goods and services reached nearly $650 billion last year (EU exports to China topped $237 billion in 2013, a new record), China now can use its enormous leverage to achieve its strategic goals.

One of these goals is to ensure that major European powers would respect Chinese “core interests” as Beijing defines them. To be sure, this has been a bitter pill for the Europeans to swallow. Take human rights for example. Long-time watchers of Europe know that its leaders have taken immense pride in their promotion of human rights. But apparently these Europe’s political elites had little idea of who they were dealing with when they tried to stick to their professed principles. In the case of China, European leaders began by optimistically assuming that they could have their proverbial cake and eat it, too. Specifically, they thought that they could continue to maintain cordial official ties with Beijing and sign business deals even if they occasionally risk gestures on human rights that might upset Chinese leaders.

They found out, bitterly and belatedly, that they were totally wrong when one of their gestures on human rights in China—meeting the Dalai Lama—infuriated Beijing to such an extent that China adopted harsh punitive measures (suspension of high-level contact and business deals) until major European leaders (privately) acknowledged their mistakes and promised not to offend Beijing again. So far Beijing’s tactics have a 100 percent success rate—successive European leaders (including David Cameron and Angela Merkel) have been subjected to such treatment and appeared to have been cured of their desire to meet the Dalai Lama, who appears to be welcome only in two capitals—Washington and Tokyo—these days.

The coming test of China’s ability to influence Europe’s foreign policy is clearly on the security front. A decade ago, Beijing suffered an embarrassing defeat when its efforts to get the EU to lift its post-Tiananmen arms embargo fizzled out due to American opposition. Although China has not made another attempt to put the Europeans on the spot, observers need to watch how Europeans react to the rising geopolitical tensions in East Asia and the continuing deterioration in U.S.-China relations. So far, European leaders have been treading carefully on China’s territorial disputes with its neighbors, perhaps out of deference to Beijing’s professed “core interests.” No major European leaders have publicly criticized Chinese actions. Beijing must be surely pleased.

Washington can only watch the warm Sino-EU ties and European habit of capitulating to Beijing’s pressure tactics with frustration. In the short-term, there is little else the U.S. can do. European leaders are pragmatists and know they must do anything to lift their economic fortune before they can stiffen their spines. Unfortunately, Chinese leaders know this, too.

Minxin Pei is the Tom and Margot Pritzker ’72 Professor of Government and a non-resident senior fellow of the German Marshall Fund of the United States.