The Chinese 'Century' Is Already Over 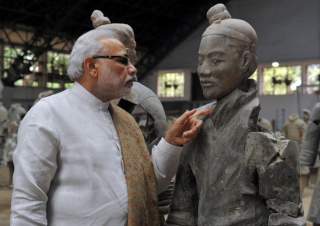 On Sunday, U.S. Secretary of State John Kerry completed a two-day trip to Beijing. The day before, Indian prime minister Narendra Modi wrapped up his three-day visit to Xian, Shanghai, and Beijing. Everyone, it seems, is going to China, implicitly acknowledging that this is indeed its century.

In reality, however, the period of Chinese primacy, if it ever existed, is just about over. Neither Modi nor Kerry was in any mood to accommodate Beijing on core issues.

We start with Modi. The Indian leader was happy to travel to China to pick up commitments for Chinese investment into his country, and on this score, he appeared successful. On Saturday, he inked twenty-six memos of understanding for business deals valued by his government at $22 billion.

Modi, however, was not persuaded to agree to what Beijing wanted. He did not, for instance, endorse Chinese president Xi Jinping’s “One Belt, One Road.” This initiative, considered the centerpiece of Xi’s foreign policy, seeks to create trade routes through Central Asia, the Middle East, Africa, and the Indian Ocean connecting China to Europe. Modi, of course, did not give an inch on China’s expansive claims to India-controlled territory.

And in public, he surprised observers by telling the Chinese to be more accommodating. “I stressed the need for China to reconsider its approach on some of the issues that hold us back from realizing full potential of our partnership,” Modi said while in Beijing. “I suggested that China should take a strategic and long-term view of our relations.”

“For him to say we hope the Chinese will reconsider their approach—it’s very politely put,” said Siddharth Varadarajan of the Indian news site The Wire. “But that’s quite a strong way to put it.”

Kerry also used strong words, from all accounts. As a State Department official said before the visit, the Secretary of State was traveling to China to “leave his Chinese interlocutors in absolutely no doubt that the United States remains committed to maintain freedom of navigation.” Xinhua, China’s official news agency, put it this way: Kerry was coming to Beijing to “pick a fight.”

In fact, Kerry had hoped to find a diplomatic solution, but neither side budged on the South China Sea during the weekend meetings.

(Recommended: Are American B-1 Bombers Headed to Asia to Deter China?)

None of this is to say that China cannot make agreements with India or the United States on specific issues. Kerry, for his part, talked about progress on climate change and terrorism, for instance. Modi’s trip resulted in the signing of two dozen government-to-government framework agreements on Friday. And as the widely quoted Madhav Nalapat of Manipal University has pointed out, India and China share strategic interests and can work together.

Nonetheless, as Beijing adopts harsher policies, the areas where it can cooperate with others shrink. And the areas of disagreement are becoming more important, therefore more difficult to solve.

Take the South China Sea, for instance. Despite what Xinhua said, it was China picking the fight. In that critical body of water—annual seaborne commerce there totals $5 trillion—Beijing claims virtually all the islands, reefs, and shoals and about four fifths of the water as its own.

Chinese officials maintain America has no legitimate interest there. “The United States is not a party in the South China Sea disputes, which are between China and other claimants and should be handled by those directly involved,” Xinhua stated on Saturday.

So China is telling Washington to abandon America’s oldest foreign policy, the defense of freedom of navigation. That is unacceptable for the ultimate guarantor of the global commons. Various sources, starting with the Wall Street Journal, have pointed out that the Pentagon is drawing up plans to send U.S. vessels and aircraft to challenge Beijing’s sovereignty claims that impinge on freedom of navigation; in other words, those claims that purport to turn international sea into Chinese territorial water.

At the beginning of this century, Beijing was able to compromise on those claims. Yet, for more than a half decade, it has not signed an agreement to settle a border dispute. And there is little sign of compromise in the near term, as Xi Jinping’s statements make clear. As the Chinese economy continues to erode, the Communist Party is increasingly relying on nationalism to bolster legitimacy, and as it becomes more nationalistic, its ability to work with other nations has markedly declined.

Beijing and Washington like to talk about “win-win cooperation,” but Beijing is deliberately creating zero-sum contests. So relations going forward between the two capitals will fundamentally change, and they promise to turn decidedly nasty as Beijing is forcing issues that cannot be compromised. As Kerry said on Saturday, “Where we may have different opinions, we don’t simply agree to disagree and move on.”

Washington once had a policy of moving on whenever there was disagreement with Beijing. The concept was that America could overlook current problems because eventually the Chinese would enmesh themselves into the international system and work as partners for peace. That optimistic view is changing as it is becoming increasingly evident that Chinese officials do not share American goals or the goals of China’s neighbors.

Similarly, in New Delhi there seems, over time, to be less optimism as well. Modi’s China trip was not the “complete and utter failure” that some charged—partisan criticisms can be overblown—but not many thought real progress had been made, either.

And that is why the Chinese century is coming to a close. Both the world’s most populous democracy and its most powerful one are now viewing China in darker terms—and beginning to act accordingly.