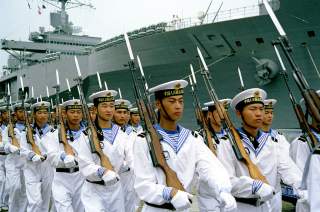 Over the summer, Chinese naval media announced the building of an entirely new kind of PLA Navy (PLAN) ship. This is not China’s first indigenously built aircraft carrier, nor the much-anticipated new class of nuclear strategic submarine or nuclear attack submarine. It is not the gargantuan Type 055 cruiser or the expected Type 081 helicopter carrier. Unlike the widely admired Type 056 light frigate that China has been producing “like sausages” of late to police the near seas, this PLAN ship most likely will be a class of one.

The new ship is actually a “tall ship” with billowing sails that will be used to train Chinese cadets. However, this odd duck among China’s emerging armada of sleek, well-armed vessels stands out. Indeed, it deserves some special attention, because it actually forms an important symbol of China’s emerging status as a naval power in the twenty-first century. Washington’s many China hawks will likely find a way to spin this development as a threat to U.S. national security. That should be entertaining, but as with most aspects of the venerated bubble’s thinking on China and Beijing’s maritime policies, don’t believe the hype.

The project is discussed in some detail in an article from the July 2016 issue of Modern Ships, [舰船知识] published by the giant Chinese warship building conglomerate China Shipbuilding Industry Corporation (CSIC). In seeking to make the case for such an enterprise, the author asserts that naval development requires that a navy must simultaneously look forward (e.g., new technologies, tactics, etc.), but must also cultivate a respect for naval and maritime traditions along with a keen understanding of the path it has followed. Hinting at a critique of the Chinese “tall ship” project, the article suggests that some may argue that such ships are inherently “Western,” and have no relationship to the Chinese navy. But the author explains, “This outlook demonstrates a lack of knowledge about the history of the Chinese Navy.” In fact, the article explains that the late Qing developed several training vessels under sail, starting with the 340-ton “Build Might” [建威], moving to the 400-ton “Agile” [敏捷] and finally evolving to the dual sailing/steam 1900-ton “Crossing” [通济], that was apparently sunk intentionally in a river channel in 1937 to block the Japanese invaders.

It was not until the 1980s that the PLAN rediscovered the importance of a large, purpose-built navigation training vessel [航海练习军舰], when it first deployed the “Zheng He” in 1987. As for hoisting sails, the PLAN’s first sailing unit was only established in 2006 Dalian Naval Academy. However, this analysis emphasizes the very powerful impression made by the visit of the Mexican navy’s tall ship training vessel during the sixtieth anniversary jubilee of the PLAN in 2009. According to this rendering, “That ship’s sail exercises got everyone’s attention.” The article explains that it was not long after that the PLAN constructed a land-based, large-scale sail exercise facility at its Yantai Navy Aeronautical Engineering University on the Yellow Sea. One can infer that this was the point wherein serious planning began for China’s tall ship that is now coming to fruition. Just this month, another such land-training sail facility was completed at the Dalian Academy, according to a CCTV-13 news report.

Well, what’s the big deal about a large-sale training ship anyhow? Does it really merit our collective attention? In fact, the Chinese naval analyst deals upfront with this argument, noting that some consider such large sailing vessels in the naval service as “mere decoration at the front of the store.” [只不过是将点门面的装饰品]. However, this author decries the “process of digitization” [日益电子化] that is now prevalent in all aspects of naval operations, from combat to command, to all equipment. In training officers to become true “masters of the sea,” the ship can dispel a dread of the sea and replace it with a “genuine confidence to cope with the ocean environment.” As one would expect, the value of teamwork receives major emphasis on such ships, but this piece also emphasizes the considerable importance of physical courage for training and testing naval cadets. Of course, the author notes that such large sailing vessels will have important ceremonial duties, honoring maritime history and culture. Then, there is the diplomatic role for such vessels. Indeed, the author makes the interesting observation that warship visits to foreign ports in peacetime often convey a feeling of swagger or “a show of one’s strength” [耀武扬威] that could appear intimidating naturally, but a large sailing ship lacks armament altogether and is certain to generate excitement in any port without any related negative sentiments.

Ultimately, this ship says a lot about Chinese naval ambitions and the future of Chinese foreign policy. For sure, this ship may play an important role in producing more competent Chinese naval officers, but it betrays a certain longing to be accepted into the elite club of seafaring nations. Above all, China wants to demonstrate not only that it is not inferior, but also that it is deserving of respect. In that way, the sailing vessel is somewhat analogous to China’s quest for the Olympic Games. And that is actually the proper context for understanding China’s strategic and maritime goals. In other words, Chinese naval power goes beyond a search for security (a more or less rational proposition) and rather seeks “face” [面子] that can be translated as prestige or respect.

With that in mind, we can poke some holes in some common myths that surround Chinese naval development. Is the Chinese navy “on the march,” expanding in an aggressive pattern of conquest that could one day reach across the Pacific? Hardly. Beijing has created a “base” in Djibouti, but this looks much more like a logistics-support facility than a war-fighting outpost. It is unlikely that Beijing would choose a location adjacent to a similar facility for the United States, Japan, France and other countries if they anticipated armed conflict in the area. Beijing’s (somewhat myopic) focus is on reefs and rocks around its periphery, not on threatening the United States. Is the PLAN bent on seizing and controlling the South China Sea? Again, the evidence is incredibly thin to suppose there is an ambition to “control” the voluminous maritime traffic crossing the South China Sea as hawks have alleged. Of course, those same hawks are less apt to mention that most of that maritime trade is going to and from Chinese ports, suggesting the nonsensical and almost farcical “ambition” of trying to sever such a key trading route. Quite the contrary, the PLAN is partly motivated by the fear that other great powers will seek to block the South China Sea, hence the repeated discussions about the so-called Malacca Dilemma.

Beijing is not intending to erect “EZ-pass” toll gates on the South China Sea for Chinese ships only, but rather lays claim to the hydrocarbons and fish in these waters. Almost every so-called incident has involved vessels related to resource extraction (with some added sensitivity regarding attempts to track Chinese strategic submarines). Chinese sources, moreover, often openly admit that the resources do not actually amount to much (e.g., Naval and Merchant Ships [舰船知识] July 2014), so that the primary motive is again revealed: face or prestige. The new Chinese airstrips in the South China Sea fit quite well into this pattern of motivation, for the most part, since they make for nice photo ops, but actually present serious operational challenges for Chinese forces.

Beijing’s quest for respect is bound to create much soul searching and even heartburn in Washington (and Tokyo), but it need not lead inevitably to rivalry and armed conflict. The goal of gaining “face” is not concrete, but rather quite malleable. For example, the Mainland does not really care much about what goes on in Taiwan as long as Taipei does not challenge the principle that the island is part of China, a principle that few Americans seem to realize is enshrined in the island’s official name. It is, by design, called the Republic of China, not the Republic of Taiwan. For the Mainland, this issue concerns form over substance, symbol over reality, and thus is not overly threatening. Likewise, China’s focus on achieving respect does not require the United States to leave Asia, nor the destruction of Washington’s cherished hub-and-spoke system. Rather, it does seem to entail an unspoken acknowledgement of Chinese military superiority in the “near seas.” But this is, more or less, already a reality. It is not outside the norm for a great power, and does not amount to a serious threat to the United States—nor does a “drone snatch,” for that matter, however impolite.

True, the military balance in the Asia-Pacific is in a disturbing and unstable state of flux. In that respect, China has indeed pulled ahead in certain areas, as I have written before. For example, the PLA’s prowess in fielding capable antiship missiles (both cruise and ballistic) does indeed present a daunting deterrent. On the other hand, Washington retains numerous advantages, including its more capable and experienced submarine force and some highly motivated and well-equipped allies. However, a deeper appreciation of the China issue will realize that “threat” is a function of both capabilities and intentions. Regarding the latter, China’s obsession with face turns out to be rather benign, predictable and often amenable to negotiated solutions. One may hope that China’s new naval ambassador, the tall sailing ship currently under construction for the PLAN, could go some distance toward revealing China’s decently civilized, if not altogether panda-like, disposition toward the wider world and the oceanic domain. According to a December 2016 Chinese news report, the unique ship will be launched at the end of 2017.