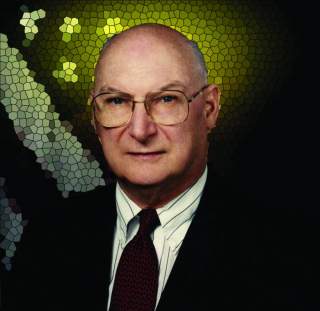 I FIRST met Andrew Marshall, the longtime director of the Pentagon’s Office of Net Assessment (ONA), in the mid-1990s. The occasion was one of the late Harvard professor Samuel P. Huntington’s “Strategy and National Security” conferences at the Wianno Club on Cape Cod. A number of Huntington’s students, including Eliot Cohen, Aaron Friedberg and my Olin Institute for Strategic Studies colleague Stephen Rosen, were also Marshall protégés—alumni of St. Andrew’s Prep, as they referred to themselves—having spent some of their careers under his tutelage in the ONA.

The conference gave me my first taste of the reverence with which they held Marshall. Rosen had arranged to recognize him at the dinner for the thirty or so national-security experts in attendance and had carefully selected a memento to mark the event. It was a handsomely framed print of Jean-Léon Gérôme’s painting of François Leclerc du Tremblay, the Capuchin monk who was Cardinal Richelieu’s alter ego. Du Tremblay was so influential that French courtiers referred to him as his “Gray Eminence,” in deference to the authority he reputedly exercised behind the scenes belied only by the color of his humble friar’s habit.

It thus does not come as a surprise that in their new book The Last Warrior, two more St. Andrew’s alums, Andrew Krepinevich and Barry Watts, adopt a similarly reverential tone. They trace the arc of Marshall’s career, beginning with his early days at the newly established RAND Corporation through his founding in 1973 and long-term directorship of the ONA, from which he is slated to retire in 2015 after sixty-five years of U.S. government service. He was, they tell us, “an intellectual giant comparable to such nuclear strategists as Bernard Brodie, Herman Kahn, Henry Kissinger, James Schlesinger, and Albert Wohlstetter,” and was one of the most visionary thinkers of the post–Cold War era by virtue of his advocacy of the “revolution in military affairs” (RMA).

With their worshipful tone and appropriation of the parochial-school designation for Marshall’s coterie, the authors invite comparisons with the doctrines of the Catholic Church. To my well-catechized eye, it all resembles the panegyrics in The Lives of the Saints that I dutifully absorbed as a child. Unlike the biographies by the Roman pagan Plutarch in his Lives of the Noble Greeks and Romans upon which they are modeled, The Lives of the Saints are short, easily digestible biographies of the holy men and women of the church that offer tutelage in moral sanctity rather than a searching chronicle. They accomplish this hortatory task by emphasizing the saints’ virtues and glossing over, or passing over altogether, the less edifying aspects of their lives.

Here the case for canonization rests on two grounds. First, Krepinevich and Watts aver that Marshall has been involved in nearly every momentous national-security decision since the Manhattan Project, beginning as an economics graduate student laboring alongside physicist Enrico Fermi to repair the University of Chicago’s cyclotron and later staying up until all hours with his RAND colleague Herman Kahn running the Monte Carlo simulations of radiation flows that “paid off” in the 1952 Eniwetok H-bomb explosion. His strategic acuity, we are instructed, was such that early on he diagnosed the weaknesses of Warsaw Pact conventional forces and challenged the “exaggerated threat” to NATO in the intelligence community’s “worst-case” assessments. He also presciently anticipated the easy U.S. victory over Iraq in 1991, harbored doubts about the George W. Bush administration’s plans for war in Iraq in 2003 and espoused a rebalancing toward Asia to counter growing Chinese military power. Such a record of strategic sagacity demonstrates that Marshall was endowed with the ability to “peer further into the future than most others in the U.S. government.”

Second, unlike the rest of the national-security bureaucracy, which is prisoner to a “conventional, but often self-serving, wisdom,” Marshall was a heroic figure who rose above parochial interest and perceptively limned the contours of the security challenges the United States has faced since the beginning of the Cold War. Marshall “was—and remains—a pragmatic strategist who has consistently looked further into the future and focused more on the first-order problems of long-term competition in peacetime than those around him.” Given that, Krepinevich and Watts maintain that “Pentagon decision makers would do well to take Marshall’s views to heart. His observations on such matters over three score years reveal a brilliant strategic mind with an uncanny ability to peer into the long-term future and see the situation ‘plain’—for what it is—more clearly than most around him.”

Given the general tenor of this work, there is another Roman Catholic institution that it seems appropriate to invoke for a, well, net assessment of Marshall himself. Until quite recently, the Vatican team analyzing the case for the canonization of a potential saint included not only its proponents but also a canon lawyer whose job it was to make the best case possible in opposition. Alas, the institution of the advocatus diaboli is now largely defunct. Nonetheless, I propose that, at least for the purposes of reviewing Marshall’s career, we resurrect it and ask a pertinent question: How would the devil’s advocate view it?

MARSHALL’S LEGENDARY reputation begins with his silences. Marshall hardly ever speaks in public. He said little at the Wianno conference we attended together, which, as Krepinevich and Watts report, is par for the course given his predilection for what they loftily refer to as a “sphinxlike demeanor.” (As the advocatus might ask, what if he just doesn’t have much to contribute?) That does not mean they think he is silent where it counts in the corridors of power. From the beginning, Marshall insisted that his office report directly to the secretary of defense. He and his followers have fiercely resisted periodic efforts to disconnect the ONA’s direct line to the secretary of defense and place it under a lower-ranking official, as in 1985, when it reported to Under Secretary of Defense for Policy Fred Iklé.

Moreover, “because most of the assessments produced by ONA have been highly classified and written primarily for the use of the secretary of defense,” Krepinevich and Watts explain, “understanding of what Marshall’s office has accomplished over the last four decades has been limited, even within the Defense Department.” Indeed, of the roughly twenty-five net assessments his office has produced over the years, only one—the 1992 Military Technical Revolution report—has been declassified. Marshall’s followers attribute his indirect approach to his modesty and lack of ego. A skeptic might add that it also deflects criticism toward others.

To get a balanced perspective of Marshall’s standing, I consulted Bruce L. R. Smith’s classic history of RAND from its formative years through the mid-1960s (which roughly parallels Marshall’s tenure there). His name is not mentioned. What’s more, a review of the memoirs of the secretaries of defense whom Marshall subsequently served turns up only two references to him: a perfunctory mention by Harold Brown, and a fulsome embrace by Donald Rumsfeld, who “valued Marshall’s thinking” on the growing Soviet threat in the 1970s and the increasing military role of technology in the 2000s.

Krepinevich and Watts recount a vignette from 2001 in which Rumsfeld invited Marshall to lunch in the Pentagon dining room to telegraph his support for the director of the ONA. Of course, as Krepinevich and Watts realize, Marshall’s embrace by Rumsfeld, one of the architects of the Iraq debacle, is a mixed blessing for their cause because it is difficult to separate Rumsfeld’s enthusiasm for high-tech warfare—an enthusiasm that Marshall’s faith in the RMA helped encourage—from the Bush administration’s fatally bungled occupation of post-Saddam Iraq.

WHAT, PRECISELY, was Marshall’s distinctive approach to the art of “net assessment”? Krepinevich and Watts note that an answer to this question is not straightforward because Marshall “was extremely reticent to define or to elaborate his views on what a ‘net assessment’ was or would accomplish.” It is clear that what he envisioned was the antithesis of the dominant RAND approach: systems analysis. This technique sought to combine highly quantitative operations research and cost-benefit analysis to formulate higher-level U.S. national-security policy. But a positive definition remains elusive.

Marshall used the term “net assessment” in a different manner than many military professionals do—that is, as an analysis of the likely outcome of a major military campaign or war. “Estimating [an opponent’s] current posture is a traditional military intelligence problem, and is largely concerned with finding out as much as possible about specified countries’ current and past military posture, past R&D and procurement decisions, etc.,” Marshall explained in a 1966 paper. What Marshall had in mind was “estimating an opponent’s military posture, and, in particular, his future military posture.”

Krepinevich and Watts commend Marshall’s notion of net assessment because it has proven so durable. But even they concede that it is long on diagnosis but short on concrete prescriptions. They recount, for example, that Marshall offered only indirect guidance to policy makers, once advising Rumsfeld that he needed to think about the U.S.-Soviet competition as a chess game but never telling him what moves to make. It could be the case that Marshall’s approach has survived precisely because it is so oracular and nebulous.