The Collapse of Iraq and the Rise of ISIS: Made in America? 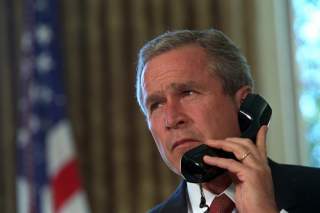 Chaos is spreading from the Middle East outward as hundreds of thousands of Syrian refugees pour into Europe. Over the last decade millions of Iraqis and Syrians have fled their homes. Western governments are proving far better at assigning blame than finding solutions.

The Republican meme is that every problem, including in the Middle East, is Barack Obama’s fault. Although emphasizing independence and self-reliance for America, they deny responsibility and accountability for their party. According to the GOP, George W. Bush left America and the world secure. The feckless Obama administration allowed the collapse of Iraq and rise of the Islamic State.

For instance, Jeb Bush defended his brother’s policies. He cited the “brilliant, heroic, and costly” success of the Iraqi troop surge, asking “why was the success of the surge followed by a withdrawal from Iraq, leaving not even the residual force that commanders and the joint chiefs knew was necessary?” He complained that “now we have the creation of ISIS.” In contrast, he contended, “had we kept the 10,000 troop commitment that was there for the President to negotiate and to agree with, we probably wouldn’t have ISIS right now.” Bush declared that “The one thing about my brother: he kept us safe.”

These claims are self-serving, even deluded, a political fantasy. The George W. Bush administration created many of today’s worst geopolitical problems.

First, President Bush used a terrorist attack conducted by Saudi citizens trained in Afghanistan as an excuse to invade Iraq, a long-time objective of neoconservatives as part of their plan to reorder the Middle East. Administration officials justified preventive war based on the claims of a dishonest informant provided by a crooked émigré hoping to rule Iraq. War advocates planned to establish a liberal government aligned with the West, governed by an American puppet, friendly to Israel, and home to bases for U.S. military operations against its neighbors. These deluded plans all came to naught. More than a decade later the invasion is viewed by most foreign policy analysts as a historic mistake, American’s worst foreign policy blunder in decades.

Second, after ousting the Sunni dictator whose authoritarian rule held the nation together, the administration mishandled the occupation at every turn. The U.S. failed to exert control, allowing widespread looting, and disbanded the military, creating a large pool of angry and unemployed young men. Then Washington attempted to remake Iraqi society, pushing an American-made constitution and deploying U.S. political appointees even to draft Baghdad traffic regulations.

But the administration established a sectarian regime in Iraq as conflict flared and Iraq disintegrated: perhaps 200,000 Iraqis died, hundreds of thousands of Christians fled their country, and millions of Iraqis were displaced. In the midst of a virulent insurgency and civil strife the administration underwrote the “Sunni Awakening,” through which Sunni tribes turned against al-Qaeda in Iraq. However, Washington failed to achieve its underlying, essential objective of sectarian reconciliation.

Bush continued to support the Maliki government even as it ruthlessly targeted Sunnis, setting the stage for Iraq’s effective break-up. In 2007 U.S. military adviser Emma Sky wrote of the U.S. military’s frustration “by what they viewed as the schemes of Maliki and his inner circle to actively sabotage our efforts to draw Sunnis out of the insurgency.” Al-Qaeda in Iraq survived, mutating into the Islamic State. The Bush administration then became one of the Islamic State’s chief armorers when Iraqi soldiers fled before ISIS forces, abandoning their expensive, high-tech weapons which U.S. aircraft had to destroy last year.

Third, President Bush failed to win Iraqi approval of a continuing U.S. military presence and governing Status of Forces Agreement. With Americans ready to leave and Iraqis determined to move on, Bush planned an American exit. Retired Army Chief of Staff Gen. Raymond Odierno explained: “us leaving at the end of 2011 was negotiated in 2008 by the Bush administration. And that was always the plan, we had promised them that we would respect their sovereignty.”

Indeed, while Republican candidates now treat this departure as a failure—Jeb Bush proclaimed “that premature withdrawal was the fatal error”—attempting to stay would have been much worse. Washington would have had leverage only by threatening to withdraw its garrison, which the Maliki government desired. U.S. troops would have had little impact on Iraqi political developments, unless augmented and deployed in anti-insurgency operations, which Americans did not support. And a continuing military occupation would have provided radicals from every sectarian viewpoint with a target.

In short, but for the Bush administration’s decision to blow up Iraq there would have been no Islamic State rampaging through a chaotic Mesopotamia. The invasion was the critical mistake. The botched occupation compounded that initial error. Even by the GOP presidential contenders’ own flawed standard—failing to maintain an Iraqi troop presence—President Bush is most responsible for the ISIS deluge.

The Obama administration has played a malign, but secondary, role. Like its predecessor it also intervened too much rather than too little. For instance, President Obama continued to back Iraq’s Maliki government despite the latter’s sectarian excesses. That commitment left Washington with little leverage to press ruling Shia politicians to make concessions to disaffected Sunnis. Keeping a few troops on station against the Iraqis’ would have changed little—after all, the Bush administration failed to transform the Baghdad government when tens of thousands of American soldiers that were fighting on its behalf in Iraq.

In Syria Washington inadvertently discouraged a negotiated compromise between Bashar al-Assad and the peaceful opposition by insisting on the former’s departure. That convinced some regime opponents that the U.S. would force Assad’s ouster, precluding need for compromise which might have ended or at least limited the conflict early.

Then the administration apparently rejected a Russian initiative to ease Assad out of power. The Guardian recently reported that former Finnish president Martti Ahtisarri held talks in February 2012 with representatives of the UN Security Council’s permanent members, during which Moscow proposed Assad’s departure as part of peace talks. However, Washington, along with France and Great Britain, believed Assad was destined to fall and rejected Moscow’s initiative. At the time an estimated 7500 Syrians had died in the conflict, compared to the current death toll approaching a quarter million. Said Ahtisaari, “It was an opportunity lost.”

President Obama also put U.S. credibility on the line by making ISIS’s sectarian war in Iraq and Syria America’s own, without committing sufficient forces to do much more than contain the Islamic State. The Obama administration became a source of weapons for the Islamic State after “moderate” insurgents backed by Washington repeatedly surrendered both personnel and arms to more radical forces. Ironically, one of the most effective Islamic state commanders, Abu Omar al-Shishani, had been trained by the U.S. as a member of the Georgian special forces. Two years ago he joined ISIS and has played a leading role in organizing attacks on the U.S.-supported Free Syrian Army.

Unfortunately, inadvertently promoting war rather than peace did not begin with the George W. Bush administration. In March 1992 Britain’s Lord Peter Carrington and Portugal’s European Commission mediator Jose Cutileiro helped forge a compromise promising extensive regional autonomy among Bosnian ethnic leaders Croat Mate Boban, Muslim Alija Izetbegovic, and Serb Radovan Karadzic. However, after U.S. ambassador to Yugoslavia Warren Zimmerman met Izetbegovic the latter abandoned what became known as the Lisbon Agreement. Zimmerman denied offering U.S. support for Bosnia’s independence, but no one believes that he encouraged compromise. Cutileiro later complained that “President Izetbegovic and his aides were encouraged to scupper that deal and to fight for a unitary Bosnian state by well-meaning outsiders who thought they knew better.” Had the agreement been implemented, the worst of the Yugoslav civil war might have been avoided and tens of thousands of people might have lived.

It is impossible to ignore the tragedy now overwhelming the Middle East. Washington bears substantial responsibility for the catastrophic conflict. Although President Barack Obama shares the blame, George W. Bush made the most important decisions leading to the destruction of Iraq and rise of ISIL. No candidate unable or unwilling to learn from their disastrous mistakes is qualified to sit in the Oval Office.