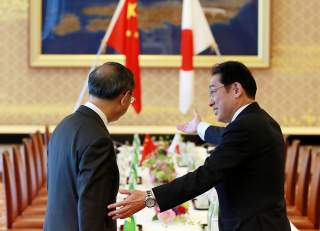 Are Japan-China relations beginning to improve? Recent developments have led some observers to conclude that is the case, but the future of bilateral relations remains hazy. The G20 Leaders Summit in Germany this week will likely provide an important indication of where the relationship is headed over the near- to medium-term.

Optimists point to several events and statements that seem to augur well for improved Japan-China relations. For example, a high-level Japanese delegation led by Toshihiro Nikai, the Secretary General of the ruling Liberal Democratic Party, visited China in mid-May and delivered a personal letter from Prime Minister Shinzo Abe to President Xi Jinping. The letter reportedly focused on working more closely with China on North Korea’s denuclearization and on the potential for Japan’s cooperation with the One Belt One Road (OBOR) initiative, a series of ambitious infrastructure projects designed to link China more closely to the rest of Asia, the Middle East, Africa and Europe.

At the end of May, China's top diplomat and one of the country’s five State Councilors, Yang Jiechi, visited Tokyo for discussions with Prime Minister Abe, Foreign Minister Fumio Kishida and National Security Advisor Shotaro Yachi. The Yang-Yachi meeting lasted five hours and, according to news reports, included discussions about scheduling bilateral summit meetings between the leaders of the two countries going forward.

The prime minister followed with a speech on June 5 in which he adopted a somewhat more positive tone toward the OBOR initiative, calling it a “landmark” development and offering cooperation. However, in that speech, he also noted the need for transparency and fairness before moving ahead with Japanese cooperation.

In mid-June, in response to Abe’s remarks, Vice Premier Wang Yang told a group of visiting Japanese business leaders that he believed Japan would cooperate more on OBOR—taking care to ignore the prime minister’s caveats.

Meanwhile, though the two countries have widely differing views of North Korea, neither side wants to see Pyongyang develop nuclear-tipped missiles, a capability that the Kim Jong-un regime seeks. As North Korea gets ever closer to achieving that aim, Beijing and Tokyo’s interests in stopping Pyongyang’s advances have come into closer alignment.

The U.S. withdrawal from the Trans-Pacific Partnership (TPP), which was to have been led by Japan and the United States as the two dominant TPP economies, has also left a vacuum in trade and economic leadership in the Asia Pacific that China is only too eager to fill. In addition to OBOR and the Asian Infrastructure Investment Bank—which China created to finance some of OBOR’s major projects—Beijing seeks to complete a Regional Comprehensive Economic Partnership in Asia that will include Japan and exclude the United States.

Next year will mark the fortieth anniversary of the signing of the Treaty of Peace and Friendship between Japan and China. In the previous commemorative years of 1998 and 2008, Chinese Presidents Jiang Zemin and Hu Jintao visited Tokyo and played up positive aspects of bilateral ties. Given those precedents and discussions on a summit in 2018, there is a growing expectation in Japan that a trip by President Xi will take place.

In order to schedule a summit and ensure its success, Beijing will need to moderate its more provocative behavior toward Japan, at least for the time being. Moreover, China seems to believe that if it offers a more benign face to Japan, Beijing can, over time, weaken Tokyo’s commitment to the U.S.-Japan alliance.

All the recent developments have led some observers to suggest that relations between Japan and China are warming. Yet, tensions between the two countries over the Senkakus have not diminished and remain a significant obstacle to closer ties. Indeed, in May, the Japan Coast Guard (JCG) detected ninety-four official Chinese boats in the islands’ contiguous waters over twenty-four days, and twelve such vessels over three days in Japan’s territorial waters. The numbers roughly correspond to those of May 2016 when ninety-seven Chinese boats over twenty-eight days sailed in contiguous waters and eleven boats over three days sailed in Japan’s territorial waters. Prime Minister Abe’s actions in response to these provocations have not diminished. Among other steps, he has increased the JCG’s budget by 10 percent this year with about half of the increase directed at building new large patrol boats for deployment in the waters near the Senkakus.

Moreover, Tokyo fully understands Beijing’s view of relations among China, Japan and the United States as a zero-sum game. Yet, Japan is as determined as the United States to maintain and enhance the U.S.-Japan security alliance regardless of the direction Japan-China relations take.

Whether Japan-China relations improve in coming months and years remains an open question. The chemistry that prevails between Xi Jinping and Shinzo Abe and the results they achieve this week in Germany may provide some preliminary answers.