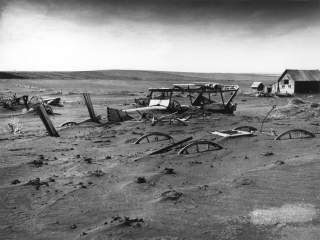 Or the banks stop before this point is reached, voluntarily renounce further credit expansion, and thus bring about the crisis. The depression follows in both instances. (emphasis added)

Although it would be the wiser policy, there is no evidence that the world’s central bankers have the wisdom, either individually or collectively, to select the second alternative. More specifically, they lack “the courage to act” (as Ben Bernanke’s recent, self-congratulatory memoir was so ironically titled); they and their political, big finance and big business cronies are afraid to swallow the “d-pill”, the economic medicine named “depression”.

A good, old-fashioned, pre-1929 depression (like the short-lived, eleven-month depression in 1920-1921, before the days of “modern” central banking and “enlightened” Keynesian intervention “cures”) is the only tonic that can clear out the malinvestment built up since the beginning of the fiat money era. That era began in August of 1971. That is when Richard Nixon, informed that U.S. gold reserves were precipitously declining as a result of President Johnson’s March 1968 action to reduce the gold reserve ratio from 25 percent to zero, “temporarily” suspended the convertibility of the U.S. Dollar into gold. That “temporary” measure has been in effect for forty-five years.

Finally freed from the constraints of what they could not print (i.e., gold), central bankers and their cronies in government, finance and big business were given a license to debase all formerly hard currencies. (Such currencies were “hard”, as they were linked, via the Bretton Woods arrangement, to the dollar, which was backed by gold.) And debase they did: they replaced real investment capital (i.e. actual savings) with cheap, invented credit; they replaced market-derived price (of money) discovery, i.e., market-derived interest rates, with central-bank-proclaimed interest rates.

That nearly $12 trillion total includes $3.2 trillion of short-term sovereign debt and $8.5 trillion of long-term sovereign debt. The total NIRP debt is up $1.3 trillion from the end of May. Even more astounding is that the total amount of negative-yielding debt with maturities of seven years or longer has ballooned to $2.6 trillion. That is nearly double just since April of this year. In fact, all of the debt issued by the Swiss government - every borrowed franc, even Swiss fifty-year bonds - now carries a negative yield. All of the debt issued by the Japanese government (JGBs) with maturities up to twenty years now carries a negative yield.

Imagine lending money to anyone, even the Swiss government, for fifty years, ultimately getting back less than you loaned … and paying for the privilege! What such an investor has to believe, in order to make such a loan, is that inflation over the next fifty years will be substantially negative (i.e., a great, and long-lasting deflation), with the result that the purchasing power of the Swissie will increase substantially over the next fifty years. But every major currency on the planet, including the US dollar, the British pound, the Japanese yen and the Euro/DM, has lost purchasing power over the last forty-five years (since the end of Bretton Woods).

Without some form of scarce commodity backing (e.g., precious metals) for currencies, why would anyone, particularly sovereign bond investors, believe that currency units, which can be conjured at will from thin air (not a scarce commodity) by desperate governments, will be worth more, not less, over the next fifty years? But believe it they do, proving that, at least with respect to high finance (better named low-IQ finance?), you can fool all of the people (the investment public) all of the time.

NIRP simply never could exist in a real-money world, where credit, like all commodities, is scarce and must be rationed by the market. But European Central Bank chief Mario Draghi, with the implicit and explicit assent of all the world’s central bankers and the urging of their cronies in government, finance and big business who get “first crack” at the conjured money, has reiterated over and over that there would be “no limits” to what he and the ECB might do with respect to printing money and further reducing interest rates. (No wonder the workaday citizens of Great Britain voted overwhelmingly for Leave.)

But the central bankers’ ability to defy economic gravity may, at long last, be coming to an end. Even the radical Keynesian, Richard Koo has recognized the outrage of NIRP, which he recently described as “an act of desperation born out of despair over the inability of quantitative easing and inflation targeting to produce the desired results… the failure of monetary easing symbolizes crisis in macroeconomics."

The failure of ZIRP, QE and now NIRP is easy to see from recent corporate earnings reports and associated PE multiples: As of close of trading on Friday, July 1, 2016, the S&P 500 was trading at 24.3 times earnings over the last twelve months, close to an historical record high PE multiple. Generally (meaning before fiat money), elevated PE multiples were notched during times of increasing earnings. But for the first fiscal quarter of 2016 (FQE 3/31), S&P 500 earnings per share were only $87. That is 18 percent less than the $106-per-share earnings peak reported for the third quarter (FQE 9/30) of 2014. If money printing and central-bank-dictated interest rates were the saviors of the real economy, and if the United States were actually experiencing a real economic recovery, corporate earnings would be increasing, not declining precipitously.

Interestingly, the first quarter 2016’s $87 per share earnings were eerily equivalent to the $85 earnings per share for the last twelve months just preceding the 2008 crash. And the S&P 500 multiple was only 18.4 at that time. So stocks have a long way to fall from their elevated current levels, levels only reached as a result of share buybacks (artificially increasing earnings per outstanding share and increasing per share prices), which buybacks were (and continue to be) fueled by relentless near-ZIRP maintained by the U.S. Federal Reserve, as well as so-called “carry-trade” borrowings in currencies with NIRP (such as the Japanese yen).

The failure of ZIRP, QE and now NIRP also is easy to see from recent corporate sales reports: According to the most recently updated Inventories to Sales Ratio compiled by the Federal Reserve Bank of St. Louis, the inventory to sales ratio is hovering at 1.35, just below the highest recorded (1.41 in January of 2009) in over twenty years. That ratio exploded higher (meaning unsold goods are piling up) every quarter since the end of the second quarter of 2014. If money printing and central bank-dictated interest rates were the saviors of the real economy, and if the United States were actually experiencing a real economic recovery, inventories would not be languishing unsold on the shelves of suppliers and merchants. Workers with higher pay checks would be consuming them.

Which brings us to perhaps the easiest way to understand the failure of ZIRP, QE and now NIRP: the labor market. Contrary to the claims of the Obama administration’s Bureau of Labor Statistics’ headline unemployment numbers (which counts job slots, so that a part-time gig is the equivalent of a forty-hour-per-week career job paying over $50,000 per year), there is not more work being done in America. There actually is less, as former full time jobs (with benefits) have been, and continue to be, replaced with more part-time, lower paying jobs (without benefits). Indeed, as former OMB chief David Stockman has instructed, the number of what can be called “breadwinner jobs”, which are jobs that can support a family of four, is now almost one million below the number of such jobs in the year 2000. If money printing and central bank-dictated interest rates were the saviors of the real economy, and if the United States were actually experiencing a real economic recovery, there would be more “breadwinner jobs” now than in 2000, when the population was considerably lower.

The crack-up boom, fueled by fiat money, QE, ZIRP and now NIRP, is coming. It will hit on a global scale, and “rock the casbah” (and all points north, south, east and west thereof). It will make the Great Depression look like a picnic party in the park. Why will it be worse? Consider just two simple facts: first, supply chains are much longer and considerably more intricate than eighty-five years ago. As they fail (due to bankruptcies and business failures of those in the chain), basic necessities will not get to those in need of them. Second, compared to eighty-five years ago, the world has billions more mouths to feed, and many fewer people, including millions fewer farmers, who actually know how to produce the basic necessities.

Yes, central bankers can print currency units, but not food, energy or other commodities necessary for sustaining life. As basic commodities become more scarce or are priced out of the reach of average folks, wars, riots, rebellions, diseases and repressive governments will result. All of this human suffering will be the progeny of ZIRP, QE and NIRP, which in turn are the progeny of the replacement of the gold standard by the Ph.D standard.