The Coming Drone Wars: A Headache in the Making for American Foreign Policy 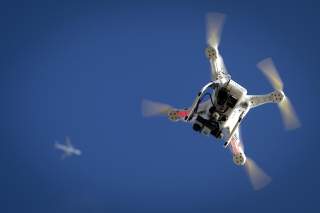 In June, the United States shot down two Iranian-made armed drones used by Bashar al-Assad’s regime in Syria. The fact that the shoot down (and the existence of the armed drones themselves) barely registered as a significant news event shows the extent to which drones are becoming a normal feature of international conflicts.

Drones are rapidly proliferating around the globe and are now in the hands of an increasing number of state and nonstate actors. The widespread availability of drones brings new challenges to international security. As more actors have access to drones, they are likely to use them in ways that challenge norms of sovereignty and change conflict dynamics. U.S. policymakers should begin thinking now about how to best prepare for these challenges and, to the extent possible, shape emerging patterns of behavior surrounding drone use.

Over ninety nations and many nonstate actors have drones today. One of the first things that people seem to do once they get ahold of drones is send them someplace they don’t belong. With no person on board, actors can send a drone into hostile areas with fewer costs if it is shot down. Often, the result is that others do fire on drones. Again, because there is no person on board, the threshold for shooting down others’ drones is also lower.

One of the first international incidents using this technology occurred in September 2013 when China sent a drone into contested airspace over the Senkaku Islands in the East China Sea. Both China and Japan claim sovereignty over the islands, and a drone was a low-cost way for Beijing to challenge Tokyo. In response to the incursion, Japan scrambled an inhabited (“manned”) F-15 fighter jet to intercept the drone. The Chinese drone turned and left, but afterwards Japan issued new rules of engagement that Tokyo would be more willing to shoot down a drone than a manned aircraft. China fired back that the shoot down of any of its drones would be “an act of war.”

Since then, numerous actors have used drones as a low-cost way of challenging sovereign or contested areas—and often times they are shot down. Hamas and Hezbollah have sent drones into Israeli airspace and were shot down by the Israeli air force. In 2015, Assad’s regime was reportedly able to down a U.S. Predator drone in western Syria. Later that year, Turkey shot down a suspected Russian drone that had penetrated Turkish airspace near Syria. In 2016, Pakistan shot down a small quadcopter in the disputed Kashmir region that it claimed was an Indian drone (India denied the claim). Most recently in June, the United States shot down the two pro-regime drones in Syria. With the exception of the most recent case in Syria, in which the United States also shot down a manned Syrian Su-22 fighter, these incidents show a pattern of countries that are willing to put drones in risky situations and adversaries that are more willing to shoot them down than human-inhabited aircraft.

As part of the Center for a New American Security’s Proliferated Drones project, we conducted a survey experiment to test this theory among three different populations: U.S. elites who were familiar with drones, the U.S. general public and the Indian general public. Across all three groups we found that respondents were more willing to put drones in harm’s way and more willing to shoot down adversary drones than inhabited aircraft in similar situations. Most interestingly, we also found that survey respondents generally saw shooting down a drone as less-escalatory than shooting down an inhabited aircraft. This may explain why many of these incidents have not escalated further.

A similar incident in another domain sheds further light on how countries treat uninhabited vehicles differently than human-inhabited ones. When Beijing seized an undersea drone in the South China Sea in December 2016, the United States and China quickly resolved the incident, the drone being returned and Washington shrugging off the affair. This is a stark contrast to how the United States and China handled the 2001 crisis sparked by the accidental mid-air collision of a U.S. Navy EP-3 plane and a Chinese fighter. After the EP-3 made an emergency landing in China, Beijing insisted on a formal written apology from the president before releasing the crew and plane.

The emerging pattern of behavior of states for how they treat uninhabited systems—both their use and actions against them—suggests that they appear to occupy a new rung on the escalation ladder. The use of drones and attacks on them do not appear to carry the same weight in a crisis if there are no lives at stake. Whether actions against drones prove to be an escape valve for tensions or a route towards further escalation remains to be seen. Early signs point to these incidents not escalating further. Because sovereignty has been clear in many instances, countries’ responses may have been simplified. When country A flies a drone into country B’s territory and it promptly gets shot down, it’s hard for country A to respond with righteous indignation. Responses may be more complicated in regions where sovereignty is contested.

New technologies are often met with claims that they are changing the character of warfare or even the nature of war itself, and drones are a particularly sensationalized technology. In some cases, technologies disrupt warfare in profound ways, and advanced robotic systems certainly could lead to significant shifts in how militaries fight. We are already seeing drones complicate crisis escalation dynamics, particularly in gray zone conflicts.

There is to a degree over-hype surrounding drones, with many defense analysts dismissing them as insignificant from a traditional military standpoint relative to fighter aircraft. This perspective undervalues how drones’ unique attributes change how nations might choose to use them. Drones place new tools in the hands of state and nonstate actors, which they will use in novel ways, and it is important for strategists not to fall into the trap of expecting other nations to use drones the same as the United States.

Drones don’t change the fundamental nature of the political-military brinksmanship nations conduct in many areas around the globe, but they are a novel ingredient being added to the simmering pot of gray zone conflicts. Their most significant contribution may be the fact that they add an element of uncertainty into already ambiguous situations, precisely because they are new and patterns of behavior related to their use are still emerging. One country might expect another to treat a shoot down of their drone as not very significant, but what if they don’t see it that way? Another country might see shooting down a drone as sending a strong signal of their willingness to escalate, but what if the signal is not interpreted that way? The chief risk drones pose to policymakers in crisis situations is not the military capability they enable, per se, but the risk of miscalculation they pose because of the ambiguity surrounding actions using uninhabited vehicles. Does sending a drone into a contested area signal commitment, or does it signal a lack of commitment because a nation wasn’t willing to risk sending a person?

Psychology tells us that humans are subject to cognitive biases where they incorrectly project their own views onto others and even onto their future selves. Policymakers should conduct tabletop exercises and war games simulating crises and gray zone conflicts involving drones to help them anticipate how adversaries might react and even how their own preferences might evolve in the midst of a crisis. We are fast entering a drone-saturated world, and policymakers should move quickly to understand the challenges ahead.

Paul Scharre is a senior fellow and Director of the Technology and National Security Program at the Center for a New American Security (CNAS). He is co-author of the recent CNAS report “Drone Proliferation: Policy Choices for the Trump Administration.”

Image: An airplane flies over a drone during the Polar Bear Plunge on Coney Island in the Brooklyn borough of New York January 1, 2015. The Coney Island Polar Bear Club is one of the oldest winter bathing organizations in the United States and holds a New Year's Day plunge every year. REUTERS/Carlo Allegri