The Coming Gulf War: Qatar vs. Everyone 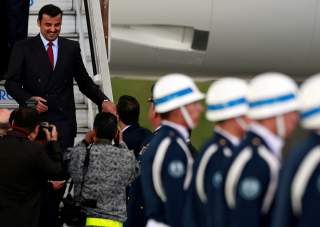 It was against this background that the Trump administration assumed power and reinvigorated American-Saudi ties, with the objective of rolling back Iranian influence in the Middle East and defeating the Islamic State. The administration accused Iran of being the “world’s leading state of terrorism and is responsible for intensifying multiple conflicts and undermining U.S. interests.” Arguably, President Donald Trump’s vocal assertion during his recent visit to the Kingdom to cooperate and strengthen Saudi military role in the region mainly as a counterbalance to that of Iran was short-sighted and naïve.

As I wrote on these pages, certainly, United States should address all threats posed by Iran. Nevertheless, United States cannot address those threats by oversimplifying the context and background against which Iran carries out its spoiler regional role. True, Iran has had a deleterious role in Yemen, Syria, Iraq, Lebanon and Bahrain; yet its role cannot be looked upon in isolation from Saudi Arabia’s policies in those countries. Notwithstanding Saudi Arabia’s embrace of the fundamentalist Wahhabi-Salafi creed whose theological and political ramifications cannot be discounted as principal factors for paving the way for Islamic radicalism, United States has supported Saudi policy on Yemen by espousing an oversimplified view of Iran’s intervention in Yemen. In much the same breath, United States has embraced an ill-informed position regarding the ongoing crisis between Qatar and Saudi Arabia.

Washington, instead of addressing the crisis as an opportunity to help Qatar regulate its relationship with Iran and Islamists, has embraced a mixed and confusing position. On the one hand, President Trump implicated Qatar with funding terrorists; and on the other, Secretary of State Rex Tillerson has tried to tone down the crisis. He recently stated: “We believe our allies and partners are stronger when they are working together towards one goal which we all agree is stopping terrorism and countering extremism.”

Coming on the heels of Washington’s strong support of the Kingdom, this confusing U.S. position has only served to harden Saudi Arabia’s longstanding drive to control Qatar and, by extension, to subdue any dissent to its policy in the Arab Gulf. The early manifestations of this Saudi drive emerged with hastening the appointment of deputy crown prince Muhammad bin Salman al-Saud as the heir to the throne. Growing weaker by the day, King Salman has vested the overall interest and ambitions of the Kingdom in his young and spirited son. Resembled by some to the “founding father” of the Kingdom, Crown Prince Muhammad has taken on his shoulder the responsibility of curbing Iranian regional projection of power, defeating Salafi-jihadi organizations Al Qaeda and the Islamic State, reducing the societal influence of the Wahhabi religious establishment in the Kingdom, and bringing into line all dissenting voices in the Arabian Peninsula.

Apparently, the Crown Prince wants to continue where his grandfather (and other relatives) had left off: Complete domination of the Arabian Peninsula under the banner of pliable Wahhabism and Saudi leadership. This is clearly reflected by the list of ultimatum delivered to Qatar, which is tantamount to turning Qatar into a Saudi vassal state.

It’s hardly possible for any sovereign country to submit to such unreasonable demands. For example, besides asking Qatar to reduce its diplomatic representation and restrict its commerce with Iran, it is called upon to close the Turkish military base in the country and stop all military cooperation with Turkey inside Qatar; shutter Al Jazeera and its affiliates; pay compensation to victims, material losses including lost income due to Qatar’s foreign policy in the past; and to align itself with the GCC and Arab countries in all issues in ways that protects the national security of the GCC and Arab countries.

If history is any indication, Qatari rulers, short of an outright invasion of their country, would not comply with Saudi ultimatum and would seek help from multiple sources. Whereas today Iran and Turkey have stood with Qatar, Russia and China may be next in line to stand by the small sheikhdom and therefore enhance their presence in the Gulf. Conversely, Saudi Arabia will have no other choice to bring Qatar to its knees than threatening to invade the small sheikhdom.

Going beyond battling terrorism, the current crisis has its roots in the past, and has been exacerbated by a wishful thinking of reviving Saudi-Wahabbi hegemonic aspirations, thanks in no small measure to an American foreign policy ill-informed of the history, ambitions and contradictions of Arab rulers and politics.

Washington should take a firm and non-ambivalent position regarding the conflict between Qatar and Saudi Arabia, grounded in securing Doha from Riyadh’s aspiration of hegemony and protecting Riyadh from Doha’s adverse policies. Otherwise, Washington should not be surprised by more foreign intervention in the Gulf and/or another Gulf War.

Robert G. Rabil is a professor of political science at Florida Atlantic University. He is the author of Embattled Neighbors: Syria, Israel and Lebanon; Syria, United States and the War on Terror in the Middle East; Religion, National Identity and Confessional Politics in Lebanon: The Challenge of Islamism; Salafism in Lebanon: From Apoliticism to Transnational Jihadism; and most recently The Syrian Refugee Crisis in Lebanon: The Double Tragedy of Refugees and Impacted Host Communities. He tweets at @robertgrabil.