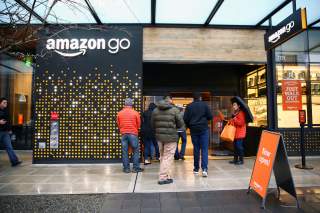 Job creation was strong during the first year of Donald Trump’s presidency, and the administration has taken credit for it, heralding it as a first step toward “Making America Great Again.” However, underneath the surface of a surging labor market, there is a problem: retail employment.

Amazon recently unveiled “Amazon Go,” a concept store where there are no cashiers. Technology has eliminated the need for human cashiers, and Amazon is simply the first to begin employing these improvements in this manner. First the company came for the brick and mortar sales, now it is coming for the employees. Granted, this is not a new phenomenon, but it may be accelerating the downturn.

A store without cashiers and salespeople illustrates how quickly 5 percent of the U.S. labor force can be eliminated, seemingly without a second thought. The Bureau of Labor Statistics’ (BLS) figures on the “retail trade” industry consists of numerous occupations, some of which do not immediately seem to make much sense being lumped together. Pharmacy technicians and automotive mechanics are lumped in with retail salespersons and cashiers, for example. Nonetheless, the last occupation specific data that the BLS released, in May 2016, revealed that the two largest retail trade occupations by employment were retail salespersons and cashiers, accounting for more than seven million jobs and 45 percent of the retail trade employment—that’s roughly 5 percent of all jobs.

Imagine the possibilities when companies like Walmart, Kroger, Home Depot and Target begin to implement similar cashier-less technology. All are top ten employers in the United States. Will they be in ten years? Probably not.

Certainly not—especially if shareholders have anything to do with it. Employees are expensive; constantly in need health care, wage increases or both. Technology is expensive only once, and merely needs software upgrades. The potential to increase margins will be too tempting for retail giants attempting to both keep pace with Amazon and satisfy shareholders. If this sounds familiar, it’s because it already happened to the U.S. manufacturing industry. In the 1950s, more than 30 percent of the American workforce manufactured goods.

Today, while producing more goods than ever, that figure is 8.5 percent. The decline has been relentlessly steady as manufacturing productivity soared and the composition of the U.S. economy has shifted. According to BLS data, manufacturing employment increased by 1.5 percent in 2017 to new post-crisis highs. With 12.5 million people working in the industry today, manufacturing employment remains at levels last seen during recessions in the 1940s.

Manufacturing was a relatively high paying job sector that required a high school education but not necessarily anything beyond that. It provided relatively easy access the American middle class, something that was difficult to do otherwise without a college diploma.

Similarly, in the 1980s and 1990s, malls and shopping centers were popping up everywhere. American consumerism was moving ahead in full force, and it was creating retail jobs that didn’t require the highest educational standards. Now, BLS data show that retail trade employment topped out in January of 2017. The only other major industry to see a decline in the past year was the inappropriately labeled information industry, which includes publishing and other industries in decline. In the midst of a labor surge, retail employment is in decline alongside the likes of newspapers.

The crux of the matter is that the productivity juggernaut that struck manufacturing and allowed the United States to make more stuff with fewer people is coming to retail. There will be fewer jobs, but retailers will sell ever more products.

Retail is the Trump jobs crisis. The president has already singled out Amazon for not paying the postal service enough to ship things. When retail jobs begin to disappear with vigor, the possibility of regulation and stronger oversight might be too tempting.

It is easy to point the finger at the evils of globalization in the context of the collapse in manufacturing jobs. President Trump has used some exceedingly harsh rhetoric to describe countries with whom the United States has a significant trade deficit. China, a primary target of president, benefited tremendously from America’s offshoring of manufacturing because of cheap wages.

But, for all the turbulence wrought by globalization, the gutting of retail jobs will not be done by low wage pressures from abroad. It will be done by innovation and technology at home—good, old fashioned American ingenuity.