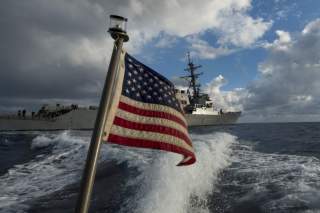 Where does this all leave us? Doing some comparisons to avoid the pitfalls of the past, I hope. Here’s a parallel, and a nettlesome one: both intellectual revolutions-that-weren’t—post–World War II and post–Cold War—came after the sea services won so big that they deprived themselves of peer rivals. Strategic drift ensued. It took a quarter-century after the Japanese surrender—along with the rise of a globe-spanning Soviet Navy and a debacle in Vietnam—to precipitate the Turner revolution. It’s been a quarter-century since the Cold War, and the fleet has suffered no defeat to furnish a catalyst. Can the navy leadership nurture a revolution through conscious action rather than being driven to it by some visceral trauma?

The challenge before the Naval War College and the U.S. Navy, then, is to answer that question yes. Let’s make Admiral Richardson’s fourth revolution more like the interwar age of girding for the next big thing—and less like the funk following World War II and the Cold War.

James Holmes is Professor of Strategy at the Naval War College. He filed this from the International Seapower Symposium in Busan, South Korea. The views voiced here are his alone.