The Congressional Battle Over Ending the War In Yemen 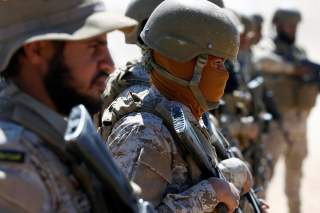 A new effort is underway on the Hill to end U.S. involvement in Yemen. There’s a verve and kick to this campaign, and a robust rolodex of Congressional sponsors and media backers.

When I asked, congressional aides who huddled with reporters in Sen. Mike Lee’s office last week wouldn’t elaborate on conversations they’ve had with the White House on a new measure that would force a vote on whether U.S. should and can continue to support Riyadh.

Privately, some White House aides have reservations about how closely the administration held hands with the Kingdom’s brass in 2017, including literally, on the now famous-trip to the country that featured a sword dance, a gold medallion and a flashing orb.

But it is telling that the administration is aware of the measure, sponsored by Lee, Bernie Sanders and Chris Murphy, and at least, as yet, is not publicly lashing out against it.

Indicators abound that Saudi Arabia, and its pointman the Crown Prince Mohammed Bin Salman, have lost some steam from the high-water mark of the early part of the Trump administration, when the White House embraced the Saudis wholeheartedly.

Since then, the administration has, quietly but publicly, admonished the Saudis and has intervened diplomatically to attempt to assure crucial aid is delivered in Yemen.

It’s telling that Lee is working with Bernie Sanders and Chris Murphy, two Democrats almost certainly running for president. “Lee hates McConnell more than anyone,” a source familiar with the matter told me, referring to the majority leader, Mitch McConnell.

Murphy, who is attempting to build a national profile, is pitching a pro-State Department, anti-war (but tough on Moscow) platform, and working with former Secretary of State Madeleine Albright. He’s complained of a “neutered” State Department under Rex Tillerson to me. Sanders has staked out similar ground, in particular, in a speech in Missouri last year where Winston Churchill once gave his “Iron Curtain” address.

The obvious hurdle is the majority leader, who is quite suspicious of Lee and of clampdowns on presidential authority, generally.

But a veteran anti-war activist and journalist involved in the effort sees currents at play bigger than McConnell. The country is “so acutely split right now. … You have the people at Breitbart, at FreedomWorks, who are supporting this effort,” he told me, while noting the center-left has become more “neoconservative.” He said I would be remiss to mention that Friday is the national call-in day against the war: “This is great, we have CODEPINK and FreedomWorks on the same side.”

And indeed, to monitor Breitbart’s coverage of this has been a marvel. The allegedly hard right website is covering the Sanders-Lee-Murphy antiwar movement with as much vigor -- and support -- as any outlet on the internet.

Washington Political Editor Matthew Boyle hails a “bipartisan populist coalition” that is “energized” to end the “illegal” U.S. involvement in the war. In age of the neo-Buchananite White House, Boyle writes (in an extraordinarily lengthy piece): “Rolling back unwarranted U.S. participation in unpopular foreign wars is actually a very popular position, part of Pat Buchanan’s view of conservatism that has evolved into President Donald Trump’s economic nationalism,” a favorite term of former White House Chief Strategist and Breitbart chairman Steve Bannon. “We're going fullbore” on this, a source in the company tells me.

The idea, says supporters on the Hill and outside of it, is to force defenders of the war to defend the status quo. Former State Department officials have long complained of a sinister origin of the U.S. support for the coalition: after the Obama administration inked the Iran deal, there was considerable consternation Washington was pivoting toward Tehran (something Obama denied)-- the Saudis made the Yemen effort a put-up or shut-up moment. Obama White House alums deny that narrative.

But there is a potential trump card for supporters if persuasion doesn’t work: prove the war is illegal. “There is bicameral, bipartisan support over the executive derailment of constitutionally-enshrined authorities,” said one activist working closely with the Senators, referring to Congress’ authority to declare war.

Also key is that this measure is not targeted at Trump: both Democratic and Republican administrations have overseen the effort, and U.S. support for war was, of course, inaugurated under the former. “It’s about doing the right thing together,” a senior aide to Sanders told reporters last week.

So, as President Trump prepares to potentially meet with North Korean leader Kim Jong Un, is it possible his White House, behind the scenes, is interested in simultaneously unwinding the U.S. from another conflict? Jacob Heilbrunn, editor of the National Interest, floats Trump for the Nobel Peace Prize in today’s London Spectator. Could it be that Trump, frequently castigated by the left as a warmonger, really wants to create peace in our time?