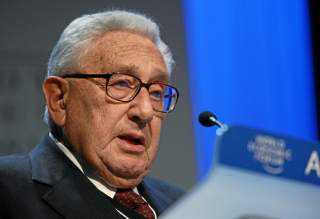 We've got, as you can see, Henry Kissinger. To make a very long story short, Henry is the preeminent scholar-practitioner of his era. And I would date the era essentially the post-World War II era, which is another way of saying roughly over the last seventy years, I believe that Henry combines scholarship, as well as ability to be effective in government. And when you add them up, I believe he stands apart from anyone else who has served over this three-quarters of a century.

Twenty-one days later, a jury headed by Foreign Affairs editor Gideon Rose announced that the Council was awarding the 2014 Arthur Ross prize for the best book on international relations to Princeton University professor Gary J. Bass for his book The Blood Telegram, which denounces Kissinger as a racist who connived at genocide in Pakistan. (The Council describes the jury, which included Stephen Walt and Robert Kagan, among others, as an independent one.) Kissinger, who is honorary chairman of the National Interest, and Richard Nixon, Bass says, employed a “farrago of distortions, half-truths, and outright lies about their policy toward the Bengali atrocities.” In the New York Times he added that Kissinger and Nixon “vigorously supported the killers and tormentors of a generation of Bangladeshis.” And, writing in Politico in January to defend his book from a critical review by Robert Blackwill in the National Interest, Bass asked, “Can we please stop already with the tributes to Henry Kissinger?”

If taken literally, Bass’ claims and conclusions would require the Council to abolish its Kissinger chair, which is held by Blackwill, and to decry its decades-long association with him.

The award offers the starkest sign yet of the extent to which the Council has morphed, from a redoubt of the Northeastern establishment, into a diffuse organization. In its original incarnation, the Council consisted of a few hundred leading Northeastern bankers and lawyers. It was a cloistered club but its members, whatever their shortcomings, were not parochial thinkers. They believe in public service and the national interest. Today, the Council numbers several thousand members and represents a multiplicity of views on a welter of topics.

Founded in 1921, the Council was the successor to an organization called The Inquiry that was led by Walter Lippmann in New York during World War I to help determine postwar borders. The Council was formed to give permanent expression to its efforts to ensure American engagement with the outside world. It consisted of an elite group of diplomats, financiers, generals, and lawyers, who, according to the Council’s founding charter, were supposed to constitute “a continuous conference on international questions affecting the United States, by bringing together experts on statecraft, finance, industry, education, and science.”

It wasn’t always easy for Kissinger to enter these Brahmin circles. He himself often complained about some of the attitudes he encountered among the patrician WASP elite; specifically, he noted of George McBundy, whom he served as an advisor to during the Kennedy administration, in his memoirs, “He tended to treat me with the combination of politeness and subconscious condescension that upper-class Bostonians reserve for people of, by New England standards, exotic backgrounds and excessively intense personal style.” But Kissinger came to be widely viewed as the Council’s most important and visible voice. As an advisor to Nelson Rockefeller and the author of groundbreaking works such as Nuclear Weapons and Foreign Policy, which was published by the Council, he enjoyed a unique visibility in foreign policy debates, which is why Nixon tapped him to become his national security adviser in 1968.

In the years since Kissinger rose to prominence, change has come in fitful lurches at the Council, at least initially: the matter of allowing women into the Council seems to have been met with the most opposition. According to Peter Grose, author of the official history of CFR, when the prospect of inviting women to join was raised by some members in the 1960s, it was quickly shot down. One member of the Council asked, “If you let one woman in, how can we keep our wives out?” The issue was shelved. Women were not admitted into the Council until 1971.

Since then, though, the Council has gone into overdrive to rebrand itself. If the small CFR had a clubby feel, it’s also the case that the level of discussion was high. It was a club but an exclusive one that prized achievement and insight. Dean Acheson, George F. Kennan and others were men of rare abilities. Today the CFR has expanded. The old, cloistered past is out. Diversity is in. The organization counts among its members celebrities like Michael Douglas, Angelina Jolie, and George Clooney, as well as Silicon Valley giants like Eric Schmidt. Not surprisingly, the CFR, as it is known, has much expanded the issue areas it covers. While it has always focused on economics to a larger degree than many other foreign policy institutions, in the 1980s it began exploring issues like international humanitarian disasters, demography, human rights and “reducing global inequities.” Much like U.S. foreign policy itself, the post-Cold War era has seen CFR’s areas of focus expand at a rapid rate to include things like global health, the environment, technology and science and culture and society.

Bass’ book fits well into these new areas of interest. It is also impassioned, well-written and densely researched. But his cri de coeur rests on the premise that Kissinger was guilty of the sin of omission rather than commission. It’s a rather open-ended indictment that could be applied to not a few statesmen. There will always be an audience for those interested in history as a morality tale. But that the Council would confer this award to the Blood Telegram amounts to a remarkable flight from its own history.