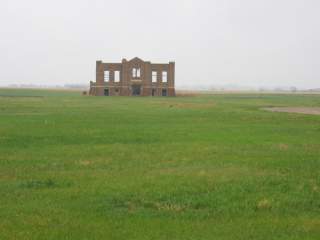 There was a minor kerfuffle in the press last week when reporters began picking through the academic writings of David Brat, the Virginian economics professor who bested House Majority Leader Eric Cantor in a Republican primary. Brat had written that “If you refuse to pay your taxes, you will lose. You will go to jail, and if you fight, you will lose. The government holds a monopoly on violence. Any law that we vote for is ultimately backed by the full force of our government and military.” That sentence, “The government holds a monopoly on violence,” was held up by a number of publications—the Wall Street Journal and the New York Daily News among them—as a sign that Brat was some sort of extremist. Of course, that phrase is actually a rather standard definition of a successful government: that there are no forces in the polity other than the government that use force in an organized manner. Governments without a monopoly on the use of force have trouble providing the basic social goods of government—security, order, some semblance of justice—or protecting their citizens’ rights.

French writer and entrepreneur Pascal-Emmanuel Gobry was dismayed by the media misread of Brat’s remark, seeing the failure of professional political reporters to recognize a basic political-science concept as symptomatic of a broad and dangerous trend. He writes:

In the understanding of both the great Ancient philosophers and, taking after them, of the thinkers who gave us the Enlightenment and the intellectual scaffolding for our prosperous liberal-democratic society, including the Founding Fathers, democracy did not simply happen. Democracy depended on a robust citizenship, and this citizenship, in turn, was a struggle of all the men (and, now, women) of the polity; it conferred rights as well as responsibilities. In particular, two of the most fundamental requirements of citizenship were virtue and a liberal education.

Liberal education, he says, “helps make us free” by showing us “not only the empirical scaffolding of our Universe–a.k.a. science–but also its conceptual scaffolding, a.k.a. the ideas, concepts and history which shape the world we live in.” Erode that education and you’re eroding freedom, citizenship and ultimately democracy itself. When the political elite doesn’t know politics, that’s a sign that liberal education is indeed being eroded. And Gobry suggests that the erosion is only going to continue as America retools its education system to produce more science and technology degrees: “Nobody stops to ask what education is for, because the answer is implicitly accepted by all: an education is for getting a job. It is, in other words, for being a cog in the giant machine of post-industrial capitalism. It is, in other words, for the opposite thing that our forefathers wanted for us.”

Gobry’s remark that “democracy did not simply happen” is an understatement. The concept of citizenship, and the concepts of virtue and liberal education that underpin it, rest upon a vast and unfathomably complex cultural structure. Liberal education, for example, cannot take root in a culture which is intolerant of dissent or suspicious of originality. Virtue will never be widespread in a culture that encourages license. There are tensions in the cultural structure, too—the same suspicion of originality that hinders liberal education might backstop virtue by resisting moral "innovation."

The delicate balances needed here are why democracies are so rare in human history. Those delicate cultural balances are contingent. Events may change them. A successful culture must be able to perpetuate itself in spite of events. And America’s cultural structure isn’t being passed on. A Pew study of millennials last March found that we are less patriotic, less religious, less trusting, less loyal to organized political parties and less likely to be married. As I wrote at the time, “America is currently experiencing a social rupture, one in which old beliefs, old traditions, old ways of life are being abandoned en masse, and in which the communities and institutions associated with the old ways no longer command popular loyalty.” I suggested that this was likely to lead to a growth of the state as cultural sources of social support fade. If Gobry is right that the intellectual foundations of democracy are also fading, that bigger state will raise the stakes of American politics and deepen the divisions in the American polity.

Some might counter that American democracy has extremely deep roots, that we’ve proven ourselves remarkably resilient against prior malaises like fascism, Communism and (going way back) Jacobinism. Conservative thought on social decay has a strain that suggests societies can rebound. People return to old cultural touchstones when new ways cause suffering. There’s certainly some truth in this. The death of God, for example, gets proclaimed about every eighty years or so, only for religion to come surging back. Yet a closer look reveals that things weren’t quite the same. In the Middle East, secular Ataturks and Nassers were indeed replaced by more religious leaders. But these leaders have been mere corruptions of the old form—Erdogan a thief, Morsi an incompetent, Khamenei a sham. They aren’t exactly the true heirs of the Golden Age of Islam. It’s a similar story in the West: the religious resurgence was hardly a restoration of the glory of old. They’re putting churches in strip malls now.

Cultural structures, then, don’t always snap back, good as new, when bent. Something is lost. People forget the intricacies when rebuilding from memory. And the singular degree of intergenerational alienation we see today would suggest that the next American cultural restoration will be even more vulgar than the last. We can only hope that those taking the long view are right—that the roots of a diverse and robust American democracy are deep enough to survive the current drought.