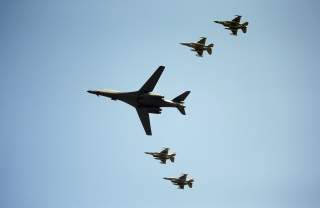 As North Korea’s supreme leader Kim Jong-un and American president Donald Trump—all but indistinguishable in their bellicose rhetoric—continue to lob apocalyptic threats at one another, there has been no shortage of experts assaying the probability of a military showdown, which remains possible despite the respite provided by Kim’s recent announcement that he won’t, for now anyway, follow through with his plan to launch ballistic missiles toward Guam.

The reality, though, is that no one knows how this crisis will end. You’d best change the channel when you hear a talking head making confident prognostications.

What can be foreseen with much greater certainty is how the clash between North Korea and the United States—were it to happen—will unfold.

There are two distinctive paths to war, as exemplified by World War II and World War I.

In the first, the guns start firing because a leader, such Hitler, makes a premeditated decision to use war to achieve goals. Other states may attempt to avoid a conflagration through diplomacy designed to placate the adversary—Neville Chamberlain and Édouard Daladier at Munich in September 1938 for example—but conciliation increases the aggressor’s confidence and thus its demands. Eventually, the states that sought to avoid war realize that they have to fight in order to preserve their security or even their territorial integrity.

In the World War I variant, by contrast, no state wants war; but all make incendiary threats or even incremental moves that slowly—or maybe not so slowly—raise the political temperature and cause the war machine to start cranking up. That creates an atmosphere in which trust is eviscerated, worst-case thinking prevails, and the small steps one side takes (often out of fear) are seen by its antagonists as schemes to seize the so-called first mover’s advantage. (Never mind that, if analogies can be drawn between wars and business, moving first may not prove to be as expedient as leaders caught in crises may assume.)

Amidst the deepening crisis, the reassurances offered by states—of the we-mean-you-no-harm variety—are dismissed as ruses aimed at getting opponents to let down their guard. The possibility of averting war is further reduced by misperception, misinformation, the psychological stress on decision-makers, and leaders’ fear of appearing weak in the eyes of the enemy or of powerful constituencies at home. And in such circumstances, stupidity, unforeseen events, accidents, and hubris inevitably worsen the crisis. Despite the general desire to stop the march toward war, events take control, or those whose decisions count conclude that they have lost the freedom of choice. The momentum proves unstoppable, and the war that no one really wanted, or even imagined, becomes reality.

This second path is the one North Korea and the United States will take if they do go to war. Which brings us back to Messrs. Kim and Trump. The two leaders don’t have a lot in common—except for some traits that are crucial given the situation at hand. Both are solipsistic, narcissistic, impulsive (though Kim doesn’t appear to be a Twitter addict), and no one seems able to rein them in. One fires off a red-hot verbal volley, the other responds with something more sizzling.

Such are their personalities that Kim and Trump may be unable to resist the urge to go beyond words and to demonstrate their toughness with actions aimed at intimidating the adversary. The danger is that each will seek to outdo the other and neither senior officials nor other states—China, Russia, and the major European powers—will be able to restrain them.

We are approaching this dicey stage. To end the sequence of threats and counter threats, one of the two principals, Kim or Trump, must make a conciliatory statement or, better yet, a conciliatory gesture—and the other must reciprocate forthwith. And their top advisers must convince them to negotiate, even if not directly. Given North Korea’s opaque polity we simply don’t know whether there are individuals in Kim’s inner circle with the clout and courage to pull that off, or even to attempt it. What little evidence we have doesn’t give grounds for hope. (Kim, as his top officials will doubtless remember, is a man who had an uncle put to death on suspicion of disloyalty.)

As for Trump’s team, the voices of restraint are already under attack by the members of the administration’s red meat brigade such as Sebastian Gorka, a deputy assistant to the president, who recently savaged Secretary of State Rex Tillerson for attempting to calm the waters. National Security Adviser H.R. McMaster is already on the far right’s hit list for not letting Trump be Trump, something for which General McMaster should get a medal. The widely respected Defense Secretary, General James Mattis, unlike Trump, knows that war is hell; but judging by his recent statements—he warned North Korea that it was risking “the end of its regime and the destruction of its people”—he’s now in follow-the-leader-mode. And UN ambassador Nikki Haley, a neophyte, has been playing gunslinger pretty much since the start of her tenure, evidently hoping to win the love of GOP hardliners in advance of the 2018 election. The upshot is that Team Trump resembles a speeding locomotive without brakes and with a wild-eyed crew of one.

Contrast the current drama to the Cuban Missile Crisis, sparked by the Soviet decision to emplace nuclear missile on Cuba. Both Prime Minister Nikita Khrushchev and President John F. Kennedy refrained from making Armageddon variety threats as the danger of war increased. Each knew that war would be calamitous was determined to prevent it. When Kennedy ordered a naval quarantine of Cuba, which was the least provocative of the steps his advisers recommended, Khrushchev told the approaching Soviet warships turn back. So that Khrushchev could back down with a semblance of dignity, JFK agreed to withdraw American Jupiter missiles from Turkey. His administration had already decided to remove them, but the young president’s wise and opportune initiative enabled Khrushchev to claim that he had gained quid pro quo and hadn’t simply caved in.

Despite the escalating Korean crisis, war is scarcely inevitable, just as it wasn’t in 1914. I depends on whether Kim and Trump reflect on the Cuban Missile Crisis—admittedly different in important respects from the current one—and come to realize that there are actually lessons they can learn or whether they cling to their apparent conviction that they already know all that there is to know, that the objective is to get the other guy to submit, and that diplomacy therefore has nothing to offer.

As for a possible political solution, a non-nuclear North Korea would be ideal—on this China, Russia, and the United States agree. But Kim Jong-un is not likely to dismantle his nuclear arsenal. North Korea has gone to considerable lengths to build it, and previous economic sanctions haven’t made a difference; nor will the latest, more stringent, installment, which bans some of North Korea’s main exports and new investment by other countries. China is North Korea’s economic partner and certainly doesn’t want Kim’s regime to collapse, if only because it won’t be able to escape the consequences.

There is more than one reason North Korea has made doggedly built nuclear bombs and the missiles needed to transport them to distant targets, but one is surely that its leaders regard these weapons as a deterrent to an American attack, something that Kim may fear even more now that Trump sits in the White House. Moreover, the historical record shows that countries that decide to build nuclear weapons despite international condemnation and penalties—consider India and Pakistan—won’t just give them up. That leaves as the most realistic option negotiating arrangements designed to manage a nuclear-armed North Korea so that it won’t sell its nuclear technology, let alone use its nuclear weapons. Success will require United States, China, and Russia to act in concert, but the current state of America’s relations with Beijing and Moscow will make that even more difficult than it ordinarily would be.

Still, it’s certainly worth striving for a grand bargain; but bold and controversial steps will be required to obtain it. One possible solution is the denuclearization of North Korea (backed by stringent verification measures) in exchange for the normalization of US-North Korean relations, multilateral economic aid, and a phased withdrawal of American troops. Our political establishment regards the last of these steps as irresponsible and dangerous; but as I have argued previously in this magazine, the standard claim that South Korea can’t defend itself against a conventional attack by North Korea doesn’t hold up if one compares the two countries, using the typical measures of power. But the time for a mega deal along these lines has probably passed. On the Korean peninsula, the nuclear genie is out of the bottle.

Meanwhile, as this crisis continues to unfold, spare a thought for the people of North Korea and South Korea. As Charles Armstrong reminds us, during the Korean War, the United States dropped more bombs (including napalm) on North Korea than it did in the entire Pacific region during World War II, and an estimated 12-15 percent of North Korea’s population died. Now, ordinary North Koreans find themselves trapped between a despot who seems unfazed by the prospect of war and a mercurial American president who blithely threatens to visit “fire and fury” on their country.