The Cult of Nicholas II 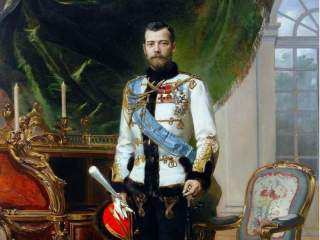 Ever since the USSR collapsed, tourist stalls in Moscow and St. Petersburg have heaved with Soviet knickknacks: Red Army caps and badges, prints of Stalin’s propaganda posters. Today, while much of this is still available, they also tempt visitors to Russia with an increasingly elaborate array of Putin kitsch. On T-shirts, mugs and key rings, Vladimir Putin strikes his signature sunglasses-wearing pose, the image of Russia’s latest strongman ruler.

Taking its cue, much Western reporting increasingly assumes that, in time-honored fashion, the Russians have made a personality cult of their leader, with Putin its subject as Stalin was before him.

In reality, however, actual evidence of such a cult is mixed. Some 19 percent of Russians believe Putin to be the subject of a personality cult and a further 31 percent believe that, though no such cult yet exists, the conditions for one do. But only a minority of Russians—16 to 18 percent—actually own an image of Putin or say they want one. Of course, in a country of 140 million, that still makes for a lot of Putin portraits. But perhaps more significantly, fully three-quarters of Russians nonetheless declare that they wouldn’t buy Putin’s picture. What’s more, they’re not afraid to tell a pollster.

Of course, Russians ought to know a personality cult when they see one. And Putin is undoubtedly popular. But when it comes to their present ruler, the mood seems more one of playful irony, a “people’s patriotism” rather than an awed and unthinking fealty: in the resurgence of national pride sparked by the annexation of Crimea and Western sanctions, printing Putin’s face on cheap cotton T-shirts is both a good way of poking a stick in the West’s collective eye and of making few rubles off goggle-eyed Western tourists.

But the ambivalence of the “cult of Putin” doesn’t mean that there isn’t a sincere cult of another Russian leader—a ruler whose images are the object of genuine veneration. Significantly, however, its subject bears almost no relation to the strongman that Westerners have come to expect Russians to worship.

That leader is Russia’s last tsar, Nicholas II (1894–1917), a figure who in any strongman telling of Russian history could at best hope to play the role of antihero. A popular Putin T-shirt bears the caption, “The politest of people.” That’s ironic. By all accounts, however, Nicholas actually was.

Brutally executed by a Bolshevik firing squad with his family and remaining servants in July 1918, Nicholas, his wife (Empress Alexandra), four daughters (Grand Duchesses Olga, Tatiana, Maria and Anastasia) and only son (Tsarevich Alexei) were named saints and “passion-bearers” by the Russian Orthodox Church in 2000.

Controversial fifteen years ago, this cult of Russia’s “Holy Imperial Martyrs” (as it’s officially known) is now well-established and increasingly visible to the observant visitor. A church dedicated to Nicholas is under construction in Moscow. Others are to be built around the country. Ekaterinburg in the Urals, the site of their execution, is now a major pilgrimage destination, attracting thousands of Russians every year.

Devotional images—icons—of the family are prominently displayed in some of Russia’s most tourist-visited churches, including Moscow’s Cathedral of Christ the Saviour and St. Petersburg’s Kazan Cathedral. Every day in these and other churches across the former Soviet Union, soberly attired men and women cross themselves before these figures known the world over from hundreds of photographs, bow reverently and kiss the corner of their gold-leafed icons. (Needless to say, I have never seen anyone make any sort of obeisance before a picture of Putin—the thought itself is absurd.)

Today’s iconographic convention usually presents the last Romanovs as unnaturally elongated figures with haloed faces and medieval robes. Ironically, this is the kind of garb which, apart from the coronation ceremony in 1896, the real-life Nicholas and Alexandra would only have worn to the “Old Moscow” fancy-dress balls popular early last century: an example is on display in the Kremlin.

In his own lifetime, the tsar was to his detractors Nicholas “the Bloody,” a reference to the hundreds of protesters slain when guards opened fire on a peaceful march on the Winter Palace in January 1905. Today, however, the image of the hapless but sainted tsar is everything the stereotypical Russian leader isn’t meant to be: Nicholas’s doe-like eyes project a benign docility that is light-years from Putin’s steely glare, his silken mantle in perfect counterpoint to Putin’s trademark bomber jacket.

Nicholas’ official church-authorized “Life” supports this contrast too. According to it, Nicholas (who was born in 1868 “on the day of the long-suffering Blessed Job,” the Old Testament prophet) was from childhood distinguished by his “gentleness, tact and mild manners.” Not a tyrant, Russia’s last anointed autocrat was a devoted family man and Russian patriot who fulfilled his duties before God and church, state and family, and who, after his abdication and subsequent arrest in March 1917, displayed a meekness towards his captors that truly reenacted Christ’s humility and submission.

The Life tells us that after his arrest, “the sovereign took up his cross like the righteous [Job] of the Bible, steadfastly enduring all the trials sent down upon him, gently and without a shadow of grumbling” as he made his “way to the Russian Golgotha”—the family’s place of execution in what the Bolsheviks called Ekaterinburg’s “house of special purpose.”

Cited as evidence is the following extract from the diary of the Tsar’s confessor, Father Afanasii, during the family’s captivity:

As meek as a lamb, well-disposed towards all his enemies, not remembering any insults, diligently praying on bended knee for Russia’s well-being, believing deeply in her glorious future, looking ardently upon the Cross and the Gospel, Nicholas the humble slave of God […] expressed unto the Heavenly Father the hidden secrets of his long-suffering life and, casting himself down on the ground before the Great King of Heaven, tearfully begged forgiveness for both his voluntary and involuntary sins.

“I am even ready to give not only my kingdom but also my life for the Motherland,” Nicholas allegedly declared to a general.

His family’s conduct is just as exemplary. Under humiliatingly close watch the Empress and her daughters unsettled their rough soldier-guards, “who heard them against their will,” by “singing ecclesiastical chants.”

Of course, this is worlds away from the bloody autocratic acts of an Ivan the Terrible, Peter the Great or Stalin, supposedly “quintessential” Russian rulers. And yet the celebration of regal meekness and submission to God is nothing new in Russian culture. Indeed, an appealing sense of historical fullness unites Russia’s very first native saints and its very last anointed ruler as slain and sainted dynasts (of two different dynasties).

In 1015, Princes Boris and Gleb, younger sons of Vladimir of Kiev, the first Christian ruler of Rus, were murdered on the orders of their elder brother in the feud for the throne that followed their father’s death. Rather than taking up arms, Boris and Gleb submitted peacefully to their assassins. Not slain for their faith as such, the brothers were celebrated for obeying Christ’s admonition to “turn the other cheek,” even to death. The great twentieth-century scholar of Russian Christianity, George Fedotov, called them “sufferers of nonresistance” nine centuries before Gandhi. “Saints Boris and Gleb,” he wrote, “created in Russia a particular […] order of ‘sufferers,’ the most paradoxical order of Russian saints. […] the Russian Church […] did not discriminate between death for faith in Christ and death in following Christ, and even held the latter in special veneration.”

“Through the lives of the holy sufferers [Boris and Gleb] as through the Gospels,” he concluded, “the image of the meek and suffering Saviour entered the heart of the Russian nation as the most holy of its spiritual treasures.”

To both the Church and the increasing number of ordinary Russians who are inclined to attribute to them an ever-growing number of miracles, Nicholas and his family thus embody what Fedotov called “kenotic holiness”—an outpouring of self in faithful obedience to the teachings of Christ all the more praiseworthy because of their exalted earthly rank. Like Princes Boris and Gleb, the slain and sainted Romanovs have become “sufferers of nonresistance.”

The cult points to other deficiencies in the image of every Russian or Soviet leader since 1917, including Putin’s. Most obviously, Nicholas and Alexandra with their son and daughters are a family: Putin, by contrast, is divorced and his daughters’ lives are something approaching a state secret. Even today, nearly a hundred years after their awful death, the slain Romanovs stand for a model of family life otherwise absent in Russian public culture. (It’s easy to mock, but in a society with one of the world’s highest divorce rates, such models might be more important than we like to think.)

Whether as models of Gandhian nonviolence or as an ideal family, however, the cult of Russia’s Holy Imperial Martyrs can never fully escape its inevitable political significance. Rather, with their images scattered the length and breadth of Russia, it appears both to sanctify and romanticize that “symphony” of church and state—a term of sixth-century Byzantine origin—that, since his 2009 enthronement, Patriarch Kirill of Moscow has presented as the model for twenty-first-century Russia. According to this ideal, church and state do not compete, as in the history of the West, so much as cooperate for the greater good of both, and the salvation of ruler and ruled alike. Significantly, Kirill has called Putin’s presidency a “miracle.”