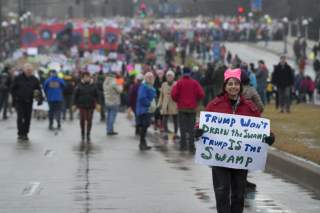 Decades ago Samuel Huntington penned a dismal, dystopian tome about the future of conflict. He predicted a great cultural clash. How right he was—just not in the way he thought.

Witness the rabid reaction to the revised travel ban issued this week by the Trump administration. It reflects not the battle between Islam and the West, but the West waging war with itself.

Huntington's thesis held that “the fundamental source of conflict in this new world will not be primarily ideological or primarily economic. The great divisions among humankind and the dominating source of conflict will be cultural.” In his Futureworld, Western modernity and the Islamic polity would endlessly clash.

Certainly, we have problems along these lines today. Look no further than Europe's unsettling efforts to accommodate immigrants and refugees from the Middle East. It's a deeply complex situation, one that reflects European economic malaise, the collapsing European welfare state and failed multiculturalism as much as the Islamist terrorist threat that thrives in the dark, damp clammy spaces in between.

Yet, arguably, Europe is experiencing more a case of cultural friction—rather than an outright clash—between civilizations. For every fault line between the greater Islamic World and the West, there is a bridge of economic, military, political, culture and civil society holding the world together.

That's not say there the United States and the rest of the West don't have serious problems with balancing patriotic assimilation and cultural diversity. This is an enduring challenge for free and open societies, and one that we must get right. But that's different than saying the West is at war with the rest of the world.

The bigger cultural war in the West is between Trump and his critics. On the one side is a new administration fiercely committed to tearing down the institutional constructs of progressivism and globalism. On the other, are those seeking to destroy the last remnants of nationalism. It's a battle that is not confined to America. Brexit was the first big offensive in a parallel conflict in Europe.

As this battle of ideas has escalated, so too has the rhetoric. Increasingly, both sides seek to demonize the other camp.

Indeed, a key tactic of the “resistance” against Trump is to accuse his administration of fomenting Huntington's dreaded clash of civilizations. Labeling Trump's policies as “fascist” and “racist” only douses smoldering differences with gasoline.

That's not a new rhetorical attack vector. The same tactics were used against Bush, most famously in the kerfuffle over the Patriot Act. Rather than have an honest debate over appropriate measures to combat terrorism in the post-9/11 world, Bush's opponents went postal.

The American Civil Liberties Union raised millions by mischaracterizing the act as a threat to Americans. Their website still admonishes: “While most Americans think it was created to catch terrorists, the Patriot Act actually turns regular citizens into suspects.” But the ACLU should realize that that culture war is over. The Patriot Act has been around for more than a decade and a half now, through Republican and Democratic administrations. Yet the Constitution is just fine, and there no concentration camps full of American citizens.

But old habits are hard to break. Since labeling Bush an anti-Muslim fascist seemed to work—at least as a money-maker if not as a winning policy argument—doing the same to Trump looks to be a no-brainer to the Left.

Arguably, Trump's opponents couldn't have picked a better target than his executive order pausing some refugee and other traffic into the United States. After all, all seven countries subject to the order’s travel restrictions were majority Muslim. The administration was just getting its feet on the ground. Further, the White House did a poor job rolling the measure out, and it was unprepared for a swift and sweeping counterattack.

But that was over a month ago. Now, the White House is back with a sequel, issuing its revised and updated order yesterday. And opponents are as angry as ever—and using the same talking points. For example, they’re still characterizing the executive order 2.0 as “anti-Muslim.”

Yet the travel restrictions never were designed to be anti-Muslim. Rather, they were clearly intended to address a legitimate, emerging security threat: the likelihood that, after ISIS is defeated on the battlefields, its surviving foreign fighters will flow into these countries and from there try to make their way to the West. Their goal: to pull off terrorist attacks in the midst of the enemy to prove that transnational Islamist terrorism is still in the fight.

The revised order is built to address that threat. Moreover, it has been constructed in a way to make clear that it is not anti-Muslim. First, all of the original order’s references to religious minorities have been removed, undercutting the argument that somehow the order was intended to disadvantage Muslim travelers at the expense of others.

In addition, the revised order removes a predominantly Muslim country—Iraq—from the ban. The reason for its removal is telling. After the first order was issued, the Iraqi government agreed to implement additional security measures that made terrorist travel from the country less likely. Since enhance security is the true purpose of both orders, this adjustment make perfect sense.

A Department of Homeland Security official said of the revised order that there were no current plans to add any more countries, Muslim or otherwise. But he also said that, after the implementation phase, they would assess what steps to take next. That's the right answer. The global Islamist terrorist threat is dynamic. The U.S. response should be dynamic, determined not just to keep up with—but to stay ahead of—the threat.

Meanwhile, in the West, the culture wars will doubtless continue. All we can ask is for more maturity from both sides to keep legitimate security measures out of the crossfire.