The Current U.S. Approach to Russia Has Failed: What Should Trump Do? 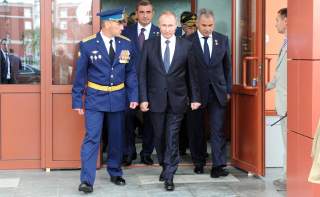 The current U.S. approach to Russia has failed. Moscow is ostensibly isolated and subject to tough sanctions. Yet it has not appreciably changed its course on Ukraine or Syria, it is dramatically escalating and broadening the conflict via nuclear saber rattling, cyber-attacks and information warfare.  Meanwhile it has reestablished considerable influence throughout the Middle East, the former Soviet region, even East Asia and Latin America. What is to be done?

First, we need to stop obsessing over Putin. Our problem is with Russia. Putin stands in the mainstream of a centuries-old Russian foreign policy tradition and worldview and he enjoys broad elite support and popular consent in his policies. Any approach, premised mainly on "being tough" with Putin or on charming him into making a deal, misses the point entirely.

Second, we need to stop pursuing policies with the expectation either that Russia will change into a friendly democracy or that it can be fully defeated and sidelined. Neither is remotely likely in the foreseeable future. Instead, we need an approach to engaging Russia that extracts the best balance of cooperation and competition from across a web of interrelated issues. How we deter Russia in the Baltic will influence when and how hard Russia pushes in Syria, just as how we frame a deal on Ukraine and sanctions relief will shape Russia’s options for energy and economic engagement, whether with China and Iran, or with US allies in Europe and East Asia.

Finally, we need to reestablish dialogue. Not for its own sake, but as an indispensable tool for advancing our national interests. Closing the door on previously established bilateral channels was a mistake, yet another case of the "we talk to reward good behavior and don't talk when we disagree" syndrome in US diplomacy. When Washington declares it will no longer talk to Russia about Syria, that doesn't change the reality that Russia holds the keys to stopping the humanitarian catastrophe and re-launching negotiations aimed at a durable settlement. When we seek to impose diplomatic isolation, it creates an incentive for the Russians to raise the risk level—such as with near miss incidents at sea and in the air—until we are forced to talk.

Most of all, we need coordination and consistency on our side. The worst kind of policy is the kind that every official, politician and observer understands differently. The next president will need a trusted senior figure to ride herd on the U.S. bureaucracy, and to serve as the main channel between the White House and the Kremlin. That job is needed when relations are going well just as when they are going badly.

A version of this article appeared in the NYTimes here.