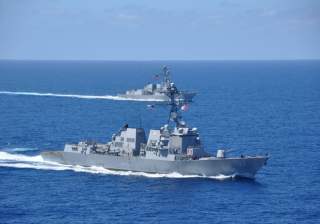 As China emerges as the predominant indigenous power in Asia, it has become a pivotal force to a simultaneous process of integration and fragmentation in the region. On the economic front, China’s various initiatives, from the Asian Investment Infrastructure Bank (AIIB) to the "One Belt, One Road" new Silk Road megaproject, hold the promise of addressing growing infrastructure needs in Asia, further deepening existing trade and investment linkages in an increasingly prosperous region.

Although, it must be said, China is most likely also driven by broader, long-term geopolitical motivations in pushing for these seemingly business-oriented ventures, especially since heavily investing in other countries’ infrastructure is also a bet on a lasting strategic partnership—if not a chokehold on their strategic sectors.

When it comes to regional security, however, China has become a polarizing force, gradually threatening freedom of navigation in one of the world’s most important Sea Lines of Communications (SLOCs), the South China Sea, not to mention its dangerous jostling with Japan in the East China Sea; provocative maneuvers against India along contested Himalayan territories; and relatively obscure but intensified disputes with South Korea in the Yellow Sea.

And it is precisely this destabilizing behavior that has unsurprisingly become a central theme of Asia’s premier security conference, the Shangri-La Dialogue, an annual conference in Singapore organized by the International Institute for Strategic Studies (IISS). In many ways, it is the Davos of the world’s defense chiefs and security wonks, and has served as one of the best barometers for gauging the geopolitical pulse of the Asia-Pacific theater.

This year’s Shangri-La Dialogue certainly lived up to expectations, showcasing spirited presentations by the United States, China, and Singapore. Each of these countries reflected the views of stakeholders in the region and beyond. What is clear is that, as Beijing relentlessly alters the status quo in the South China Sea, many neighboring countries, including traditionally neutral countries like Singapore, have been deeply alarmed. Meanwhile, Washington has finally begun to more decisively flex its military muscle to rein in Chinese adventurism. With China brazenly admitting that it could impose an Air Defense Identification Zone (ADIZ) in the South China Sea, Washington and its regional partners are scrambling to protect freedom of (civilian and military) navigation in international waters.

Mediating the Clash of Titans

For long, the tiny and prosperous city-state of Singapore has punched well above its weight, serving as a critical mediator among Pacific powers, particularly Beijing and Washington. The late Lee Kuan Yew, among the 20th century’s greatest and longest serving leaders, was a master of international diplomacy, carefully maintaining an optimal strategy of equi-balancing towards the two great powers. Singapore’s founding father constantly sought to assuage fears over the return of post-Mao China into the international fold, while advising his counterparts in Beijing to consider the strategic anxieties of its neighbors, maintain cordial ties with Washington, and embrace globalization with a pragmatic outlook. As a result, Singapore has arguably become a linchpin of and a prime platform for dialogue over the existing security architecture in Asia.

For the tiny Southeast Asian nation, the future of Asia is anchored by a healthy competition and broadly symbiotic relationship between the United States and China. Since the late-2000s, however, Singapore has become increasingly alarmed by China’s overbearing attitude and more aggressive pursuit of sweeping territorial claims in neighboring countries. As one of the world’s most trade-dependent economies, which heavily relies on re-processing imported basic commodities and producing high-value-added exports, Singapore has a direct stake in maintaining stability in SLOCs, particularly the Strait of Malacca and the South China Sea. Singapore has no illusions about the intentions of great powers, so it has also developed one of the most modern and well-equipped armed forces in the world.

Fears of a power vacuum—and full-blown Chinese hegemony in Asia—has prompted Singaporean leaders to grant the U.S. Navy greater rotational access. Singapore’s leaders also encouraged the Obama administration to fortify its trade and investment relations in Asia, lest China translates its economic dominance into unfavorable strategic bargains for neighboring countries. Lee Kuan Yew’s son, the current prime minister and a former Brigadier-General, has become increasingly vocal about the necessity of a rule-based resolution of the South China Sea disputes. As a firm believer in balance of power, he has also emphasized the importance of America’s commitment to the region, since Washington’s naval muscle is the best possible deterrence against full-blown Chinese maritime adventurism.

Singaporean Prime Minister Lee Hsien Loong’s keynote speech at the Shangri-La Dialogue was indicative of how even non-claimant states in Southeast Asia are now deeply alarmed by the developments on the ground, and are eager to see, if not directly facilitate, a mechanism to manage the disputes and prevent them from spiraling out of control. He was steadfast in emphasizing how the disputes “should be managed and contained,” and warned “if the present dynamic continues, it must [sic] lead to more tensions and bad outcomes.” Interestingly, the Singaporean leader, whose country is soon taking over as the ASEAN-China country coordinator, pushed the diplomatic envelope, declaring “China and ASEAN should conclude a Code of Conduct on the South China Sea as soon as possible” in order to arrest a “vicious cycle” in the region.

The Singaporean prime minister explicitly called for “all parties adhere to international law, including the UN Convention on Law of the Sea (UNCLOS),” boldly declaring, much to China’s chagrin, “that is the best outcome”—an indirect statement of support for the Philippines ongoing arbitration case against China. Last year, when he made a similar statement in the United States, China reportedly filed a diplomatic demarche, pressuring Singapore to retract its position. But it seems that Singapore is holding its ground.

In another indirect jab against China, he also reiterated how “if the outcome [of disputes] is determined on the basis of might is right, that will set a very bad precedent” and how the future of the regional order “cannot be maintained by just by superior force.” It is not a farfetched proposition to assume that Singapore’s point of view is shared by majority of countries in the Asia-Pacific region and beyond. With the exception of Beijing, hardly anyone tried to justify or downplay China’s destabilizing actions in international waters.

The Dance of Elephants

The much-anticipated speech by U.S. Defense Secretary Ashton Carter came on the heels of a weeks-long American effort to push back against Chinese belligerence in the South China Sea. The defense secretary emphasized how his country “will fly, sail, and operate wherever international law allows, as U.S. forces do all over the world.” It was a justification of Washington’s ongoing efforts to directly challenge China’s construction activities.

In the past few weeks, the United States has deployed surveillance aircrafts and warships close to the 12 nautical miles radius of China’s artificially-built islands in the South China Sea, prompting strong warning from China about potential escalation and military counter-action. But Washington seems determined to stick to its gun, and demonstrate its willingness to stand up to China and enforce “freedom of navigation” operations and oppose “restrictions on international air or maritime transit.”

The question is whether the United States will go so far as to enter into the 12 nautical miles of Chinese-claimed features in the Spratly chain of islands, since many of these features are low-tide elevations, which can’t be appropriated and can’t generate their own territorial waters. Carter didn’t say anything that bars that option so clearly this is an operational and political decision under consideration. Carter was also careful and astute in emphasizing how Washington’s efforts are in step with regional norms and the interests of allies and partners, who seek to maintain stability in international waters.

The United States also unveiled a $425 million defense initiative to enhance the naval and coast guard capabilities of Southeast Asian countries. It is a critical (and subtly packaged) initiative to enhance the ability of regional allies and strategic partners to push back against China and deter further adventurism. This is in step with earlier suggestions and efforts by the Pentagon to augment the capabilities of regional states, including the proposed establishment of an International Maritime Operations Center (IMOC) in Indonesia, which could provide necessary support for multilateral patrol operations in the Western Pacific and Indian Ocean. Australia has also reiterated its determination to maintain patrols in the South China Sea, a clear sign of support for the American position, while Japan, under the revised U.S.-Japan bilateral defense guidelines, is contemplating joint aerial patrols in the South China Sea.

Interestingly, however, China’s defense delegation engaged in bilateral dialogues with its Japanese and Vietnamese (but not Filipino) counterparts, continuing a months-long process of institutionalizing high-level dialogue with key maritime rivals in adjacent waters, while putting a PR spin on its massive construction activities in the South China Sea.

Chinese Admiral Sun Jianguo, echoing earlier Chinese Foreign Ministry’s statements, claimed that his country’s actions are "justified, legitimate and reasonable" and that the purpose of its construction activities are to actually provide "international public services," such as humanitarian relief and rescue operations. He said "Confrontation must be replaced with cooperation," alleging that other parties are instigating trouble. China has dismissed any suggestion that its construction activities pose a threat to freedom of navigation, and at times, quite astonishingly, has portrayed itself as the victim of bullying by other countries.