The Dark Side of the American Revolution 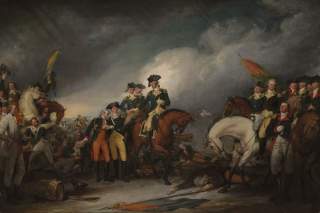 Equally dyspeptic is Taylor’s description of the writing of the Declaration of Independence. He frames this historic moment as financially motivated:

“Independence would help Congress secure the foreign assistance needed to fight the mighty British. Visiting Philadelphia, French agents assured congressmen that France could provide little aid unless assured that the Patriots would break with Britain and form a union strong enough to provide a stable diplomatic partner.”

Moreover, he contends that the list of grievances Jefferson, Franklin and Adams compiled was dishonest, since by “dwelling on recent events generated by the war, that indictment slighted the issue that had started the whole conflict: Parliament’s attempt to tax the colonists.” The king was demonized for propagandistic purposes, and that was that. This, it must be recalled, is the document that Jefferson called (in a quotation not included in this book), “an instrument, pregnant with our own fate and the fate of the world.” He added,

“May it be to the world, what I believe it will be . . . the signal of arousing men to burst the chains, under which monkish ignorance and superstition had persuaded them to bind themselves, and to assume the blessings of self-government.”

Those phrases give an indication of the stakes for which the Patriots felt they were fighting. Jefferson wrote them two weeks before his death. Within his lifetime, the Declaration of Independence he penned was imitated in one form or another by twenty countries, including nations in northern and southern Europe and the Caribbean. Today, more than half the countries in the world have founding documents, with many nodding at Jefferson’s Declaration. Such a document deserves better treatment than what it receives here—even if the war was bloodier than Mel Gibson’s The Patriot would have us believe.

Jordan Michael Smith is the author of the Kindle Single, Humanity: How Jimmy Carter Lost an Election and Transformed the Post-Presidency.

Image: John Trumbull’s The Capture of the Hessians at Trenton. Wikimedia Commons/Public domain.