The Day After Tomorrow: Preparing for the Aftermath of an Iranian Nuclear Deal 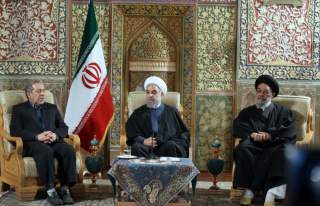 With the June 30 calendar date for a final, verifiable nuclear agreement fast approaching, Iranian and P5+1 negotiators in Geneva are swiftly nearing the time when incredibly difficult decisions need to be made. Diplomacy between Tehran and the P5+1 over Iran’s nuclear weapons program has been ongoing for roughly twenty-one consecutive months; indeed, the first round of preparatory talks started even before Hassan Rouhani was elected as Iran’s president in a resounding victory in August 2013. The last week and a half will determine whether or not all of this time and expended political capital—an effort that has been particularly controversial in Washington and Tehran—will ultimately result in a comprehensive agreement that all parties can live with.

Predictably, the last few days approaching the June 30 deadline have been the toughest and most politically fraught for all of the countries currently at the table. How fast the Iranian Government will receive economic sanctions relief; the amount of money Tehran will receive once a nuclear deal is signed; the extent to which IAEA inspectors will be granted access to Iran’s military facilities across the country; and the mechanism to ensure that an Iranian violation will be met with a quick re-imposition of sanctions are all open questions.  In fact, the same question can often elicit dramatically different answers depending upon who is asked—if Ayatollah Ali Khamenei had his way, the Iranians would feel economic relief on the very same day that the agreement is signed. U.S. officials, meanwhile, are adamant that any loosening of economic sanctions is tied specifically to Iranian compliance. And, of course, President Rouhani has his own assessment of the situation, telling reporters during a news conference that it will take only “a couple of months” for the Iranians to access the money that has until now been frozen in overseas bank accounts.

This is to say nothing of the political dynamics in Washington, where a large segment of the U.S. Congress remains concerned about the type of deal that the Obama administration is negotiating and the amount of concessions that the White House is willing to provide to a state sponsor of terrorism.

Yet, even with all of these issues yet to be sufficiently resolved, there is a reasonable enough chance that the United States, its negotiating partners, and the Iranians will in fact find the political will necessary to sign on the dotted line. For the first time in the tumultuous 35-year history between the United States and the Islamic Republic of Iran, officials in both countries are openly talking about the possibility of coming together to resolve a conflict.  This shift in tone by itself is a vast improvement in the relationship.

It is therefore necessary, indeed prudent, to survey the regional landscape after an agreement is signed by the June 30 negotiating deadline. What will the oil market look like once Tehran is permitted to sell its crude oil without restrictions? Will Iran’s foreign policy in the Middle East change in any discernible way? And will a successful U.S.-Iran nuclear accord drift into other areas of policy?

Whether or not one agrees with what the international community is prepared to offer Iran in exchange for nuclear restrictions, there is a universal belief that United States, EU, and UN sanctions hurt Tehran’s economy to such an extent that Ayatollah Khamenei was forced into a dialogue. According to U.S. Government estimates, the Iranian Government has lost approximately $160 billion of its own money as a result of prohibitions on overseas banking transactions. The cap on the amount of crude oil Iran can export to customers around the world—the sanctions prohibit Iran from exporting more than one million barrels per day, well below the 2.5 million barrels per day the government was selling before 2012—has hit its bank account hard. So hard, in fact, that the Iranians are losing $1.6 billion in oil revenue every month judging by its own figures. For a country that relies on oil money for a big percentage of its national budget, this loss is incredibly distressing.

Unfortunately for the Iranians, their bottom-line is likely to continue to suffer even if oil and banking sanctions are lifted once an agreement is put into place. Although Tehran will once again gain access to tens of billions of dollars that were previously out of their reach, the Rouhani administration will be operating in a global energy environment that is drastically different from even a year ago. The $115 per barrel price of crude oil that was common last spring is now within the $60-$65 range—a decrease of roughly 45%. Assuming that Iran is able to increase its export capacity to 2010 levels in a short period of time, the country would still fall roughly $112.5 billion short from what it would have earned five years earlier. Even this figure is generous, because an influx of Iranian crude in the global market will drive oil prices down further.

In other words, the Iranian economy will continue to hurt in revenue despite having the oil sanctions relaxed after an agreement is signed and implemented.

Will a successful nuclear accord have the effect of moderating the Iranian Government’s Middle East policy? This is a critical debate that policymakers in Washington have been engaging in ever since the very first meeting in Geneva occurred. President Barack Obama appears to believe that this in fact will be the case. During an extensive interview with NPR News on April 7, President Obama put forth the argument that the moderates in the Iranian regime could increase their leverage over people like Ayatollah Khamenei and the Iranian Revolutionary Guard Corps when sanctions relief begins to filter down to ordinary Iranians. “[I]f in fact the Rouhani administration—the forces that are more moderating…” Obama said, “if they are shown to have delivered for their people, presumably it strengthens their hand vis-a-vis some of the hardliners inside of Iran.”

Much of the U.S. Congress, Republicans and Democrats included, have come away with a far different conclusion: that is, most of the money freed up by a lifting of sanctions will go straight into the coffers of the IRGC-Quds Force and the Iranian military instead of the Iranian people. While this conclusion may seem overly pessimistic, the prospect is compelling enough for the likes of Saudi Arabia, the United Arab Emirates, and its allies in the Gulf Cooperation Council (GCC)— countries that are preparing for further Iranian aggression in the region once nuclear-related restrictions are lifted in full. Washington, Europe, the UN Security Council, and the rest of the international community would be derelict in their duty if they failed to take Arab and Israeli concerns seriously.

Although the Obama administration has argued that Iran would be more likely to use the additional money that comes from sanctions relief on domestic needs like shoring up its currency or improving manufacturing, it is difficult to believe that at least some of those funds won’t be used to further Iran’s allies and proxies in the Middle East. At a time when Bashar al-Assad is losing territory north, south, and east of Damascus to various Syrian opposition groups, the $6 billion that Iran provides to the Assad regime annually is all but certain to increase once Tehran is afforded access to its overseas accounts. The assistance will be a welcome reprieve to a beleaguered, casualty-ridden and tired Syrian army whose ranks have atrophied during the past four years of the Syrian civil war.

Maintaining proxies requires a persistent degree of material support. To date, Iran is providing support in various degrees to forces from Lebanon to Afghanistan, including Hezbollah, Hamas, Palestinian Islamic Jihad, the Taliban, the Syrian army, the pro-Assad National Defense Forces, Iraqi Shia militias, the Iraqi army, and the Houthi rebels in Yemen. Sanctions relief, while certainly required for the P5+1 to get a verifiable and iron-clad deal, will provide the IRGC with more resources to sustain this network. This is exactly why Saudi Arabia, the GCC, and Israel are so worried about a nuclear agreement—not because it paves the way to a nuclear bomb, as Israeli Prime Minister Benjamin Netanyahu repeatedly says, but because it gives Tehran more fuel to destabilize the region.

President Obama may hope that Iran’s foreign policy changes for the better, but it’s equally likely—if not more so—that it will change for the worse. The United States and its allies in Europe and the Middle East need to prepare for, if not expect, this development.

The dispute over Iran’s nuclear program has been a serious international security issue for at least the past thirteen years. Despite the often confusing sanctions architecture that has been brandished against Tehran, Iranian scientists have managed to strengthen their knowledge base and capability in terms of the amount of enriched uranium Iran can produce and the quality of centrifuges the country can develop. Yet the multilateral sanctions regime proved effective enough to compel Iran’s Supreme Leader to endorse and even publicly support negotiations over the country’s nuclear infrastructure. If the P5+1 and Iran are able to come to a compromise that prevents the latter from possessing the ability to acquire a nuclear weapon, President Obama would be granted a legacy achievement and the world would be afforded the opportunity to stave off nuclear proliferation in the world’s most violent region.

But we should also prepare ourselves for the post-June 30 security environment. Iran’s foreign policy will not change, U.S.-Iran relations will remain incredibly strained due to a vast gap in interests and values, and the Iranian people will likely continue to suffer from a mismanaged national economy.