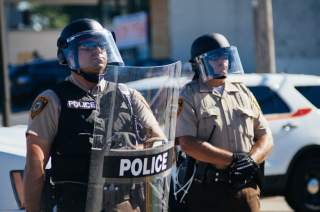 For almost two years, a protest movement known as “Black Lives Matter” has convulsed the nation. Triggered by the police shooting of Michael Brown in Ferguson, Missouri, in August 2014, the Black Lives Matter movement holds that racist police officers are the greatest threat facing young black men today. This belief has triggered riots, “die-ins,” the murder and attempted murder of police officers, and a campaign to eliminate traditional grand jury proceedings when police use lethal force.

Even though the U.S. Justice Department has resoundingly disproved the lie that a pacific Michael Brown was shot in cold blood while trying to surrender, Brown is still venerated as a martyr. And now police officers are backing off of proactive policing in the face of relentless venom directed at them on the street and in the media. Violent crime, as a result, is on the rise.

The need is urgent, therefore, to examine the Black Lives Matter movement’s central thesis—that police pose the greatest threat to young black men. I propose two counterarguments: first, that there is no government agency more dedicated to the idea that black lives matter than the police; and second, that we have been talking obsessively about alleged police racism over the last twenty years in order to avoid talking about a far larger problem—black-on-black crime.

Thankfully, such calls are rarer today than in the past. In New York City in 1990, for example, there were 2,245 homicides. In 2014 there were 333—a decrease of 85 percent. Nationwide, crime has fallen at a historic rate as well—by about 40 percent since the early 1990s. The greatest beneficiaries of these declining rates have been minorities: over ten thousand minority males alive today in New York would be dead if the city’s homicide rate had remained at its early 1990s level.

What is behind this historic crime drop? A policing revolution that began in New York and spread nationally. Starting in 1994, the top brass of the NYPD embraced the then-radical idea that the police can actually prevent crime, not just respond to it. They started gathering and analyzing crime data on a daily and then hourly basis. Equally important, they held commanders accountable for crime in their jurisdictions. Department leaders started meeting weekly with precinct commanders to grill them on crime patterns on their watch. These weekly accountability sessions came to be known as CompStat. They were ruthless, high-tension affairs. If a commander was not fully informed about every local crime outbreak and ready with a strategy to combat it, his career was in jeopardy. CompStat was widely adopted, keeping police departments intensely focused on where people are most being victimized, and that is in minority communities.

In terms of economic stimulus alone, no other government program has come close to the success of data-driven policing, which has opened up previously crime-ridden neighborhoods for new businesses and residents. But the crime victories of the last two decades, and the moral support on which law and order depends, are now in jeopardy thanks to the falsehoods of the Black Lives Matter movement.

Police operating in inner-city neighborhoods now find themselves routinely surrounded by cursing, jeering crowds when they make a pedestrian stop or try to arrest a suspect. Sometimes bottles and rocks are thrown. Bystanders stick cell phones in the officers’ faces, daring them to proceed with their duties. Officers are worried about becoming the next racist cop of the week and possibly losing their livelihood thanks to an incomplete cell phone video that inevitably fails to show the antecedents to their use of force.

As a result of the anti-cop campaign of the last two years and the resulting pushback in the streets, officers in urban areas are cutting back on precisely the kind of policing that produced the two-decades-long crime decline and that is now being denounced as lethally biased. Policing is political. If a powerful political bloc denies the legitimacy of assertive policing, we will eventually get less of it. Arrests and summons are down, particularly for low-level offenses. Police officers continue to rush to 911 calls when there is already a victim. But when it comes to making discretionary stops—such as getting out of their cars and questioning people hanging out on drug corners at 1:00 a.m.—many cops worry that doing so could put their careers on the line.

But the people demanding that the police back off are by no means representative of the entire black community. Go to any police-neighborhood meeting in Harlem, the South Bronx or South Central Los Angeles, and you will invariably hear variants of the following: “We want the dealers off the corner.” “You arrest them and they’re back the next day.” “There are kids hanging out on my stoop. Why can’t you arrest them for loitering?” The irony is that the police cannot respond to these heartfelt requests for order without generating the racially disproportionate statistics that will be used against them in an ACLU or Justice Department lawsuit.

Unfortunately, when officers back off in high-crime neighborhoods, crime shoots through the roof. Our country is in the midst of the first sustained violent-crime spike in two decades. Murders rose 17 percent in the nation’s fifty-six largest cities in 2015, and it was in cities with large black populations where the violence increased the most. Baltimore’s per capita homicide rate last year was the highest in its history. Milwaukee had its deadliest year in a decade, with a 72 percent increase in homicides. Homicides in Cleveland increased 90 percent over the previous year. Murders rose 83 percent in Nashville, 54 percent in Washington, DC, and 61 percent in Minneapolis. In Chicago, where pedestrian stops are down by 90 percent, shootings were up 80 percent through March 2016.

I first identified the increase in violent crime in May 2015 and dubbed it “the Ferguson effect,” triggering a firestorm of controversy. FBI Director James Comey has twice confirmed the Ferguson effect and has been promptly rebuked by President Obama for doing so, because to recognize the connection between proactive policing and public safety undermines the entire premise of the anti-cop Left. Though the vast majority of victims in the current crime surge are black civilians, police officers are coming under attack as well. Contrary to the Black Lives Matter narrative, police officers are at much greater risk from black people than unarmed black residents are from police officers. Over the last decade, an officer’s chance of getting killed by a black person has been 18.5 times higher than the chance of an unarmed black person getting killed by a cop. And now, some officers are hesitating to defend themselves when confronting violently resisting black suspects. We have been here before. In the 1960s and early 1970s, black and white radicals directed hatred and occasional violence against the police. The difference today is that anti-cop ideology is embraced at the highest reaches of the establishment: by the president, by his attorney general, by college presidents, by foundation heads and by the press. We are playing with fire, and if it keeps spreading, it will be hard to put out.