The Decline of the Democratic Party Has Arrived 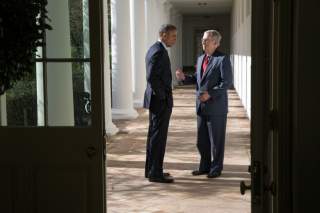 It’s always risky, in political commentary, to ascribe much significance to any particular election. While it’s tempting to see voting results as marking a turning point in the path of the nation, such turning points are rare. Seldom do we see real directional changes, even in big elections in which the standings of the two parties are reversed. Consider 1994, when Republicans captured both houses of Congress by picking up fifty-two House seats and nine in the Senate. That did not usher in a clear Republican era. Or the combined elections of 2006 and 2008, when Democrats gained thirteen Senate seats, fifty-two House seats and also captured the White House. Those congressional gains have all been lost now, and the White House is very much up for grabs.

Most often, elections reflect the voters’ biennial task, which they take seriously, of assessing the performance of the party in power. When the assessment is negative, the electorate turns to the opposition in hopes that it will do better. When it does, it gets rewarded with office retention; when it doesn’t, it gets kicked out just like the previous party. And the nation moves forward within a channel represented by the traditional political philosophies of the two parties.

But sometimes there are genuine signs in the election returns that something significant may be happening. And the returns of November 4 may reflect such a development. Two articles written since the Republican blowout explore these intriguing signs.

One was a New York Times commentary, published on November 11, by Thomas B. Edsall, who has few peers as a political analyst of the left. Entitled “The Demise of the White Democratic Voter,” the piece pulled together voting and polling statistics suggesting that the Democratic Party is in danger of losing the white vote almost entirely. Edsall points out that whites made up 75 percent of this year’s electorate and voted for Republican House candidates by a 24-point margin—62 percent to 38 percent. He notes that 72 percent of whites without college degrees—generally, what is known as the white working class—believe that “the U.S. economic system generally favors the wealthy.” And these same people voted for Republican House candidates 64 percent to 34 percent.

(You May Also Like: How One Man Could Obliterate Obamacare)

Edsall reminds us that whites, by overwhelming numbers, say that President Obama’s Affordable Care Act will make things worse for them and their families and also will harm the nation generally. He notes that the health measure shifts health-care benefits and tax burdens from upper-income Americans to lower-income Americans and “from largely white constituencies to beneficiaries disproportionately made up of racial and ethnic minorities.” It reduces spending, for example, on Medicare—which serves a population that is 77 percent white—by $500 billion over ten years. And it transfers much of that money to Medicaid, whose recipients are 59 percent minority.

Edsall says the Republicans have a plan to pull in a large chunk of the remaining white Democratic voters—middle-income suburbanites, who are socially liberal, but increasingly conservative on fiscal matters. These voters also are increasingly angry about Democratic tax policies, seen by many as another effort to transfer wealth from whites to minorities. Edsall cites Larry Hogan’s upset victory in the Maryland gubernatorial contest and Cory Gardner’s Senate triumph in Colorado. Both hammered their Democratic opponents on the tax issue.

(You May Also Like: Obamacare: Nothing Short of a Disaster)

“Arguably,” writes Edsall, “the poor Democratic showing among whites does not represent naked race prejudice, as Obama’s election and reelection attest. But it can be seen as a reflection of substantial material interests that affect the very voters who carry greater weight in low turnout midterm Congressional elections.”

The next day the Wall Street Journal’s Dan Henninger weighed in with a piece entitled, “It Wasn’t Just Obama.” He covered much of the same territory as Edsall in assessing the significance of the election returns—the stunning GOP victory in Maryland, Scott Walker’s reelection in Wisconsin, Republican gubernatorial wins in Massachusetts and Illinois. And he goes further in exploring the Democratic tax-and-spend policies that seemed to stir voter ire at the polls. Particularly noteworthy was the tax spree of Maryland’s outgoing Democratic governor, Martin O’Malley, who in two terms raised some forty taxes and fees. These included the corporate income tax, sales tax, personal income tax and a “millionaire’s tax,” as well as a passel of fees on license plates, liquor, fishing, birth and death certificates, “even something called ‘stormwater management fees’ based on the size of people’s roofs, driveways, patios and such.”

Henninger zooms in on the significance of all this in noting that the Democrats are the party of the state and public sector. “Over a long period,” he writes, “the costs of maintaining the state have risen inexorably, especially in the North due to public-union costs and transfer payments.” The problem is that there isn’t enough money in the public coffers to pay for the governmental structure that is the foundation of the Democrats’ political standing.

(You May Also Like: 5 Worst US Presidents of All Time)

Unwilling to restructure government, state Democrats turned to taxes. “First,” writes Henninger, “they raised taxes on large business. Then the ‘wealthy.’ Then came the fees and regulatory costs for smaller businesses. In Maryland and Illinois, companies and the wealthy fled.”

But it still wasn’t enough, so Democratic politicians (and some Republicans, notes Henninger) started imposing regressive fees across the board. Then comes a passage that gets to the crux of the matter:

“Which means the party’s pols are now siphoning cash straight out of the budgets of their blue-collar and middle-class base. That hurts.”

The Henninger observation overlaps significantly with the Edsall analysis, but goes a step further in identifying the underlying problem for Democrats. They have constructed a governing coalition—government bureaucrats, public employee unions, recipients of transfer payments—that requires more financial resources than the party can generate without alienating the middle class. You can’t govern without the middle class. Henninger captures it with the best line since election night: “It was good being the party of Robin Hood. Until they morphed into the Sheriff of Nottingham.”

Based on endless television interviews and Obama’s postelection news conference, it seems the Democrats are salving their wounds with two thoughts—first, this is merely the midterm elections and in presidential elections their constituency will come out in force and rescue them again; and second, those troublesome whites are going to be overrun demographically at some point, anyway, so there’s nothing to worry about.

This isn’t a governing philosophy. It isn’t even a philosophy. Many Democratic analysts figured that the demographic changes washing over America would hand them a governing position in the country without a fight. But that isn’t how democratic politics works. There’s always a fight, as the 2014 election returns demonstrate.

Robert W. Merry is political editor of The National Interest and the author of books on American history and foreign policy.