The 'Deep State' Conspiracy Is a Joke 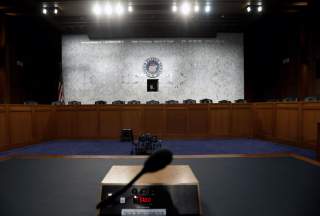 IT IS unclear when the Deep State was created, or created itself. The moment of creation, however, almost certainly took shape in the twentieth century. Candidates for creating the Deep State, or permitting it to create itself, are Franklin Roosevelt or Harry Truman: Roosevelt for domestic purposes, Truman for international purposes.

As a machine that runs itself, its members almost certainly are senior career civil servants in every cabinet department and agency. That means, at least, fifteen cabinet departments and anywhere from seven to fifteen principal agencies. To be effective, the minimum number of Deep State members must be at least a hundred per department and agency. Thus, the core of the Deep State would be in the neighborhood of two or three thousand individuals. It therefore seems almost indisputable that they wield immense and largely unchecked influence.

Over time, senior officials retire and must be replaced. If this mysterious State arose under Roosevelt, then there must have been over time some tens of thousands of secret members of the Deep State.

Were they required to take an oath of secrecy to join this covert government? That must have been part of the arrangement; otherwise one book, not to say a whole library, would have been published by now describing in thrilling detail how it all works.

Perhaps the Deep State has enforcers who take care of those who squeal. Great research question: how many members or former members of the Deep State met untimely and violent deaths?

And where has the Washington press corps been all these years? Anyone remember a Pulitzer Prize for uncovering the Deep State right under their noses?

Amazing that it took President Donald Trump, who had never participated in government or spent much time in Washington, to reveal this secret. Perhaps he is waiting for the appropriate moment to document the existence of the Deep State and its membership.

As a veteran of a few years’ service at the U.S. Departments of Justice and Interior, I can testify that there was little evidence of Deep State activity. Almost to a person, the career civil servants were intelligent, diligent, hardworking and highly knowledgeable about their responsibilities. They could, of course, have been sly devils meeting in the furnace room after hours, passing out assignments for subverting the current administration. How were we to know?

Believers in the Deep State surely hold open the possibility that the Russian government and its FSB have known about this all along. They would, of course, have passed on what they know to their new friend, but circumstances being what they are, he would be foreclosed from employing them as his principal source of intelligence. Speaking of which, Deep State members must be all over the dozen-and-a-half agencies in the intelligence community.

From the Masons to UFOs, Americans have loved mysteries. Once it was established that George Washington was a Mason, among other Founders, we have let that mystery go. There are still those pesky UFOs that somehow pop up, much like Arthur M. Schlesinger Jr.’s cycles of American history, every twenty or thirty years.

Kurt Anderson’s new book calls this Fantasyland, and the Deep State has its own neighborhood there.

If you are out to practice the politics of distraction, how better to do it than to place a bright spotlight on the Deep State? And it has the added advantage of nourishing and feeding the “base,” as well as accounting for unfulfilled campaign promises.

Where is P. T. Barnum when we need him? But wait, perhaps we have him after all—and he is the consummate ringmaster.