The Deep State Is Very Real 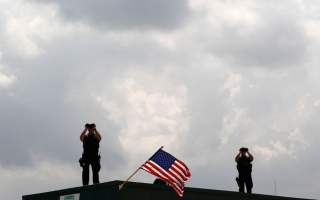 James Burnham saw it coming. The American philosopher and political theorist (1905–87), first a Trotskyist, then a leading conservative intellectual, wrote in 1941 that the great political development of the age was not the battle between communism and capitalism. Rather, it was the rise of a new “managerial” class gaining dominance in business, finance, organized labor and government. This gathering managerial revolution, as he called it, would be resisted, but it would be impervious to adversarial counteractions. As the managerial elites gained more and more power, exercised often in subtle and stealthy ways, they would exercise that power to embed themselves further into the folds of American society and to protect themselves from those who might want to bust them up.

Nowhere is this managerial elite more entrenched, more powerful and more shrouded in secrecy than in what Dwight Eisenhower called the military-industrial complex, augmented by intelligence and law-enforcement agencies. That’s where America’s relentless drive for global hegemony meshes with defense manufacturers only too willing to provide the tools of dominance.

Now we have not only a standing army, with hundreds of thousands of troops at the ready, as in Cold War days. We have also permanent wars, nine of them in progress at the moment and not one with what could even remotely be called proper congressional approval. That’s how power gets entrenched, how the managerial revolution gains ever greater force and how the Deep State endures.

Few in the general public know what really happened with regard to the allegations of Trump campaign “collusion” with Russia, or how the investigation into those troubling allegations emerged. But we know enough to know we have seen the Deep State in action.

We know that U.S. agencies released an “Intelligence Community Assessment” saying that Russia and President Putin were behind the release of embarrassing Democratic emails in a plot to help Trump win the presidency. But we also know that it wasn’t really a National Intelligence Assessment (a term of art denoting a particular process of expansive intelligence analysis) but rather the work of a controlled task force. As Scott Ritter, the former Marine intelligence officer and arms-control official, put it, “This deliberate misrepresentation of the organizational bona fides of the Russia NIA casts a shadow over the viability of the analysis used to underpin the assessments and judgments contained within.” Besides, the document was long on assertion and short on evidence. Even the New York Times initially derided the report as lacking any “hard evidence” and amounting “essentially . . . to ‘trust us.’”

We have substantial reason to believe that an unconfirmed salacious report on Trump, paid for by the Democratic Party and the Hillary Clinton campaign (with the FBI eventually getting hold of it), was used in an effort to get a secret national-security warrant so the government could spy on the Trump campaign. We know that the FBI went easy on Clinton in its investigation of her irresponsible email practices, and then we find out that a top FBI official involved in both the Clinton and Trump/Russia investigations despised Trump, liked Hillary and expressed an interest in doing what he could to thwart Trump’s emergence. We know he privately told his lover that, while he didn’t think Trump could win, he nevertheless felt a need for an “insurance policy” because “I’m afraid we can’t take that risk.” We know these matters were discussed in the office of FBI deputy director Andrew McCabe.

We know further that former FBI director James Comey used a cutout to leak to the press a rendition of an Oval Office conversation with the president that could be interpreted adversely to Trump. We know he did this to set in motion the appointment of an independent investigator, a potentially mortal threat to any president—and perhaps particularly to this freewheeling billionaire developer.

Perhaps most significant, we know that all this had the effect of wrenching from the president the flexibility to pursue a policy agenda on which he had campaigned—and which presumably contributed to his election. That was his promise to work toward improved relations between the United States and Russia. Prospects for such a diplomatic initiative now are as dead as the dodo bird. Trump lost that one. The Deep State won.

Robert W. Merry, longtime Washington journalist and publishing executive, is editor of The American Conservative. He is the author most recently of President McKinley: Architect of the American Century.