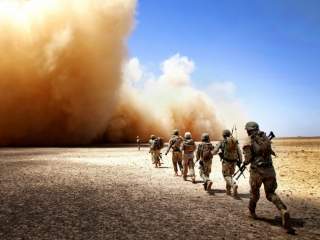 America spent the last thirty years attacking illusory foes or defending purported friends in the Middle East, sacrificing blood and treasure, polarizing our polity and forfeiting influence. Our misadventures resemble a game of blindman’s buff, our record that of a perennial cellar-dwelling football team.

Consecutive American administrations turned the ball over several times without moving it downfield. We barge into Middle East conflicts like a drunken bar brawler. What induced this addiction?

We are sodden with chauvinist demagoguery and questionable analogies: “appeasement,” “terrorism,” “hostages,” “democracy,” “totalitarianism” and “mushroom clouds.” The invaders of Iraq never envisioned a clash of sects, of civilizations. We overthrew a “totalitarian dictator” with “weapons of mass destruction.” We had won hot and cold wars against totalitarian imperialists, so as losing commanders often do, we fought a past war.

The carnage today is religious and dynastic, what the Qur’an terms a fitna. This Qur’anic "discord" is not conducted by global imperialists, but by holy warriors, equipped by local states, dynasties and great powers. This mosaic bears a close resemblance to the Thirty Years’ War and the preceding century of godly disputes—a Christian fitna that lasted not thirty but 130 years.

The slaughter of 1618–48 actually began in 1517, when Martin Luther nailed his theses to Wittenberg’s church. Protestants found support among rulers coveting unmitigated sovereignty, while backers of the Counter-Reformation included the Vatican, the Hapsburg Dynasty, Catholic monarchs and the decaying Holy Roman Empire.

Today's Islamic fitna commenced in 1979, when Ayatollah Khomeini installed a Shiite regime challenging equally theocratic Sunni Saudi Arabia for Islamic hegemony. 1979 closed with a Soviet intervention to salvage its "godless" Afghan satellite. Thereupon, along with other Sunni Arab rulers, the Kingdom exported its troublemakers for jihad against Soviets and Persians.

The Thirty Years’ War likewise was a clash of dynasties, not only of denominations. Protestant sects and states challenged Hapsburg Catholic rule. As in that war, along with sects and dynasties, likewise rudimentary nation-states clash in the greater Middle East with armies backed by outside powers. The flashpoints of this fitna were the U.S. intervention in Iraq and Syria’s “Arab Spring.” The West overthrew Libya’s dictator while, as in Iraq eight years earlier, lacking the faintest idea of what would follow. Qaddafi’s realm descended into tribal warfare. In each of these countries, the Islamic State (aka IS, ISIS, ISIL and Daesh) now thrives. Yet Al Qaeda affiliates wrestle with their Daesh soul mates in Syria and Lebanon, just as Calvinists turned on Lutherans, and the Catholic Bourbon dynasty betrayed the Hapsburgs. The clash of sects, dynasties, states and proxies in the Middle Eastern strife may last longer than Europe’s century of similar combustion.

The attacks of 9/11 offered the Bush administration a pretext to topple Iraq, which had replaced Iran as our Satan. Of course, Al Qaeda, which detested secular Iraq, was the actual culprit. The result was to strengthen Iran, now our newest demon.

The fitna soon spread to Syria, Lebanon and several Gulf states. Last year Saudi bombed a Yemeni Shia militia, an attack denounced by our other key “ally,” Shia Iraq, yet cheered by the American president. Previously another U.S. “ally,” Egypt, bombed IS in Libya and offered to oppose Daesh in Syria.

Daesh has proclaimed a Caliphate. Its establishment obliges “true” Muslims to migrate to a state where an antique version of sharia law severs the hands of thieves, beheads captives and stones adulterers while legalizing slavery and crucifixion. Women are turned into concubines and children as young as ten into soldiers.

Daesh and Al Qaeda, though equally Salafist-jihadi, are very different animals. In 2001, Al Qaeda funded terrorist projects and occasionally offered training and advice, as in 9/11. Its embryonic franchises are now guerrilla bands. IS, unlike Al Qaeda, enlists men and women directly into an army and “state” which focus on “the near enemy.”

Moreover, IS, unlike Al Qaeda, embraces takfir (that is, to pronounce another Muslim an apostate). For takfiris like Daesh, or the Algerian GIA (Armed Islamic Group), Muslims who shave their beards, sell alcohol or drugs, wear Western clothes or vote (even for a Islamist party like the Muslim Brotherhood) are “apostates,” not merely, as for Al Qaeda, sinners. For IS such Muslims are enemies to be enslaved, tortured and/or murdered like other “infidels.”

Graeme Wood has demonstrated in the Atlantic that Daesh was the direct descendant of the takfiri Abu Musab al-Zarqawi, the ruthless late commander of Iraq’s terrorists before he perished in a 2006 U.S. bombing. Western media described Zarqawi as head of “Al Qaeda in Mesopotamia.” But he called his group The Islamic State of Iraq. In a 2004 article, I asked, “Are bin Laden and Zarqawi running competing terrorist organizations?” and ended by noting:

“Historically speaking, the dynamic of revolutionary movements favors the most radical faction--the Jacobins, not the Girondists, the Bolsheviks, not the Mensheviks. If this dynamic prevails in contemporary Sunni terrorism, Abu Musab al Zarqawi represents the future.”

Zarqawi’s IS heirs regrouped and awaited the departure of U.S. troops demanded by the lamentable liege we installed in now Shia Iraq. Then along with abandoned US arms, funds from Sunni Gulf states enabled ISIS to acquire swathes of Syria and Iraq over which Daesh’s emir Abu Bakr al-Baghdadi declared a “Caliphate.”

“the caliphate and the expansion to contiguous lands are paramount. Baghdadi has said as much: [telling] his Saudi agents to ‘deal with the rafida [Shia] first… before the crusaders and their bases.’”

Thus “the near enemy” (e.g. Iraq, Syria, Jordan and Israel) and not Al Qaeda’s “far enemy” (the West) is the main target of the Islamic State. For millenarian IS, living the apocalypse, the Qur’an is observed with the literalism of those who believe the world was created in six days. By 2016, more than thirty-five thousand recruits had joined the caliphate, doubling IS in one year.

Europe’s jihadis burst back into the news last year, primarily thanks to ISIS’s adept use of social media. Over five thousand European post-immigrant youths have trained with the Islamic State. An estimated 10 percent of returnees are prepared to assault their parents’ adopted country.

IS explained its Parisian atrocities as retaliation for France’s air and sea assaults on Daesh in Syria—the most extensive Western intervention there. Despite cries from Washington politicians and pundits that those Paris assaults signify “a global terrorist threat,” IS’s focus remains on “the near enemy.”

The Islamic State recruits men and women, nurses and doctors, technocrats and schoolteachers. It presents IS-labeled backpacks to schoolchildren.

“Brand Caliphate” offers not merely jihad but an Islamic state, a utopia in the form of a dystopia. The IS utopian appeal is as potent today as was Stalin’s Soviet Union, Mao’s China, Fidel’s Cuba and Sandinista Nicaragua.

Our Next Middle East War?

Daesh’s penetration of Egypt was perhaps its most resounding achievement last year. That came shortly after the bloody overthrow of the elected—if incompetent, reckless and divided—Muslim Brotherhood government of Mohammed Morsi. In a well-engineered coup, General Abdel Fattah el-Sisi, Morsi’s chosen Interior Minister, massacred peaceful protesters and jailed and tortured liberals, journalists, and tens of thousands of Brotherhood activists and alleged sympathizers. A former Muslim Brotherhood youth told Al-Monitor his fellow-prisoners’ craving to join Daesh had reached "IS fever."

Such recruits have extended the reach of IS beyond the lawless Sinai desert abutting Israel to the opposite desert, neighboring Libya, presently an IS redoubt. The worried Israeli Defense Forces now allow Sisi to deploy forces in the Sinai, beyond the Camp David Accords’ authorization.

IS has also infiltrated the neighboring Gaza Strip. Last June, Daesh militants declared on video from Aleppo: “We will uproot the state of the Jews and you [Hamas] and Fatah [the PLO]… will be overrun by our creeping multitudes.” Yet Israel’s Prime Minister Benjamin Netanyahu insists the danger comes from the north, Iran, not the south. Should Daesh storm Israel, will American troops again find themselves in a Middle Eastern war?

Numerous Israeli security officials advised us not to invade Iraq in 2003. Henry Kissinger recently stated, "If I had known everything then that I know now, I probably would not have supported [the Iraq invasion].” He explained that what he didn’t know was “the extent of the cleavage between Shia and Sunni.” Prior to the invasion no one was better briefed or more persistently courted than Kissinger. So clearly, America’s preeminent diplomat was not alone in what he “didn’t know.” But our vice president and other neoconservative firebrands insisted: “The road to Jerusalem leads through Baghdad.” Now it may lead through Cairo.